Consumer protection’s beloved grandpa is retiring today. For 20 years, Ernest Cassirer has been a staple in the Attorney General’s Consumer Resource Center in Seattle, taking countless calls from curious, concerned and frequently crass consumers. And he’s done it for free. 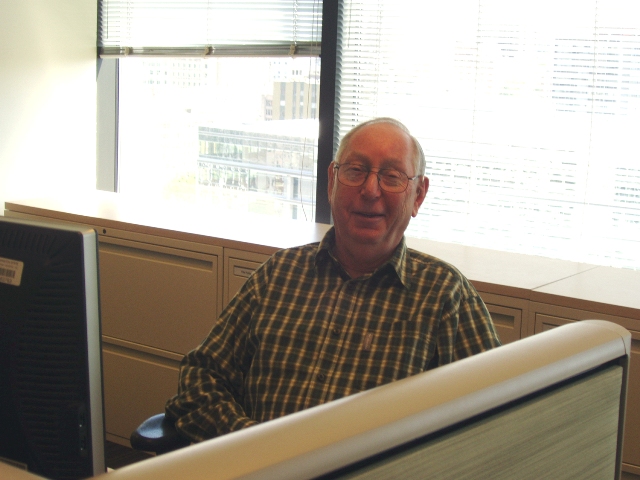 Ernie, who recently celebrated his 80th birthday, has volunteered here since January 1991 – commuting twice a week from his home in Kent. In the last two decades, he has provided more than 10,000 hours of dedicated public service. His contributions to consumer protection, as well as his personal life story, are extraordinary.

CRC staff frequently quip that when the moon is full, the weird calls come in. Just ask Ernie. After a 38-year career as a Quality Assurance Lead for Boeing – during which he worked on the Lunar Orbiter Program and “non-existent” black box projects – he launched another mission. He’s been here since, charting the vast, ever-changing consumer protection landscape. Our office and consumers statewide are the luckier for it.

Tap Ernie for a tale about working the CRC hotline, and he’s an ever-flowing fountain of entertainment. Here are a couple from a staff newsletter article aptly titled “Service in Ernest” as tribute to Ernie’s fondness for puns:

Ernest recalls one consumer who sent an audio tape of “brake squeal” to illustrate her displeasure with an unsatisfactory brake job. Or another recent case in which a citizen was upset with a collection agency’s constant calling due to her non-compliance with an agreed upon payment plan. Her solution? She wanted to be transferred to a different collection agency. And the list goes on. 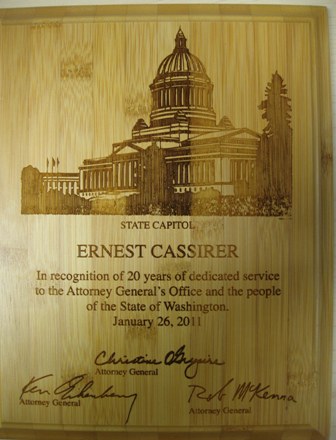 Ernie had manned the phones for only a month when he was recognized for helping bring about a lawsuit against a diploma mill known as Gold Coast College. As described by then-Attorney General Ken Eikenberry, “We received our first consumer call on Wednesday. Due to quick action by a new CRC volunteer, Ernest Cassirer, … we served the defendant on Friday evening and filed the case Monday.”

During a retirement party today, Ernie was presented with an AGO pin and a plaque engraved with the signatures of three attorneys general he’s served.

Consumer Protection Division Chief Doug Walsh quipped, “Ernest has broken in three attorneys general. Ken Eikenberry and Chris Gregoire ran for governor to get away from him.”

Ernie, as usual, was the humble joker.

“The State of Washington has a big budget shortfall. You’re saving about $5.50 [the cost of his subsidized train fare] now for every day I’m not here.”

Before he leaves us, however, he noted that he needs to finally turn in his “temporary” employee badge.