Alcoholic energy drinks in the news

KOMO TV reports on a drunken Auburn teen who called the cops on herself: 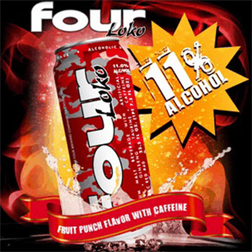 Just after 5 a.m. Monday, state troopers received a call from the young woman, who said she was underage, "very drunk" and staring to lose her vision. She said she was pulled over on the southbound shoulder of State Route 167.

The caller said she'd been unknowingly given alcohol at a party, and that her friends had told her to call police to take her to the hospital. (Listen to the 911 call)

A trooper arrived on the scene and found the bloodshot-eyed driver sitting in the car with a 20-ounce alcoholic energy drink in the cup holder.

The driver told the trooper she'd been sipping on the 12-percent alcohol drink while driving, and that she'd had four more of the same at the party she was coming from. She added that her arm was growing numb.

Under pressure from state attorneys general, the federal Food and Drug Administration has announced plans to crack down on 30 manufacturers of caffeinated alcoholic beverages.

Dr. Joshua Sharfstein, principal deputy commissioner of food and drugs, said it’s time for the FDA to look into the safety and legality of the products and pull them from the marketplace if they don’t meet federal standards.

Washington Attorney General Rob McKenna was one of those pushing the federal government to crack down on the super-caffeinated alcoholic concoctions with names such as “Joose” and “Max Fury.” McKenna says the manufacturers market the products to young people. Surveys show that as many as 26 percent of college-age students are consuming the caffeinated alcoholic beverages.

If you'd like to learn more about this subject, check out our most recent press release on AEDs.