Honoring a hero of open government 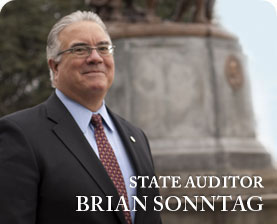 Sunshine Week, which began Sunday, is a national initiative to promote open government and freedom of information.  It’s also a great time to celebrate a true hero of government openness and accountability.

Every four years starting in 1992, a yard sign was seen around the state that read, “Hire Brian Sonntag State Auditor.” The sign represents Brian’s attitude that elected officials are the employees and the people are the boss. Upon being elected — and reelected four times in decisive victories — Brian immediately went to work following through on his promise of servant leadership.

Brian often found that being accountable to the public, as opposed to a political party or a collection of interest groups, landed him in the crosshairs of other elected officials. His tireless search of government waste, for example, made a number of people uncomfortable – especially those defending the status quo. Being a change agent isn’t always easy, yet Auditor Sonntag persevered.

I’ve had the honor of working with Brian on an issue that matters to both of us: access to government information.  In 2008, Auditor Sonntag and I asked legislators to require the taping of executive sessions of government bodies. These meetings are necessarily held behind closed doors because they involve confidential personnel matters or competitive bids. Yet our constituents often complain that non-sensitive matters are illegally tacked on to such meetings. Our proposal to create audio records of executive sessions was opposed by local governments and bottled up in legislative committees. This year our proposals to simply allow the recording of executive sessions suffered a similar fate.

Auditor Sonntag and I also share a concern about complaints of violations of the cornerstone laws enabling you to peel back the curtain and view the inner-workings of government: the Public Records Act (PRA) and the Open Public Meetings Act (OPMA). Citizens with complaints that these laws have been violated file costly lawsuits against government agencies. Others simply throw up their hands and walk away without the information they sought.
Looking for a solution, in 2009 we created an Open Government Task Force, which recommended the creation of an administrative board to rule on complaints of violations. We also recommended that elected officials be trained to better understand the Open Public Meetings Act.  Unfortunately, the Legislature declined to act on these recommendations.

This year, Auditor Sonntag launched a Web site that provides data submitted to his office regarding local government finances. It’s an easy to use tool. Simply plug in the name of your city government, for example, to find out exactly how your tax dollars are spent.

“Under his leadership and advocacy, open government reforms took center stage,” wrote Jason Mercier of the Washington Policy Center, upon learning that Brian would retire. “His efforts to improve government accountability casts a long shadow that will continue to be seen for years to come.”

In the Everett Herald, Mercier also pointed out that Brian was in the unique position of being able to serve as “state auditor for life.” I tend to agree.

This Sunshine Week, it’s appropriate to focus on where we’ve succeeded and where we may yet do better to make sure that everyday people have access to government information. But it’s also a great time to remember the gold standard by which future leaders ought to be measured on promoting transparency and accountability. While we won’t have the opportunity to hire Brian Sonntag as State Auditor again, we hope that his example provides inspiration to those who follow in his footsteps.