Both leaked hundreds of gallons of fuel into Puget Sound, clean-up costs could exceed $1 million

OLYMPIA— Attorney General Bob Ferguson and Commissioner of Public Lands Peter Goldmark today announced two sets of criminal charges against the separate owners of two derelict vessels that recently sank in Pierce and Kitsap counties, dumping hundreds of gallons of fuel into Puget Sound.  The charges are the first environmental crimes involving derelict vessels to be filed by the state of Washington in recent history.

“These men abandoned vessels containing hazardous waste in Washington state waters, creating a serious public health risk and damaging our environment,” Ferguson said. “If you break our state laws and pollute our environment – we will hold you accountable.”

“I deeply appreciate Attorney General Ferguson’s leadership and commitment to helping to hold the owners of derelict vessels accountable for the damage they do to the environment and the economic losses they cause taxpayers," Goldmark said.

Commissioner Goldmark leads the DNR which administers the Derelict Vessel Removal Account, providing funding and expertise to help public agencies remove and dispose of vessels across the state. The account provides funding to various state and local agencies — such as the state Dept. of Ecology — to address derelict or abandoned vessels in their jurisdictions. 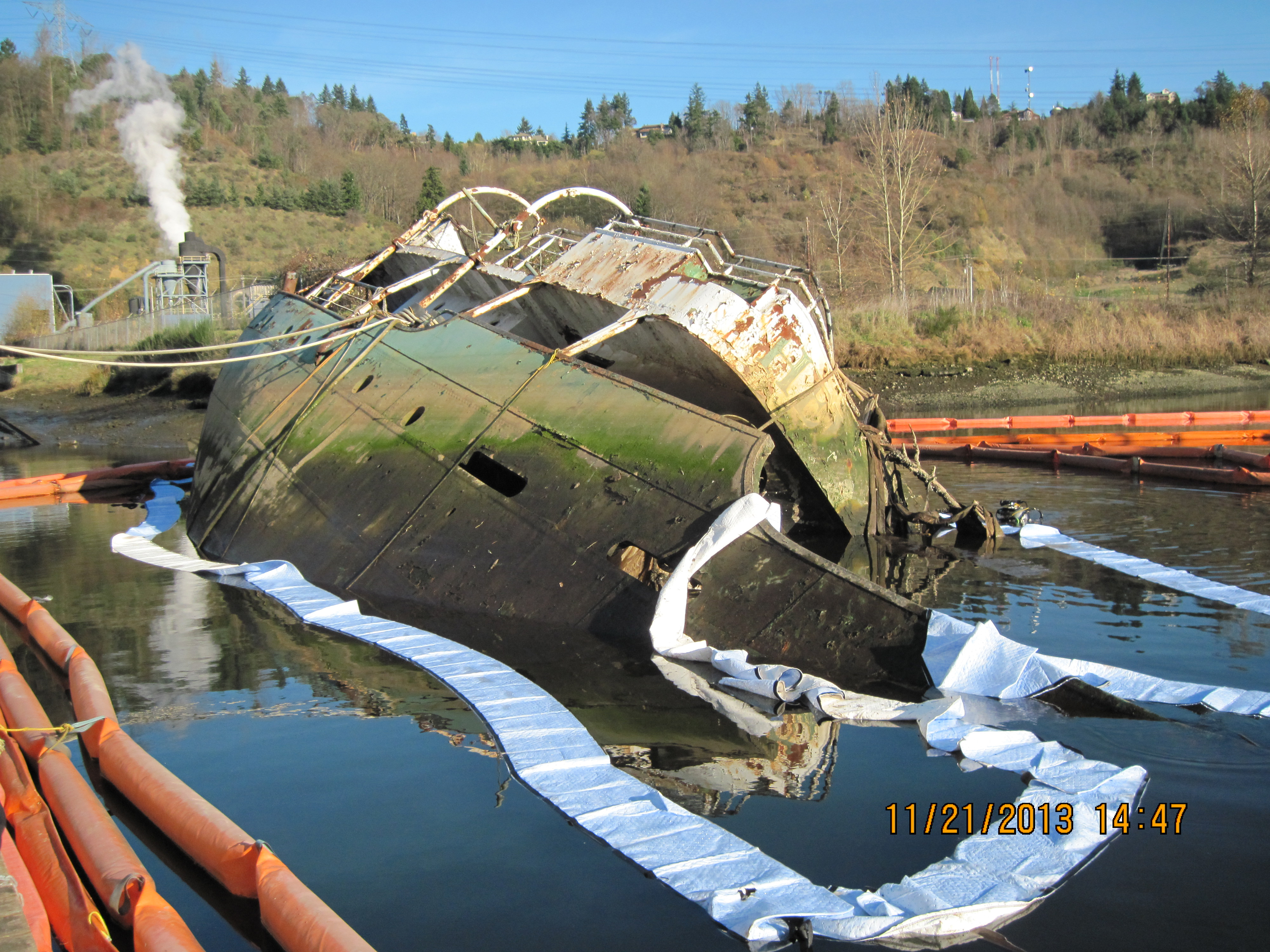 The Attorney General’s Office (AGO) charged Stephen C. Mason with one count of causing a vessel to become abandoned or derelict   and one count of discharge of polluting matters into state waters after Mason’s vessel, the Helena Star, sank in Pierce County, releasing hundreds of gallons of fuel and oil into the Hylebos Waterway.

After receiving several complaints about the condition of the Helena Star, staff from the U.S. Coast Guard and the state Dept. of Ecology boarded the 167-foot vessel on Feb. 29, 2012.

On March 2, 2012, the U.S. Coast Guard notified Mason the vessel posed an imminent danger to public health and the environment because it was either already leaking or about to leak oil and other hazardous materials into the waterway.

After Mason failed to address the problem, the U.S. Coast Guard hired a contractor to remove some of the oil and hazardous material from the vessel.

An investigation revealed Mason— or perhaps others acting on his behalf— removed items of value from the Helena Star before it sank, which could have contributed to the ship’s sinking. Mason abandoned the sunken ship in the waterway where it remains to this day.

The state Dept. of Ecology estimates it will cost hundreds of thousands of dollars to raise, tow, dismantle, recycle and dispose of the sunken vessels and to remove any pollution threats.

The state is paying for this operation through the federal Oil Spill Liability Trust Fund and through a one-time legislative appropriation to the state’s Derelict Vessel Removal Program. The Legislature approved $4.5 million for the disposal of the Helena Star and other abandoned or derelict vessels.

Affidavit of probable cause

Dept. of Ecology Fact Sheet on the Helena Star

The AGO also charged Anthony R. Smith with one count of theft in the first degree, one count of causing a vessel to become abandoned or derelict and one count of discharge of polluting matters into state waters, after his abandoned vessel, the historic Tugboat Chickamauga, sank and released petroleum products into waters near Bainbridge Island.

According to court documents, Smith paid first and last month’s moorage fees to Eagle Harbor Marina after piloting the Chickamauga there in February 2013. Smith failed to make any other payments on his moorage fees, and failed to respond to requests by the Harbormaster to address the failing condition of his boat.

On Oct. 2, 2013, the Chickamauga sank with roughly 400 gallons of diesel fuel and 10 gallons of lube oil on board when it sank.

According to the state Dept. of Ecology Web site, salvage crews had patched the Chickamauga’s hull and restored the vessel to float without support by Friday, Oct. 10, 2013.

In addition to the penalties for abandoning the vessel and polluting the waters, theft in the first degree is a Class B felony, punishable by up to 10 years imprisonment and a $20,000 fine plus restitution, assessments and court costs.

Affidavit of probable cause

More information on the Chickamauga