SEATTLE — Attorney General Bob Ferguson today filed a consumer protection lawsuit against a man who for nearly a decade engaged in an elaborate scheme, using a fictional business and promises of employment, to deceive women into posing for nude photos and having sex with him.

The complaint alleges Hickey created an elaborate business enterprise that offered and advertised commercial services solely for his personal gain and sexual gratification, never attempting or intending to follow through on the promised services.

“This is one of the most egregious scams I’ve seen as Attorney General,” Ferguson said. “Beyond the monetary damage his victims suffered pursuing the defendant’s fictional job opportunities, they endured emotional trauma and unconscionable loss of privacy through his deception.” 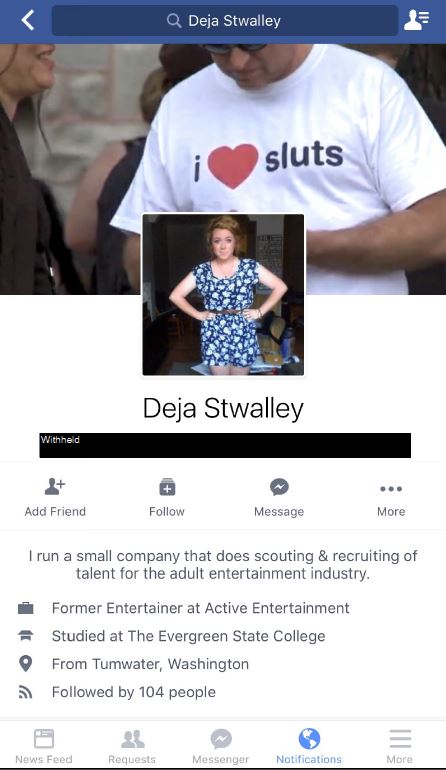 Hickey, however, had no intention of helping these women find jobs. He created a fake business in order to convince his victims to pose for nude photos and have sex with him as part of a phony “audition” process.

Beyond the Stwalley profile, which was deliberately cultivated with more than 1,000 friends, Hickey further created a veil of legitimacy with fake business websites, email addresses and a Google Voice number with a Las Vegas area code.

Hickey identified young women between the ages of 17 and 25 on Facebook, contacting them through Stwalley’s profile and presenting them with an opportunity to audition for a local indie/alternative adult film studio. Stwalley assured many woman that they “TOTALLY have the look they’re going for” and could earn anywhere from $1,200 to $3,500 a day. To be considered for these upcoming opportunities, all they needed to do was “audition with one of our specially chosen ‘hunks’.”

All auditions were conducted by Hickey, often at his apartment or a Seattle hotel.

The audition was a three-step process. First, prospective actresses underwent a “job interview” that included presenting a driver’s license and answering a series of questions that served to “figure out what kinds of work you’re interest in doing, sexual preferences, prior experience, and so on.”

Hickey, posing as Stwalley’s photographer, often read these questions aloud from a typed questionnaire form. He then wrote down the verbal responses and asked women to sign the bottom of the questionnaire. Hickey misled women into signing a photo release contract that claimed that the nude photos were “for the purposes of scouting proofs and reference material for employment only.”

In fact, Hickey used these photos for his own purposes, and to this day, the photos still appear online.

After the job interview, the women participated in a nude photo shoot with Hickey. Stwalley and New Seattle Talent described these photos as “mug shots” that are sent to “studio producers and videographers to see what they’ve got to work with.”

Finally, prospective actresses auditioned by having sex with Hickey. “Stwalley” told women that the sex was an “attitude test” necessary to secure jobs. Stwalley explained that Hickey’s written review of each woman’s sexual performance would be included in her talent portfolio.

After the audition, Hickey would string victims along for months, even years. Hickey—as Stwalley—told women, “I got a bite for you” and “I have a ton of producers for you to meet.” Stwalley even named specific film studios that she claimed had reviewed the woman’s audition materials and “liked the photos.” Hickey often used these fake claims of interest to schedule additional photo shoots.

In reality, Hickey never made any effort to find to find work for his victims, and he had no contacts or experience in the adult entertainment industry.

Hickey also created a second fake profile named Chrissy Baaten to serve as an endorsement of Stwalley and her business. That profile was registered with the email address fakegirl@matthickey.com.

Baaten wrote to one woman, “I’m in the industry. Deja hooked me up last year AND I LOVE IT.” Through this fake account Hickey assured women that they could make considerable money working with Stwalley. Baaten also told women that they should be taking photos with Hickey “every six months at least.”

The complaint asks the court to order Hickey to stop his deceptive practices, provide restitution to victims and impose civil penalties of up to $2,000 per violation. Each unfair or deceptive act Hickey committed in furtherance of his “business” could constitute a separate Consumer Protection Act violation.

Once Hickey has been served with the complaint, he will have 30 days to respond.

If you believe you are a victim of this scam or have been contacted by Matt Hickey posing as someone else online, please contact our investigator Charlann Schakel at (206).389.3850 or at CharlannS@ATG.WA.GOV.

Complaints related to this case or other consumer issues can also be filed at atg.wa.gov/file-complaint.