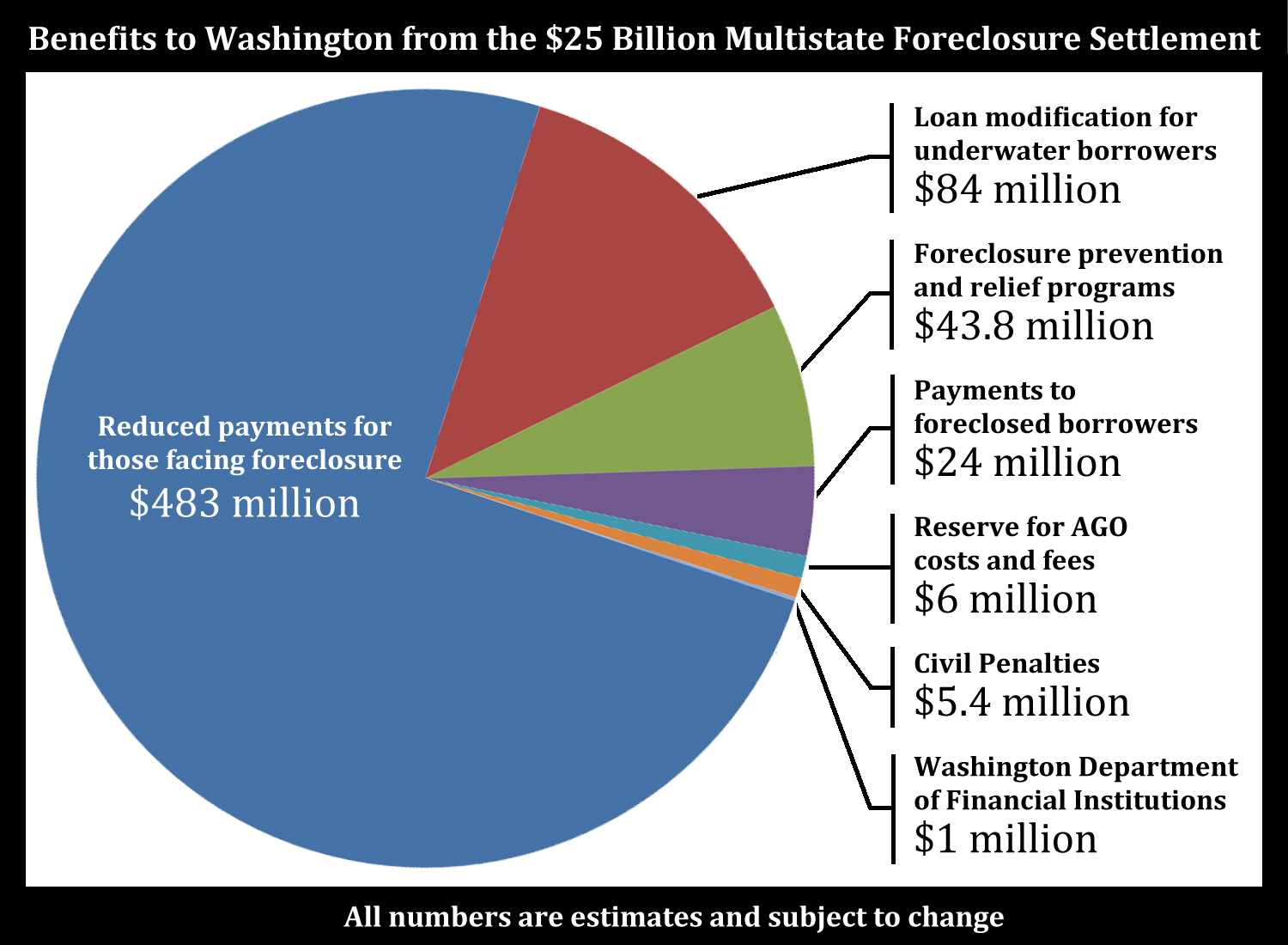 SEATTLE – Nearly a year of intense negotiations over mortgage servicing and foreclosure abuses has resulted in the largest consumer financial protection settlement in U.S. history. Thousands of Washington state homeowners stand to benefit who have already lost their homes or are struggling with mortgages larger than the value of their property.

“As regulators, one of the primary benefits we see from this settlement are the behavioral changes and expectations going forward that we expect to see these entities living up to,” DFI Director Scott Jarvis said. “We don’t want to experience again what so many have gone through in this mortgage crisis and foreclosure epidemic.”

Bank of America Corporation, JPMorgan Chase & Co., Wells Fargo & Company, Citigroup, Inc., and Ally Financial, Inc. (formerly GMAC) have agreed to an aggressive new effort to reduce monthly mortgage payments for millions of struggling homeowners – including some who are current with their payments but, because they owe more than their home is worth, don’t currently qualify for a refinance. One-time payments will go to many who already lost their homes. The settlement also puts in place a long list of new protections for mortgage-holders – especially those on the brink of foreclosure.

The agreement is backed by a federal court order to ensure that servicers comply with the terms of the settlement. In Washington state, thousands of homeowners will potentially receive loan modifications or principal reductions and thousands who already lost their homes will receive one time payments.

WHERE THE MONEY GOES

Approximately $483 million for programs to help borrowers
The banks will spend $17 billion – up to about $483 million for Washington state – on a variety of programs to help beleaguered borrowers. The participating banks will receive credit toward the $25 billion settlement for relief programs they implement to benefit homeowners. The centerpiece programs involve loan modifications and principal reductions for qualifying delinquent borrowers. These programs will help those who cannot afford their current payment but have a reasonable chance of succeeding with a reduction in the amount they owe.

The settlement provides powerful financial incentives for the banks to provide loan modifications as quickly as possible—starting immediately. Mortgage servicers have three years to reach loan modification targets and fulfill refinancing commitments.  Servicers must reach 75 percent of their targets within the first two years or pay substantial cash penalties.

The settlement also lends a hand to those borrowers whose homes can’t be saved: it encourages short sales by cushioning the impact of such transactions and providing a dignified way out. Some borrowers will receive money to help them relocate to an affordable home. Others will be forgiven the difference between what they owe and the short-sale price of their home. The settlement includes special assistance for members of the military facing foreclosure.

Because of the way this part of the settlement is structured—banks in some cases will receive less than a dollar credit for each dollar of loan modifications they provide—the total value to consumers is much greater than the $25 billion settlement value.

“This settlement responds to the concerns of homeowners who did everything right — borrowed what they could afford and paid their mortgages on time — but because real estate values collapsed, they’re underwater, have not been able to refinance at today’s low rates,” McKenna said. “We fought hard to make sure that many of these borrowers will benefit from the settlement.”

$24 million in payments to foreclosure victims
Borrowers who were not properly offered loss mitigation or who were otherwise improperly foreclosed on will be eligible for a uniform payment of approximately $2,000. These payments will be paid to borrowers who were foreclosed on between Jan. 1, 2008 through Dec. 31, 2011.  Qualifying borrowers will be notified of their right to file a claim and are not required to release any liability in exchange for a payment. Those who believe they were harmed beyond the scope of the settlement may still seek an independent foreclosure review from the U.S. Office of the Comptroller of the Currency or may pursue an individual or class action lawsuit.

$45 million for foreclosure relief programs
The state will receive a nearly $57 million cash payment: approximately $10 million for civil penalties and attorney general’s office fees, $1 million for DFI and the remaining $45 million for foreclosure relief and housing programs. The Attorney General’s Office has used funds from previous mortgage settlements to fund foreclosure prevention hotlines, free legal assistance and foreclosure mediation services. McKenna proposes a committee made up of state legislators from both parties, a representative from the Department of Financial Institutions (DFI) and housing industry and consumer advocate groups to decide the best way to distribute the funds.

NEW MORTGAGE LOAN SERVICING AND FORECLOSURE STANDARDS
The settlement includes unprecedented reforms of servicing and foreclosure standards.  Servicers agree to make big changes in how they deal with borrowers and handle foreclosures.

With the backing of a federal court order and the oversight of an independent monitor, the agreement creates dozens of new consumer protections, making the loan servicing process more transparent.  Protections include requiring a single point of contact for borrowers, establishing case review and paperwork processing requirements and timelines, and eliminating practices such as “dual tracking,” when banks simultaneously pursue a loan modification and a foreclosure.

“A recurring theme in complaints to our office involves borrowers whose homes were foreclosed just as they were working out new loan terms,” said Assistant Attorney General David Huey, who has spent the last few years working exclusively on mortgage lending issues. “Our goal for this part of the landmark settlement, which applies to every borrower, is to put an end to this disturbing practice.”

WHAT THE SETTLEMENT DOESN’T DO
States and federal agencies signing onto the agreement agree to release the servicers from servicing, foreclosure and origination liability claims. The settlement does not grant any immunity for the banks from criminal prosecution, nor does it affect criminal prosecutions in any way. The settlement does not include any securitization claims, some of which are being pursued by other states. This agreement does not prevent homeowners or investors from pursuing individual, institutional or class action civil cases against the servicers.

WHICH MORTGAGES ARE NOT COVERED BY THE SETTLEMENT
Not all borrowers will qualify for the lower monthly payments provided by the settlement. The settlement impacts loans held by the banks – about 20 percent of the U.S. mortgage market.

The settlement does not affect loans controlled by the Federal Housing Finance Agency, including loans backed by Fannie Mae and Freddie Mac -- an estimated 60 percent of the mortgage market. Fannie and Freddie already provide for loan modifications under the Home Affordable Refinance program, which borrowers may learn more about at http://www.makinghomeaffordable.gov/get-assistance/loan-look-up/Pages/default.aspx.

Mortgage-backed securities held by investors, 20 percent of the mortgage market, are mostly not covered by the settlement’s financial provisions. Such loans are often serviced by the companies involved in today’s settlement, even though the loans are owned by others.

WHERE TO GO FOR HELP
Because of the complexity of the mortgage market and this agreement, which will be performed over a three-year period, borrowers will not immediately know if they are eligible for relief.

For loan modifications and refinance options, borrowers may be contacted directly by one of the five participating mortgage servicers. Consumers may also contact the banks directly for additional information:

For payments to foreclosure victims, a settlement administrator designated by the attorneys general will send claim forms to eligible persons.  Even if you are not contacted, if your loan is serviced by one of the five settling banks, you may contact your servicer at the numbers above to see if you are eligible.

If you believe you are eligible for relief under this settlement but are concerned you will be difficult to locate, please contact our office. We will collect and forward your information to the appropriate person to ensure you are contacted if you are eligible.

BACKGROUND
In fall 2010, loan servicers acknowledged that they had been processing home foreclosures without obtaining documents that established the origin of the loans. State and federal enforcement agencies moved into place to help stop improper foreclosure practices, compel the companies to establish more effective monitoring and ultimately determine appropriate remedies for homeowners affected by the abusive practices.

Washington and seven other states – Iowa, Illinois, Florida, Texas, Colorado, Connecticut and North Carolina – were selected to serve on the negotiating team that spearheaded the investigation and settlement negotiations on behalf of states and banking regulators including the Washington Department of Financial Institutions. Both California and New York were original members of the team but withdrew.

Additionally, the Washington Attorney General’s Consumer Protection Division has been conducting its own investigation since May 2010 into reports of lenders and trustee services not properly reviewing foreclosure documents or following other legal procedures. In so-called “non-judicial foreclosure” states like Washington, a lender can proceed directly to selling a home at public auction without first filing a lawsuit. Foreclosure proceedings are generally undertaken by a third party trustee and not directly by the lender.

McKenna sent letters in October 2010 and April 2011, outlining concerns and calling on trustees to suspend questionable foreclosures in the state. In August 2011, he announced a lawsuit against ReconTrust Company, a subsidiary of Bank of America, for conducting illegal foreclosures on thousands of Washington homeowners. The office is investigating more than a dozen other trustees for suspected violations.

Under Attorney General McKenna, the Attorney General’s Office helped negotiate billions in settlements with banks involved in mortgage lending, including Wells Fargo/Wachovia/Golden West/World Savings Bank, Bank of America/Countrywide, Ameriquest, and Household Financial. McKenna’s Consumer Protection Division has also brought civil suits against several businesses and individuals that promised to help save homes from foreclosure (for a fee) but then failed to do so.