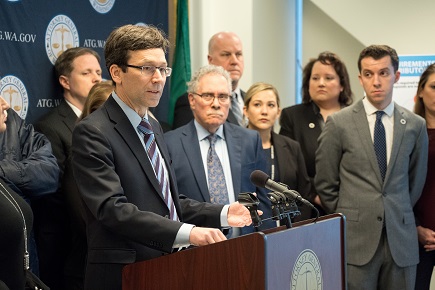 On Oct. 3, 2022, Attorney General Bob Ferguson announced that Washington state will receive the maximum $518 million under a resolution with three companies found to have played key roles in fueling the opioid epidemic. All 125 eligible local governments signed onto the half-billion dollar opioid resolution stemming from Ferguson’s lawsuit.

The completion of the resolution ends Ferguson’s lawsuit. The first payments will begin flowing to Washington communities Dec. 1.

After a 6-month trial at the close of the evidence, the State of Washington reached a settlement with McKesson Corp., Cardinal Health Inc., and AmerisourceBergen Drug Corp. for up to $518 million. More than $476 million will be directed toward addressing the opioid epidemic. This money will be paid over 17 years.

Washington cities and counties with population over 10,000 were eligible to join this settlement.

The State will receive approximately $261 million to be spent throughout the State on combatting the opioid epidemic. The State’s Opioid Response Plan can be found under Resources.

A city or county that receives a share as well as the State must spend the settlement money on approved uses, must keep records of its spending, must file reports with the Settlement Administrator, and must comply with all terms of the Washington and National Distributor Settlements. A local government can either spend the money itself or elect to pool its money with other local governments on a regional basis.

The deadline for cities and counties to join the settlement was September 30, 2022.  Had an insufficient number of jurisdictions joined, the settlement would have been void. More information on how to join and other requirements can be found listed below and under Resources.

Signature pages from the Participation Form, Allocation Agreement, and One Washington Memorandum should be returned to comopioidscases@atg.wa.gov.

Two things needed to happen for this settlement to be finalized:

The Participation Form requires the local governments to abide by the terms of the Washington and National Distributor Settlements. This is the only document required for the Washington settlement to be finalized.