SEATTLE — Six months after taking the three largest distributors of prescription opioids to trial, Attorney General Bob Ferguson announced a resolution-in-principle that will deliver approximately a half-billion dollars to Washington to combat the opioid epidemic.

As a result of today’s announced resolution, these three opioid distributors will pay a total of $518 million. More than $476 million will be directed toward addressing the opioid epidemic.

Ferguson rejected a national settlement between the three opioid distributors in order to take these entities to trial. Ferguson’s decision will result in Washington receiving $46 million in additional resources from the distributors to provide substance abuse treatment and support other strategies to address the opioid crisis, including housing and other wrap-around services.

“We could have joined the overwhelming majority of states and settled with the the largest opioid distributors, but we chose to fight them in court instead,” Ferguson said. “That decision to take them to court will result in significant additional resources for Washington to combat the opioid epidemic. These resources will increase prevention efforts and help Washingtonians in need, including providing necessary wrap-around services for those experiencing homelessness as a result of their substance abuse disorder. This is a historic resolution — one of the largest in state history. We forced these companies to stand trial for their conduct. Washingtonians will receive approximately one half billion dollars to combat the opioid epidemic — including $46 million more than Washington would have received if we had accepted the national settlement last year.”

This is part of a wider effort by Ferguson to combat the opioid epidemic and recover resources to address the ongoing crisis.

It is the second time Ferguson’s rejection of a national settlement led to a better deal for Washingtonians. In March, Ferguson announced that Washington will receive $183 million to address the opioid crisis as a result of his office successfully leading the challenge to the Purdue bankruptcy plan — $113 million more than Washington would have received under the original deal.

As part of his strategy of rejecting national settlements and choosing to litigate, Ferguson also declined to settle with Johnson & Johnson last year.  The Washington Attorney General’s Office has a trial scheduled against opioid manufacturer Johnson & Johnson in September. Ferguson’s legal team is conducting multiple ongoing investigations into conduct by other entities that helped fuel the epidemic.

In recent years, the Washington Attorney General’s Office has recovered a total of $714.5 million from opioid litigation. This total includes $183 million in recoveries from Purdue Pharma and $13.5 million from McKinsey to address harms from the opioid crisis. 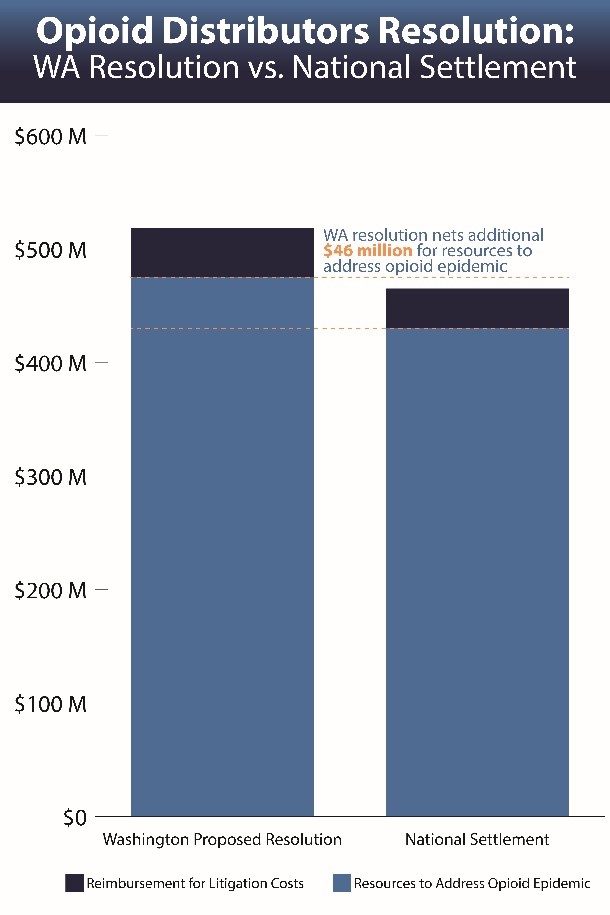 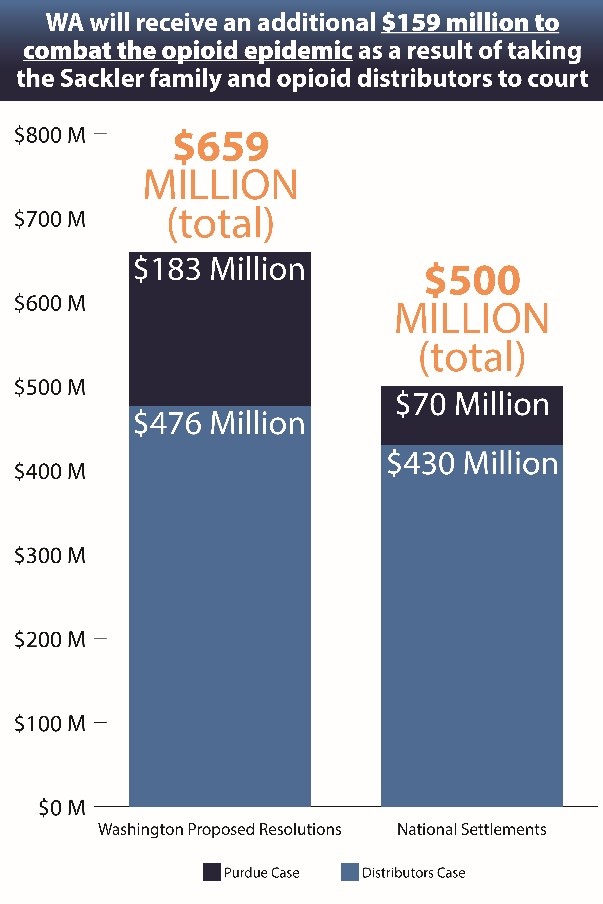 Today’s announced resolution is not final until all litigating Washington jurisdictions and at least 90% of non-litigating jurisdictions with populations over 10,000 agree to its terms, and the King County Superior Court judge approves. This is similar to the structure of the national resolution.

If approved, Washington state will receive $518 million. These resources will be paid out over a period of 17 years. This is the same time period for payment as the national settlement that virtually every attorney general agreed to earlier this year.

Ferguson’s lawsuit against McKesson, Cardinal Health and AmerisourceBergen asserted that the three Fortune 15 companies made billions of dollars feeding the opioid epidemic, shipping huge amounts of oxycodone, fentanyl, hydrocodone and other prescription opioids into the state even when they knew or should have known those drugs were likely to end up in the hands of drug dealers and those suffering from substance use disorder.

Opioid distributors are legally required to monitor the size and frequency of prescription opioid orders to identify suspicious orders that could be diverted into the illegal drug market. Distributors are required to stop these suspicious shipments and report them to the federal Drug Enforcement Agency (DEA).

Instead, McKesson, Cardinal Health and AmerisourceBergen faced repeated actions from the DEA for continuously failing to stop and report suspicious opioid shipments, paying hundreds of millions in fines for their failure to follow the rules.

Prescriptions and sales of opioids in Washington skyrocketed more than 500% between 1997 and 2011. In 2011, at the peak of overall sales in Washington, more than 112 million daily doses of all prescription opioids were dispensed in the state — enough for a 16-day supply for every woman, man and child in Washington.

In 2015, there were eight counties with more prescriptions than population, led by Asotin, with nearly 1 ½ prescriptions per person. The other counties were Clallam, Grays Harbor, Columbia, Garfield, Pend Oreille, Lewis and Benton.

Ferguson asserted that McKesson, Cardinal Health and AmerisourceBergen violated the law by filling thousands of suspicious orders in Washington state without adequately identifying them or reporting them.