SEATTLE — Attorney General Bob Ferguson filed a lawsuit today against the three largest distributors of prescription opioids in Washington state, arguing that they failed to alert law enforcement of suspicious opioid orders, and illegally shipped those orders into Washington for years, and contributed to the illegal supply of opioids, fueling the state’s opioid epidemic.

Ferguson’s lawsuit, filed today in King County Superior Court, asserts that McKesson Corp., Cardinal Health Inc. and AmerisourceBergen Drug Corp. made billions of dollars feeding the opioid epidemic, shipping huge amounts of oxycodone, fentanyl, hydrocodone and other prescription opioids into the state even when they knew or should have known those drugs were likely to end up in the hands of drug dealers and addicts. 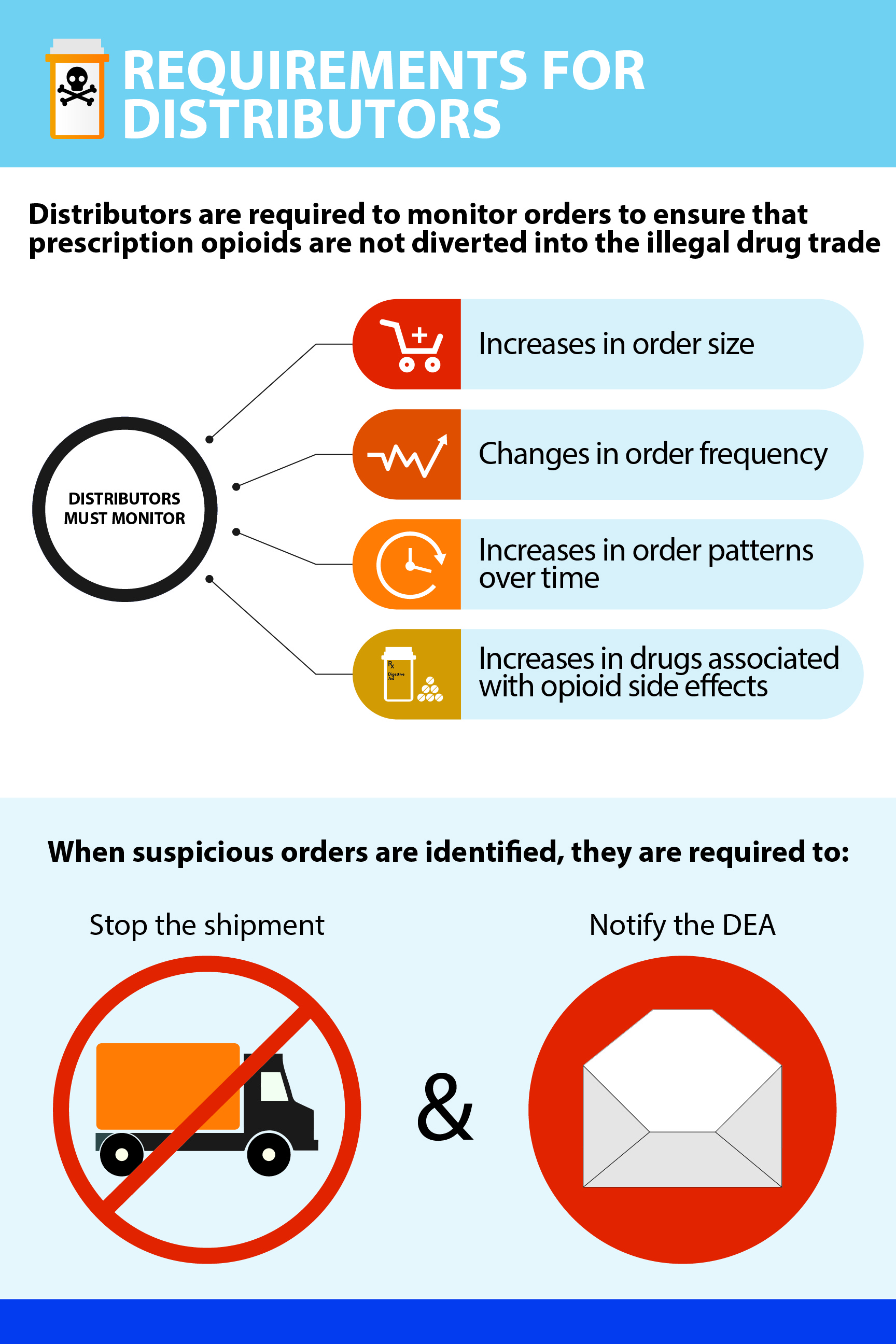 Opioid distributors are legally required to monitor the size and frequency of prescription opioid orders to identify suspicious orders that could be diverted into the illegal drug market. Distributors are required to stop these suspicious shipments and report them to the federal Drug Enforcement Agency (DEA).

Instead, McKesson, Cardinal Health and AmerisourceBergen have faced repeated actions from the DEA for continuously failing to stop and report suspicious opioid shipments, paying hundreds of millions in fines for their failure to follow the rules.

“We are woefully under-resourced when it comes to treatment. The people who are responsible for this epidemic should being paying for it,” Ferguson said. “We are going to hold these companies accountable and get more money into our communities for treatment.”

McKesson, Cardinal Health and AmerisourceBergen supply the majority of opioids coming into Washington state. They are listed in the top 15 of the Fortune 500 list based on 2017 revenue.

Between 2006 and 2014, these three companies supplied more than 2 billion opioid pills to Washington.

In 2014, for example, McKesson, Cardinal Health and AmerisourceBergen shipped enough opioids to Pend Orielle County to supply every single resident with dozens of pills. In 2009, McKesson alone supplied enough for dozens of pills for every resident of the county. The specific shipment numbers are currently under seal.

The DEA requires distributors to monitor orders, looking for specific factors that can identify suspicious shipments. Those factors include increases in quantity and frequency, as well as changes in ordering patterns.

McKesson, Cardinal Health and AmerisourceBergen have faced multiple actions by the DEA and others for failing to monitor and stop suspicious orders. McKesson has faced more than $160 million in fines, with the DEA determining that the company filled “hundreds of suspicious orders placed by pharmacies participating in illicit internet schemes, but failed to report the orders to DEA.”

Cardinal has been fined five times for a total of nearly $100 million since 2008, while DEA suspended AmerisourceBergen’s distributor licenses in 2007 for failing to adequately monitor and report suspicious orders.

The DEA noted that, between June 2008 and May 2013, one McKesson distribution facility “processed more than 1.6 million orders for controlled substances . . . , but reported just 16 orders as suspicious.”

Prescriptions and sales of opioids in Washington skyrocketed more than 500 percent between 1997 and 2011. In 2011, at the peak of overall sales in Washington, more than 112 million daily doses of all prescription opioids were dispensed in the state — enough for a 16-day supply for every woman, man and child in Washington. 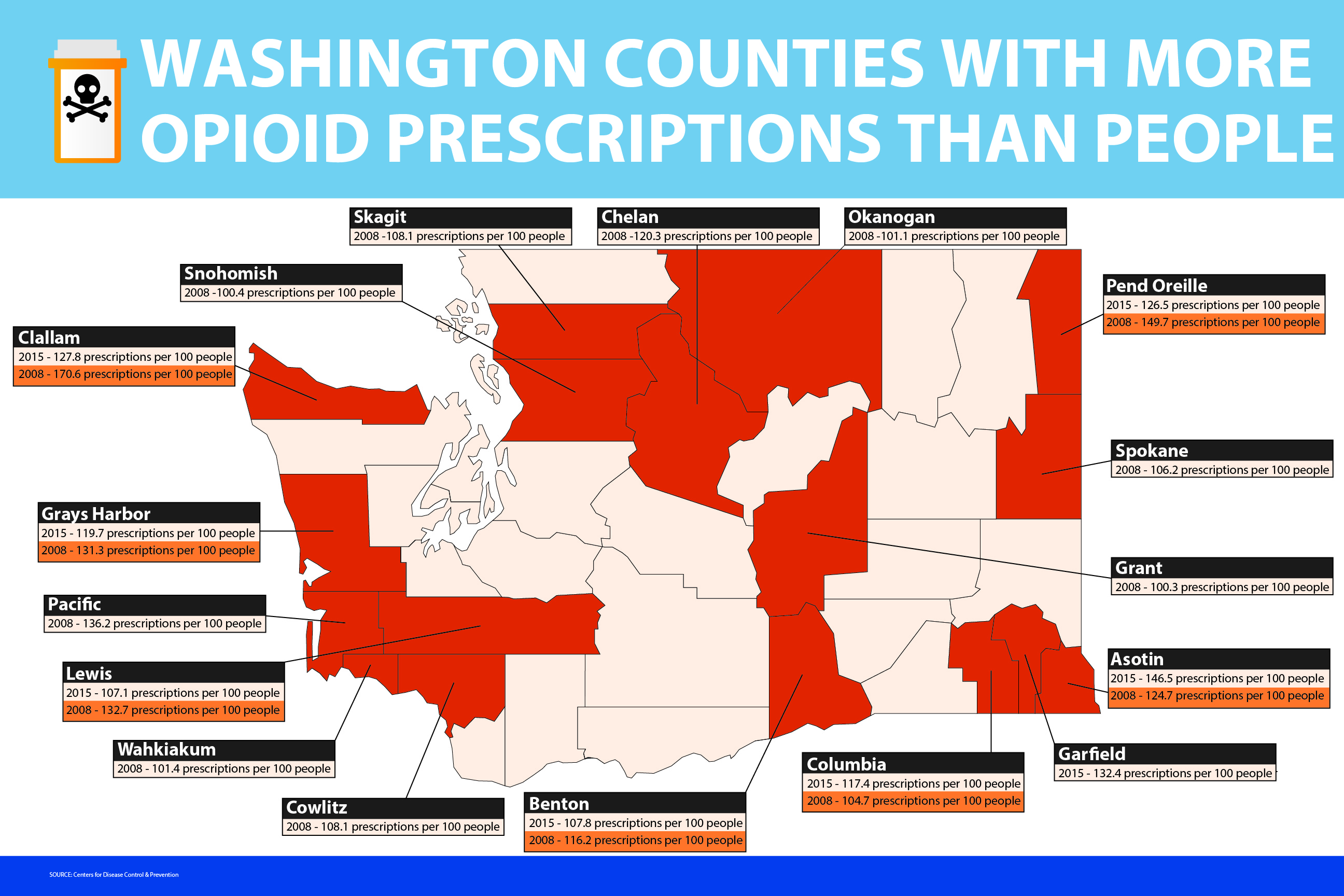 In 2015, there were eight counties with more prescriptions than population, led by Asotin, with nearly 1 ½ prescriptions per person. The other counties were Clallam, Grays Harbor, Columbia, Garfield, Pend Orielle, Lewis and Benton.

Between 2006 and 2017, opioid overdoses killed more than 8,000 Washingtonians, more than were killed by car accidents or firearms. The majority of drug overdose deaths in Washington state involve opioids.

The epidemic has strained Washington’s health care system. Between 2009 and 2014, the rate of opioid-related hospital and clinic stays increased by more than 60 percent in Washington state.

Opioids are also devastating families. A 2018 internal survey of Washington state Assistant Attorneys General handling child abuse and neglect cases revealed that nearly half of their child dependency cases and about 40 percent of parental rights termination cases are impacted by opioids.

Ferguson accuses McKesson, Cardinal Health and AmerisourceBergen of violating the state Consumer Protection Act for filling thousands of suspicious orders in Washington state without adequately identifying them or reporting them. Their actions, Ferguson asserts, helped fuel the opioid epidemic in Washington state.

Ferguson’s lawsuit seeks civil penalties and damages from the companies. He also asks the court to order the distributors to give up the profits they made in Washington as a result of their illegal conduct. Sales of opioids are worth billions every year nationwide, and Washington’s portion is expected to be in the millions.

The surrendered profits will be used to remediate the effects of the opioid epidemic, possibly funding treatment, education and more.

In September of 2017, Ferguson sued one of the nation’s largest opioid manufacturers, Purdue Pharma. Ferguson accuses the OxyContin maker of fueling the state’s opioid epidemic by embarking on a massive deceptive marketing campaign and convincing doctors and the public that their drugs are effective for treating chronic pain and have a low risk of addiction, contrary to overwhelming evidence. In April of 2018, a King County judge denied Purdue’s attempt to dismiss Ferguson’s lawsuit.

In the summer of 2017, the Attorney General’s Office hosted a summit on Washington’s opioid epidemic in partnership with the Washington State Patrol and the Washington Association of Prosecuting Attorneys. A report developed by the organizations after the summit included a range of recommendations, several of which became the subject of Attorney General Request legislation in the 2018 legislative session. Those proposals included limits on new opioid prescriptions, which failed to pass the legislature. However, over the last year, state medical boards have implemented new opioid prescription limits in Washington state.