As a result of AG Ferguson’s challenge to Sacklers, Purdue settlement, Washington will receive an additional $113 million to address the opioid crisis

OLYMPIA — Attorney General Bob Ferguson announced today that Washington will receive an additional $113 million from Purdue Pharma and the Sackler family as a result of Ferguson leading a challenge to the Oxycontin maker’s bankruptcy plan.

By challenging the original bankruptcy plan, Ferguson and eight other attorneys general won an additional $1.175 billion from the Sacklers to help states, cities and tribes address the harms of the opioid epidemic. Washington’s share will more than double as a result of Ferguson challenging to the bankruptcy plan —from $70 million under the original plan to $183 million. This money must be used to tackle the opioid crisis and help Washington’s recovery, a requirement that Ferguson has always insisted upon.

“Rather than join the majority of states in settlement, Washington chose to lead the fight against the Sacklers and Purdue,” Ferguson said. “As a result, we won more than $100 million for Washington state to address the opioid epidemic, and more than $1 billion for states, cities and tribes across the country. We stood up to the Sacklers and forced them to relinquish more of their fortune to help undo the damage they caused.”

The proposed resolution must still be approved by the bankruptcy court. In addition, Purdue and the Sacklers have appealed the District Court’s ruling vacating the original bankruptcy plan. As part of the new proposal, Washington and the eight other attorneys general will drop their opposition to the appeal pending approval of this settlement. The federal government and other parties involved in the appeal may or may not choose to continue the case.

If the appeal goes forward, the proposed settlement is contingent on the bankruptcy plan being approved. If the bankruptcy plan is not upheld, the proposed deal is void, and Ferguson will continue fighting in court to hold the Sacklers and Purdue accountability for illegally fueling the opioid epidemic. Washington was preparing for trial against Purdue Pharma when it declared bankruptcy.

As a result of this settlement, Washington will now receive a total of $183 million from Purdue and Sacklers to address the harms of the crisis — a significant increase from the original settlement that Ferguson rejected 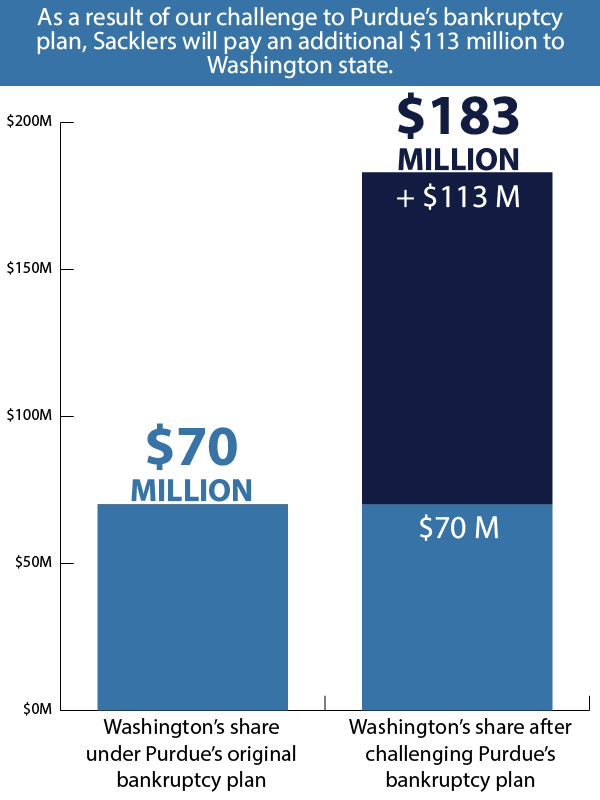 Under the terms of the settlement, the Sacklers and Purdue will make the final payment in 2039.

Washington is one of 48 states that sued Purdue Pharma, the maker of OxyContin, for fueling the opioid epidemic. Washington’s lawsuit asserts Purdue embarked on a massive deceptive marketing campaign to convince doctors and the public that OxyContin is effective for treating chronic pain and has a low risk of addiction, all without evidence to support its claims. This deceptive marketing resulted in the deaths of Washingtonians and devastation to Washington families.

The lawsuit contends Purdue conducted an uncontrolled experiment on the American public without any reliable clinical evidence that opioids are effective at treating chronic pain. To doctors and patients, Purdue consistently downplayed the risks of addiction from long-term use and deceptively represented opioids as safe for treating long-term chronic pain.

Facing thousands of lawsuits from across the country, Purdue Pharma declared bankruptcy.

An audit of Purdue introduced during the bankruptcy proceedings in late 2019 showed that the Sackler family pulled nearly $11 billion out of Purdue since 2008.

Purdue’s bankruptcy plan, approved Sept. 1, 2021, by U.S. Bankruptcy Judge Robert Drain, requires the Sackler family to pay $4.3 billion over nine years to the group of states, municipalities and private plaintiffs, including Washington, that sued or have claims against the company.

Ferguson announced the appeal in September, along with the eight other attorneys general, asserting that the plan was inadequate, and did not provide sufficient accountability.

For the last several years, the Attorney General’s Office has taken on complex cases to hold major corporations accountable for their role in the opioid crisis.

Washington is currently in trial in King County Superior Court against the three largest distributors of opioids — McKesson Corp., Cardinal Health Inc. and AmerisourceBergen Drug Corp. Ferguson’s lawsuit, filed in 2019, asserts the corporations made billions of dollars feeding the opioid epidemic by shipping huge amounts of oxycodone, fentanyl, hydrocodone and other prescription opioids into the state even when they knew or should have known those drugs were likely to end up in the hands of drug dealers and addicts.

Last year, a multinational consulting firm that worked with Purdue was legally required to pay $13.4 million to the Attorney General’s Office. The consulting firm, McKinsey, discussed ways for Purdue to “turbocharge” sales of OxyContin.

In January 2020, Ferguson filed a lawsuit against Johnson & Johnson, one of the largest suppliers of the raw materials used to produce opioid pain medications, accusing the multinational company of playing a key role in driving the entire pharmaceutical industry to vastly expand the use of prescription opioids. That case is set for trial later this year.

In the summer of 2017, the Attorney General’s Office hosted a summit on Washington’s opioid epidemic in partnership with the Washington State Patrol and the Washington Association of Prosecuting Attorneys. A report developed by the organizations after the summit included a range of recommendations, several of which became the subject of Attorney General request legislation in the 2018 legislative session. Those proposals included limits on new opioid prescriptions. The following year, state medical boards implemented new opioid prescription limits in Washington state similar to those requested by Ferguson.