OLYMPIA — Attorney General Bob Ferguson today filed a lawsuit against Johnson & Johnson, one of the largest suppliers of the raw materials used to produce opioid pain medications, accusing the multinational 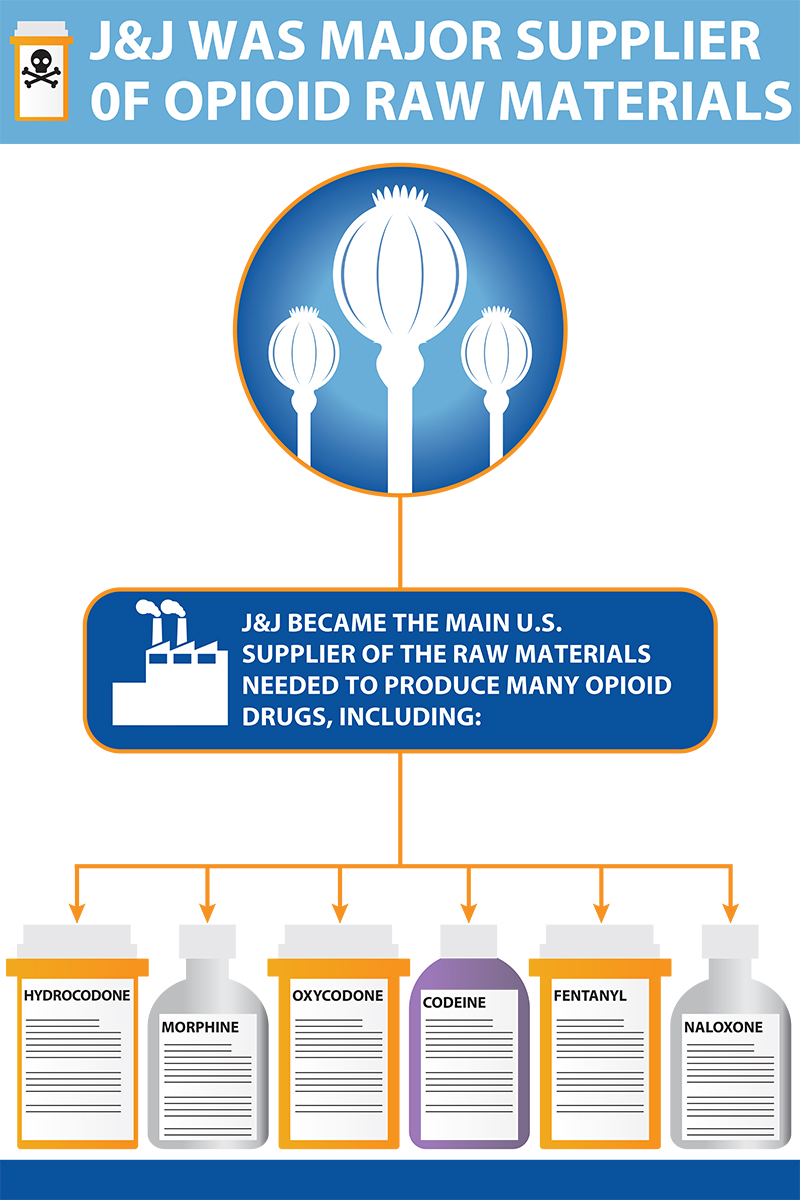 company of playing a key role in driving the entire pharmaceutical industry to vastly expand the use of prescription opioids.

Ferguson also asserts that Johnson & Johnson, along with several of its subsidiaries, fueled the opioid epidemic in Washington state by embarking on a massive deceptive marketing campaign and convincing doctors and the public that their drugs are effective for treating chronic pain and have a low risk of addiction, contrary to overwhelming evidence.

Johnson & Johnson’s actions resulted in the deaths of Washingtonians and devastation to Washington families.

The lawsuit, filed today in King County Superior Court, asserts that Johnson & Johnson deceptively marketed the long-term use of opioids at high doses without documented evidence of their effectiveness, ignoring the well-documented risks of its drugs.

Today’s lawsuit continues Ferguson’s work combating the opioid epidemic. In 2017, Ferguson filed a lawsuit against Purdue Pharma. In March 2019, he filed suit against the three largest distributors of prescription opioids in Washington state, with a trial scheduled in October.

“Opioids have torn apart Washington families, overburdened our health care system and caused an epidemic of addiction we are struggling to contain,” Ferguson said. “Johnson & Johnson must be held responsible for the damage it caused.”

A top supplier of raw ingredients

Johnson & Johnson played a unique role in proliferating opioids in the United States.

From the 1990’s until at least 2016, Johnson & Johnson, through its subsidiaries, cultivated and processed opium poppy plants and used their raw narcotic materials to manufacture the active ingredients necessary to produce opioid drugs.

In addition to using the processed active ingredients to produce its own opioids, Johnson & Johnson sold them to other major opioid manufacturers for use in making their own opioid drugs. Those companies include Purdue Pharma and Teva, among others.

The ingredients were used to make oxycodone, hydrocodone, fentanyl, naloxone and more.

By 2015, Johnson & Johnson was the top United States supplier of the active pharmaceutical ingredients used to make opioid drugs.

False claims of safety, effectiveness of long-term use 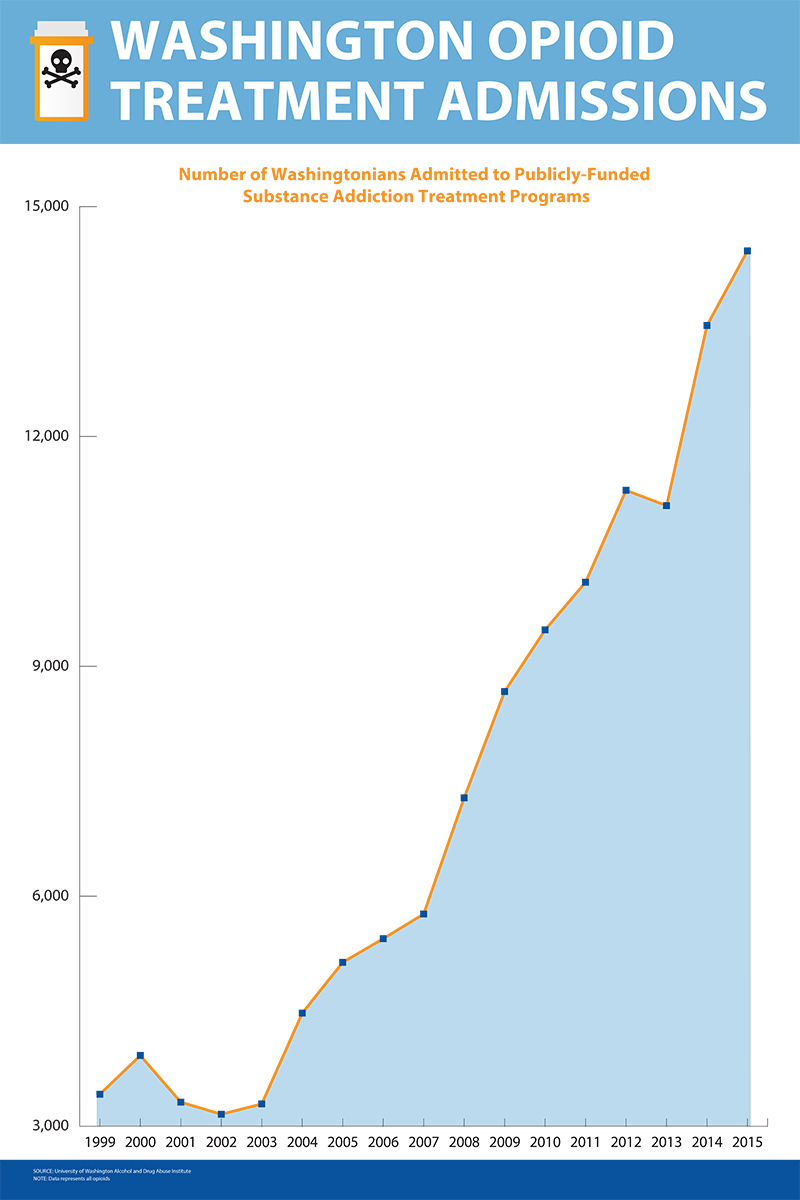 opioid drugs for chronic pain conditions like headaches, low back pain and fibromyalgia, despite evidence that opioids were not effective at treating these conditions.

In addition to sales representatives making direct contact with health care providers, Johnson & Johnson used both branded marketing and non-branded sources through third-party organizations funded by the company to forward its narrative, like the American Pain Foundation and the American Academy of Pain Management, among others. These efforts included articles in medical journals and publications funded by Johnson & Johnson, materials from professional societies and advocacy groups, and continuing medical education, dinners, seminars, symposiums and conferences paid for by Johnson & Johnson and others.

The third-party groups also funded lobbying efforts to oppose state-level regulation of opioids, including in Washington. For example, the American Pain Foundation provided support to the Washington Pain Alliance to oppose opioid prescription standards in Washington.

Despite Johnson & Johnson’s efforts, the Centers for Disease Control & Prevention (CDC) 2016 Guideline for Prescribing Opioids for Chronic Pain determined that no study exists to show opioids are effective for long-term pain treatment.

The CDC found “extensive evidence” that those who use opioids for more than three months are at a substantially increased risk of opioid use disorder.

Other, safer options — like acetaminophen or non-steroidal anti-inflammatory drugs (NSAIDs), such as ibuprofen — are effective and carry fewer risks, the CDC added.

Johnson & Johnson also used both branded and unbranded marketing to mislead health care providers and patients about the risks of addiction to opioids.

For example, Johnson & Johnson marketed its Nucynta opioid as “less addictive” than other opioid pain medications. And, sales representatives were trained to market the drug as a “milder opioid,” when, just like other opioid medications, the FDA-approved label for Nucynta states the drug has “a high potential for abuse.”

When signs of addiction appeared in patients, Johnson & Johnson persuaded doctors that what appeared to be addiction was actually under-treatment of their pain, and to respond by increasing opioid dosages.

The concept, called “pseudoaddiction,” was coined by Dr. J. David Haddox, who later became an executive at Purdue. His theory was based on the case of a single cancer patient. No study has validated the theory of “pseudoaddiction.”

Despite a lack of evidence for pseudoaddiction, Johnson & Johnson pushed this theory to convince doctors to give more drugs to patients who displayed signs of addiction, claiming that the solution to pseudoaddiction was “to prescribe more opioids.”

However, a doctor and chronic pain researcher affiliated with Johnson & Johnson, Dr. Lynn Webster, admitted in 2012 that pseudoaddiction “became too much of an excuse to give patients more medication. It led us down a path that caused harm.”

Prescriptions and sales of opioids in Washington skyrocketed more than 500 percent between 1997 and 2011. In 2011, at the peak of overall sales in Washington, more than 112 million daily doses of all 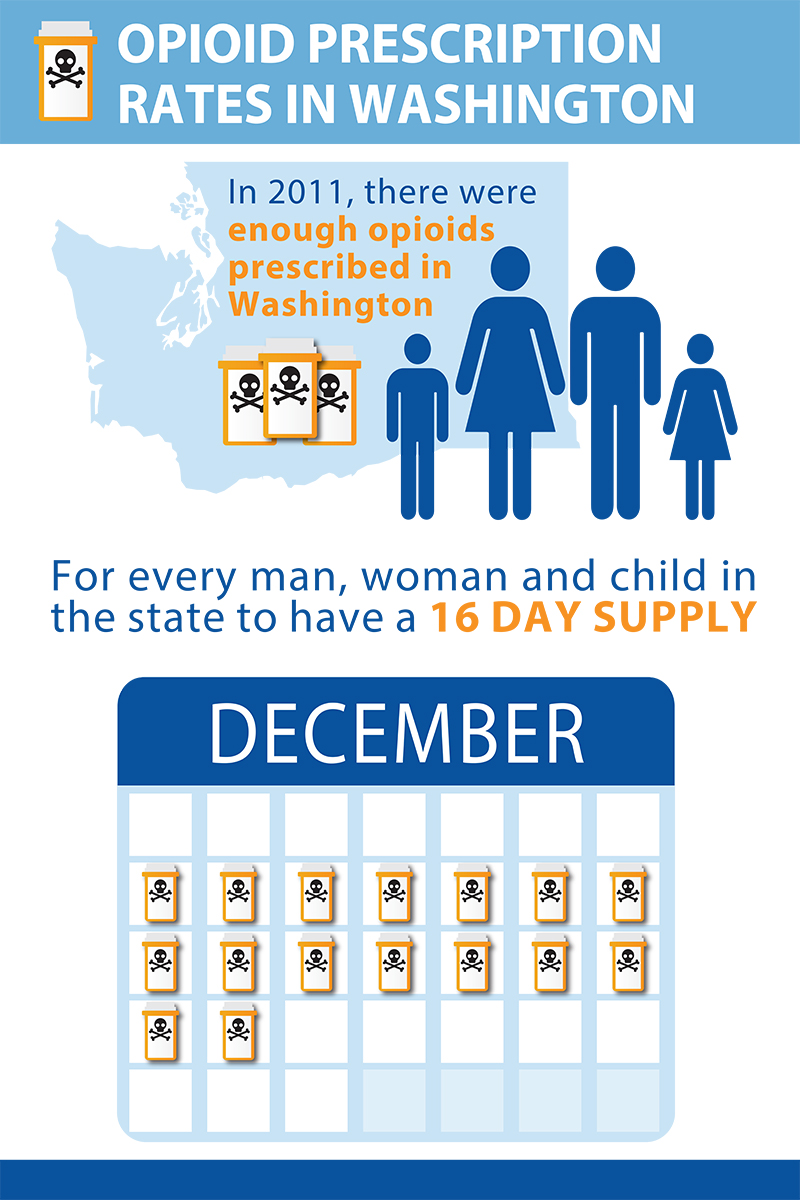 prescription opioids were dispensed in the state — enough for a 16-day supply for every woman, man and child in Washington.

In 2015, there were eight counties with more prescriptions than population, led by Asotin, with nearly 1 ½ prescriptions per person. The other counties were Clallam, Grays Harbor, Columbia, Garfield, Pend Orielle, Lewis and Benton.

Between 2006 and 2017, opioid overdoses killed more than 8,000 Washingtonians, more than were killed by car accidents or firearms. The majority of drug overdose deaths in Washington state involve opioids.

The epidemic has strained Washington’s health care system. Between 2009 and 2014, the rate of opioid-related hospital and clinic stays increased by more than 60 percent in Washington state.

Ferguson’s lawsuit seeks civil penalties and damages. Ferguson also asks the court to order Johnson & Johnson to give up the profits it made in Washington as a result of its illegal conduct. It is believed that Johnson & Johnson has made billions of dollars selling its opioids and raw materials to other companies. Washington’s portion is expected to be in the millions.

In November, an Oklahoma judge ordered Johnson & Johnson to pay that state $465 million for its role in fueling Oklahoma’s opioid epidemic.

The surrendered profits will be used to remediate the effects of Johnson & Johnson’s misrepresentations of opioids, possibly funding treatment, education and more.

Johnson & Johnson, and its subsidiaries, have been the subject of several major Washington state consumer protection actions since 2017, paying Washington more than $14 million. Nearly $10 million of those funds are being used to assist Washington women harmed by pelvic mesh implants manufactured by Johnson & Johnson.

The company also paid Washington state $3.6 million in January of 2019 over defective hip implants, and about $700,000 in 2017 to resolve allegations that a subsidiary sold over the counter medicines that did not meet federal quality standards.

Johnson & Johnson is the second manufacturer of opioids Ferguson has sued in the last two years. In 2017, Ferguson filed a lawsuit against OxyContin maker Purdue Pharma, a case that is still ongoing.

Ferguson also sued the three largest distributors of opioids — McKesson Corp., Cardinal Health Inc. and AmerisourceBergen Drug Corp. — earlier this year, asserting they made billions of dollars feeding the opioid epidemic by shipping huge amounts of oxycodone, fentanyl, hydrocodone and other prescription opioids into the state even when they knew or should have known those drugs were likely to end up in the hands of drug dealers and addicts.

In the summer of 2017, the Attorney General’s Office hosted a summit on Washington’s opioid epidemic in partnership with the Washington State Patrol and the Washington Association of Prosecuting Attorneys. A report developed by the organizations after the summit included a range of recommendations, several of which became the subject of Attorney General request legislation in the 2018 legislative session. Those proposals included limits on new opioid prescriptions, which failed to pass the legislature. However, in the first half of 2019, state medical boards have implemented new opioid prescription limits in Washington state similar to those requested by Ferguson.