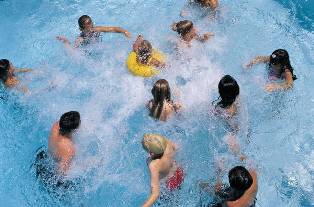 In February, the Yakima Herald reported an ominous development at a protest against the rumored closure of a local swimming pool: The police chief spotted a repeat sex offender among the demonstrators. It turns out that the offender, who has a history of mental illness, was regularly visiting the oasis.  Obviously, high-risk sex offenders and public swimming pools – where children tend to gather – don’t mix. City officials took immediate action:

Citing a 2006 law designed for this very scenario, city officials subsequently served the man with a trespass notice, barring him from returning unless he could obtain a court order on appeal. A violation is a Class C felony, punishable by up to five years in prison.

We’re proud to say that the law employed by the City of Yakima was drafted by the Attorney General’s Office.  In 2006, the Legislature passed the Attorney General-requested legislation to establish the crime of Criminal Trespass Against a Child. It is the first law in the nation that gives employees at facilities where children play the authority to order out registered sex offenders whose victims included children. Offenders who refuse to obey such orders can be charged with a Class C felony punishable by a maximum one year in prison.

Sex predators are called predators for a reason. This unique law provides facility managers a much-needed tool to protect children from predators who intentionally target community centers, swimming pools, parks, and playgrounds in search of new victims. We’re happy to see the law used in Yakima.

The ban applies only to Level 2 or Level 3 sex offenders whose crimes involved children. Contrary to public perceptions, many such offenders are not permanently barred from being around children…Interim police Chief Greg Copeland told the council there are about 50 sex offenders residing within city limits and another 50 in the Upper Valley who qualify for the ban, meaning their victims were children.

Learn more about Attorney General’s McKenna’s work to protect the public from sexual predators on our community safety pages.