Welcome to the December issue of the Ferguson File! It has been a busy few months, and I want to share with you the latest news from our office.

For a quick update on what our office has been up to, check out this recent interview with CR Douglas from Q-13. In addition to talking about the issues, we discussed how chess prepared me for my role as your attorney general—and we even played a game while we chatted!

Veterans Day may come just once a year but here at the Attorney General’s Office (AGO), we have been working to honor veterans and military families since I became your AG. 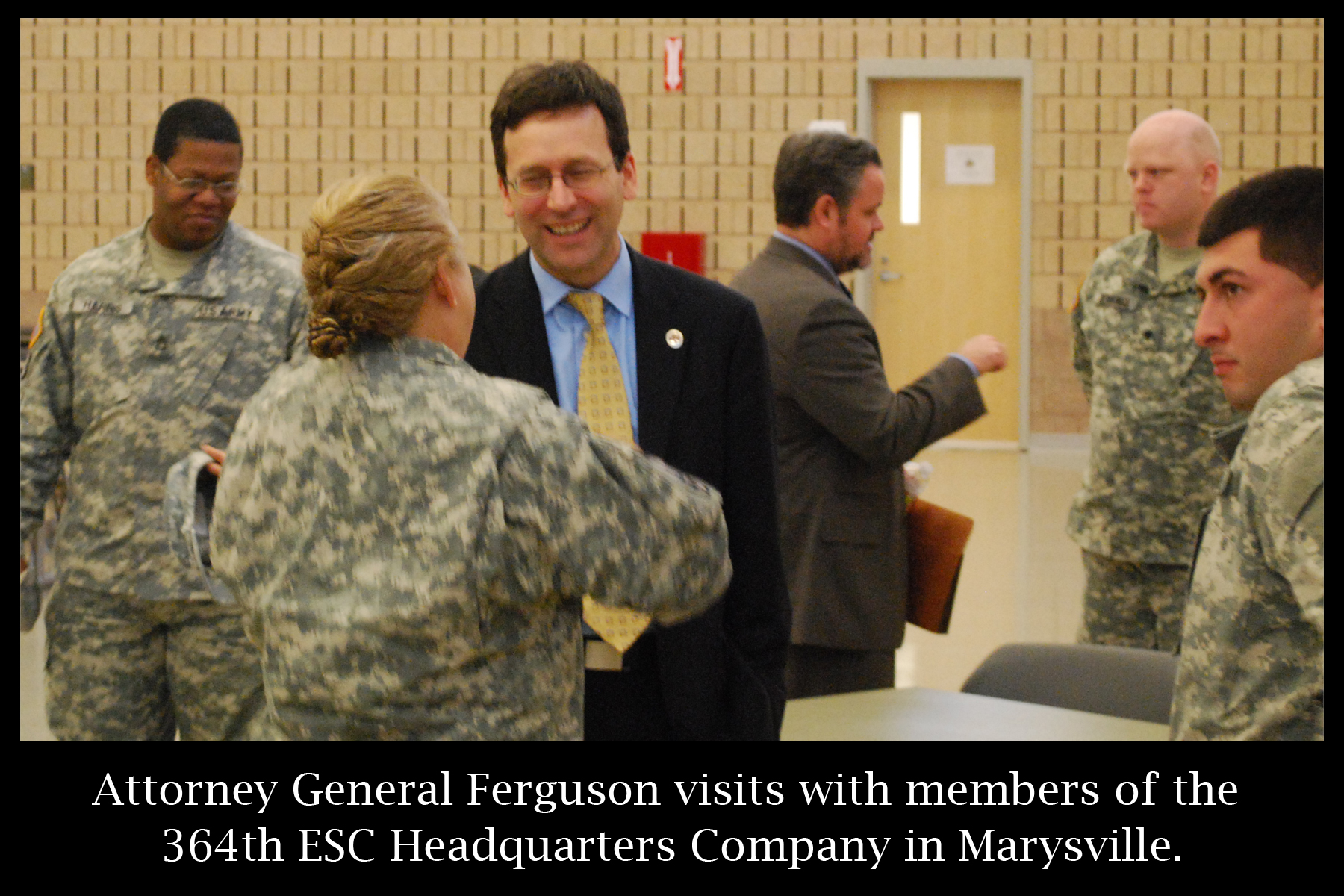 In November, I met with a number of veterans groups and shared our new Veterans and Military Personnel Legal Resource Guide, including the 364th ESC Headquarters Company at the Armed Forces Reserve Center in Marysville.

With approximately 640,000 veteran residents, Washington state has the 12th largest veteran population in the United States. Combined with the over 62,000 active duty military personnel and members of the National Guard and Reserve, veterans and military personnel account for more than 10 percent of Washington’s total population.

It is our goal to ensure these past and present service members have access to the legal resources they need.

Preserving the Integrity of Washington Elections 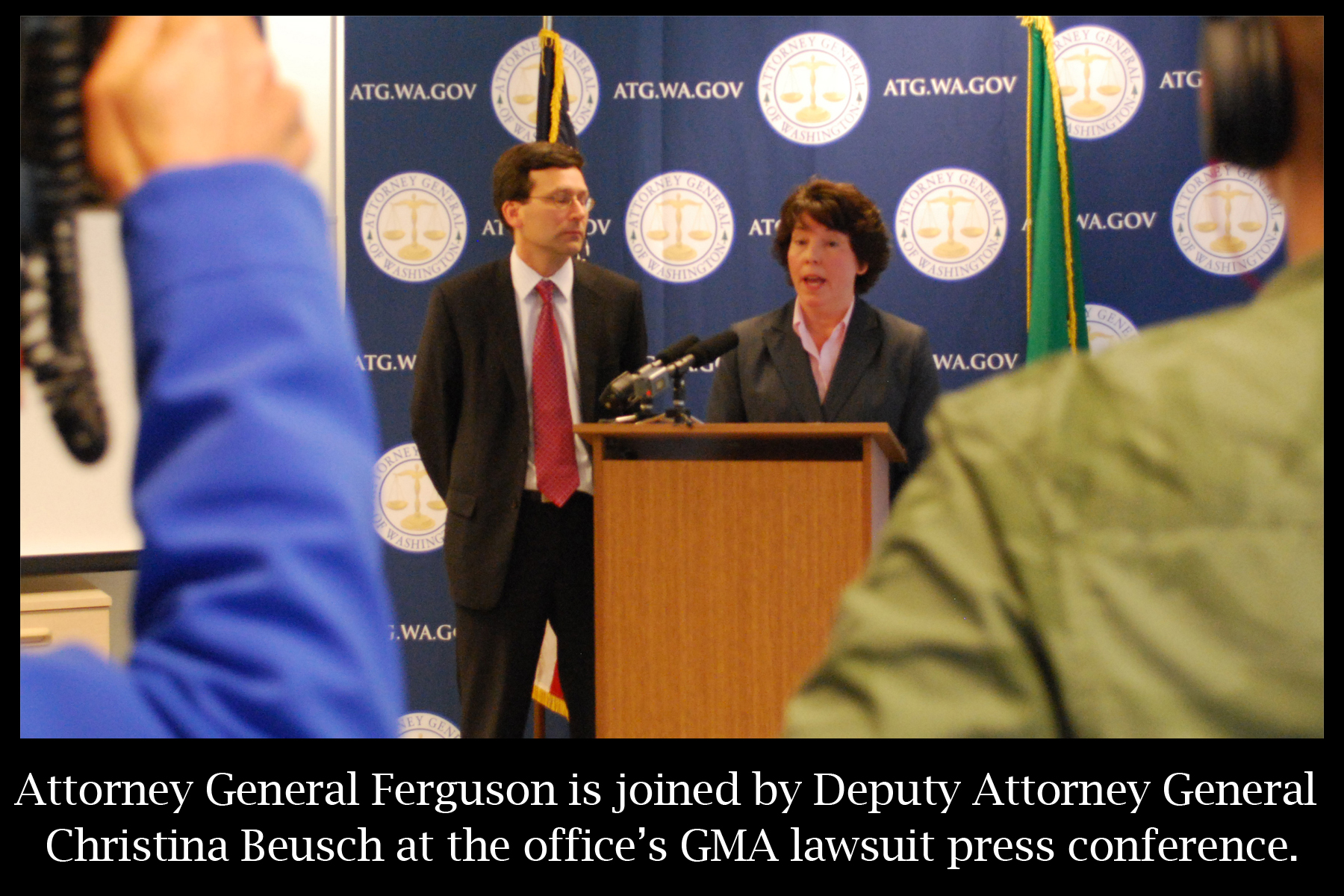 The people of Washington state demand transparency in their elections process and overwhelmingly passed Initiative 276 in 1972 to require campaign disclosure laws. Earlier this year, my office addressed the largest case of political contribution concealment in state history—and the case continues.

In late August, our office received a letter asking us to look into questionable campaign contributions to the No on 522 campaign. Initiative 522 sought to require labeling of genetically engineered foods, seeds and seed products in Washington. It ultimately failed at the ballot box in November.

We investigated and on October 16, my office filed a lawsuit against Grocery Manufacturers Association (GMA) for violating the state’s campaign disclosure laws. GMA is a Washington D.C. trade association representing more than 300 food, beverage and consumer product companies. GMA was the largest contributor to the campaign to defeat Initiative 522 donating more than $11 million. 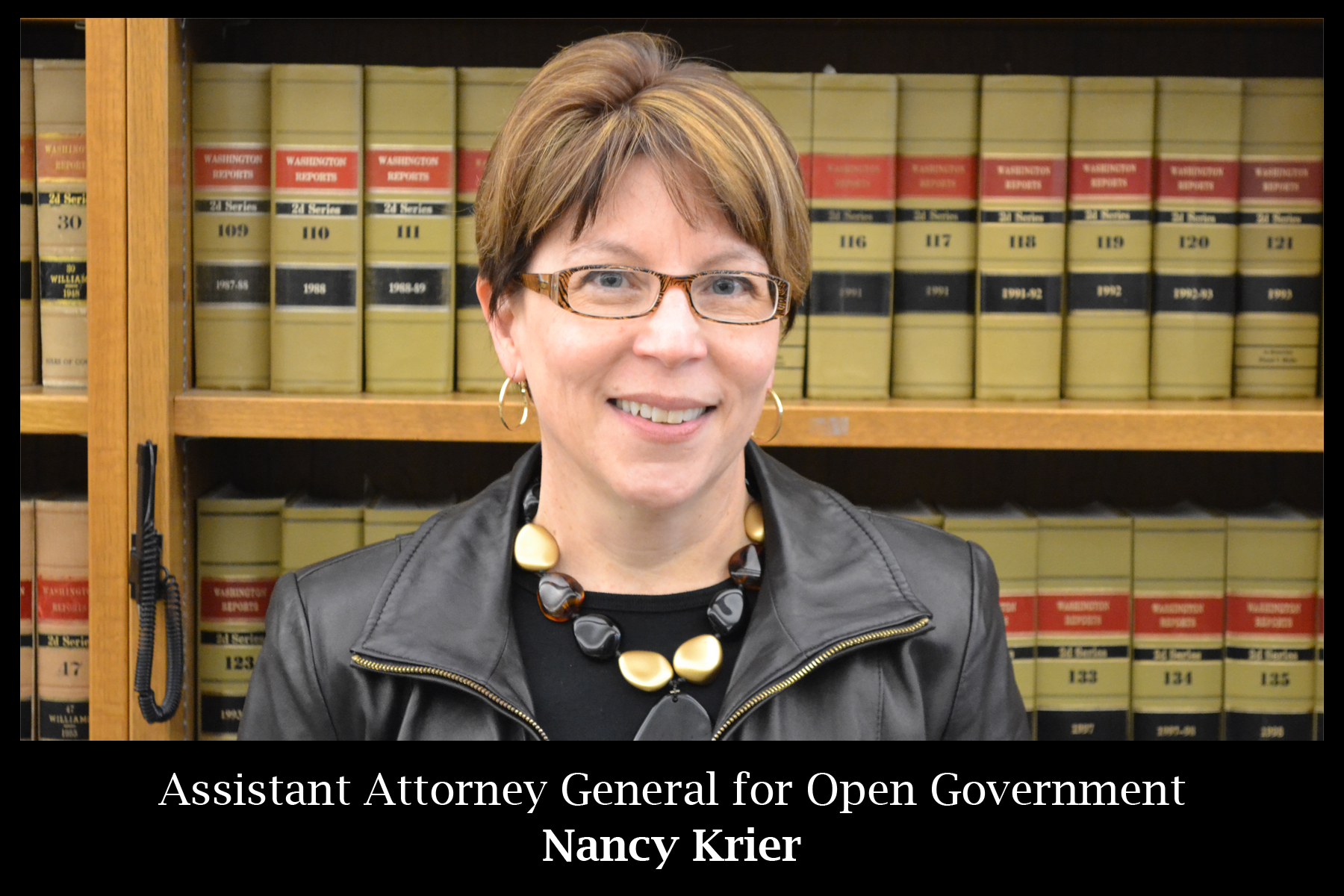 Throughout my career, I have championed open and transparent government. In private practice, I sought public records on behalf of clients, and as an elected official, I reformed King County’s policies on providing public records.

When I took office as Attorney General, I vowed to restore our public records attorney general to a full-time position.

I am pleased to announce the appointment of Olympia attorney and former Assistant Attorney General Nancy Krier as Washington’s new, full-time Open Government lawyer. Nancy is the perfect fit for this position. She brings extensive knowledge and expertise, and a long history of supporting open government.

Washington recently helped lead a $17-million multi-state settlement with Google for tracking information about consumers without their knowledge on Apple’s Safari web browser.

Consumers thought they were protected by Safari’s default privacy settings, but Google found a way around the settings and tracked searches and collected data without consumers’ knowledge.

Continuing the fight for marriage equality 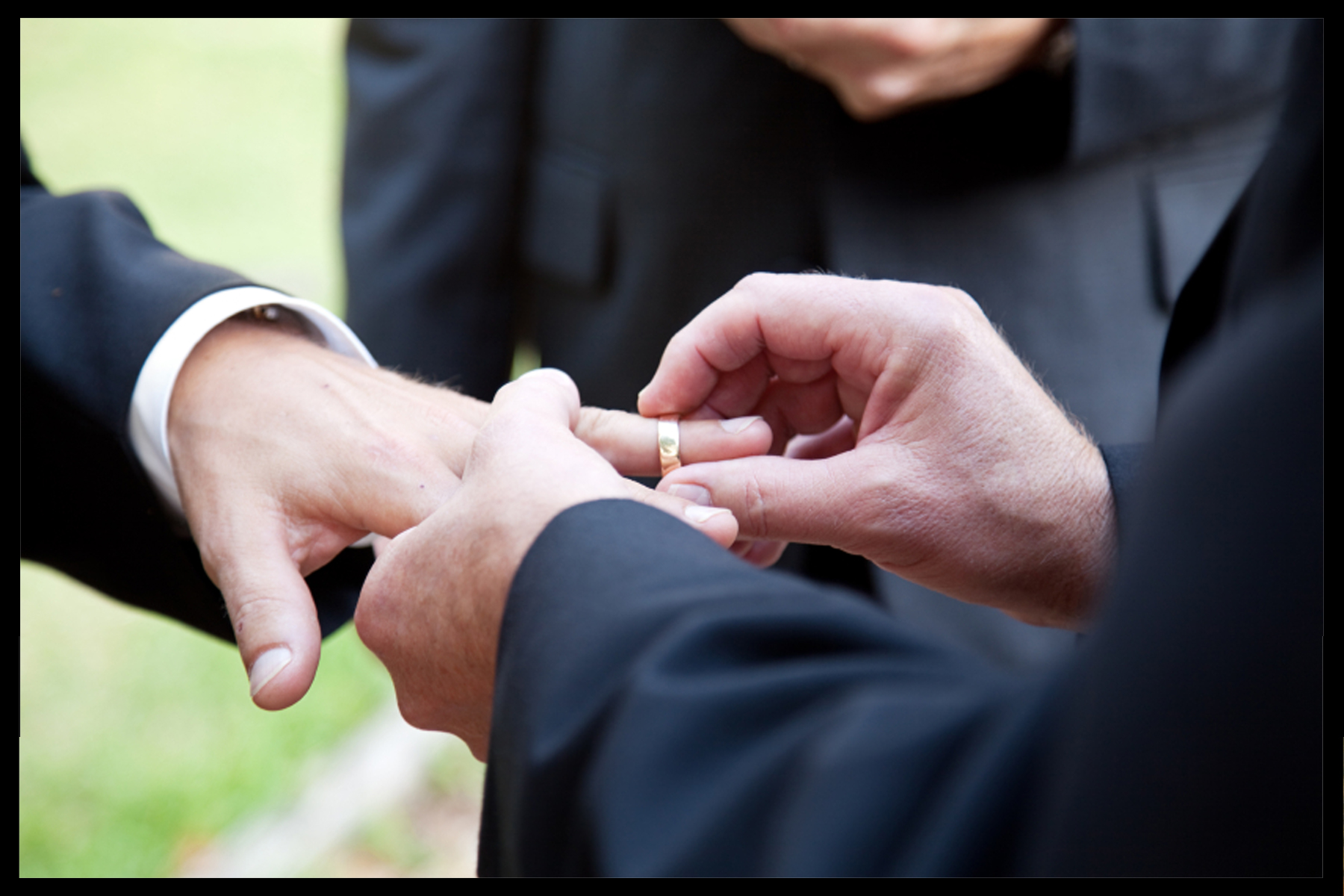 I recently joined a coalition of 15 state attorneys general in filing a “friend of the court” brief before the Ninth Circuit Court of Appeals in support of marriage equality.

A “friend of the court” is not a party to the case, but has knowledge or perspective that is valuable to the court. These briefs are commonly filed in legal matters of broad public interest, like marriage equality.

The states argued that laws prohibiting same-sex marriage in Nevada and Hawaii violate the 14th Amendment and should be struck down as unconstitutional. These briefs were filed before Hawaii became the 14th state to recognize same sex marriage.

We will keep you posted on these cases as they progress. 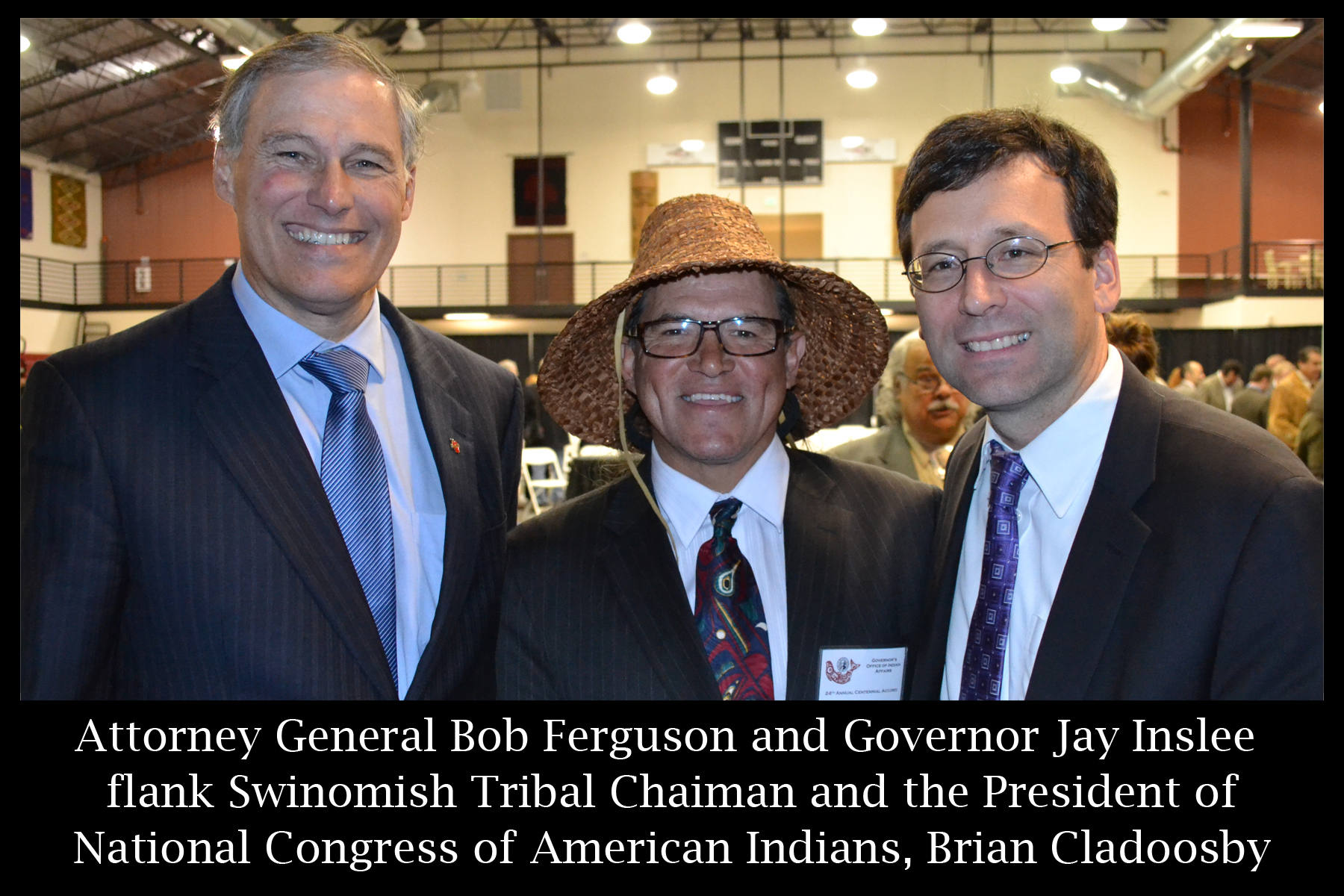 On October 10th, I had the opportunity to attend the 24th Annual Tribal Centennial Accord in which state government and tribal leaders in Washington sit down to discuss issues of mutual interest from criminal justice to environmental protection. I also had the pleasure of visiting a number of tribes and meeting with their leaders around the state including the Skokomish, Squaxin, Nisqually, and Shoalwater Bay tribes.

In October, I was in the Tri-Cities to visit with law enforcement, our AGO Kennewick office and the Tri-City Herald. 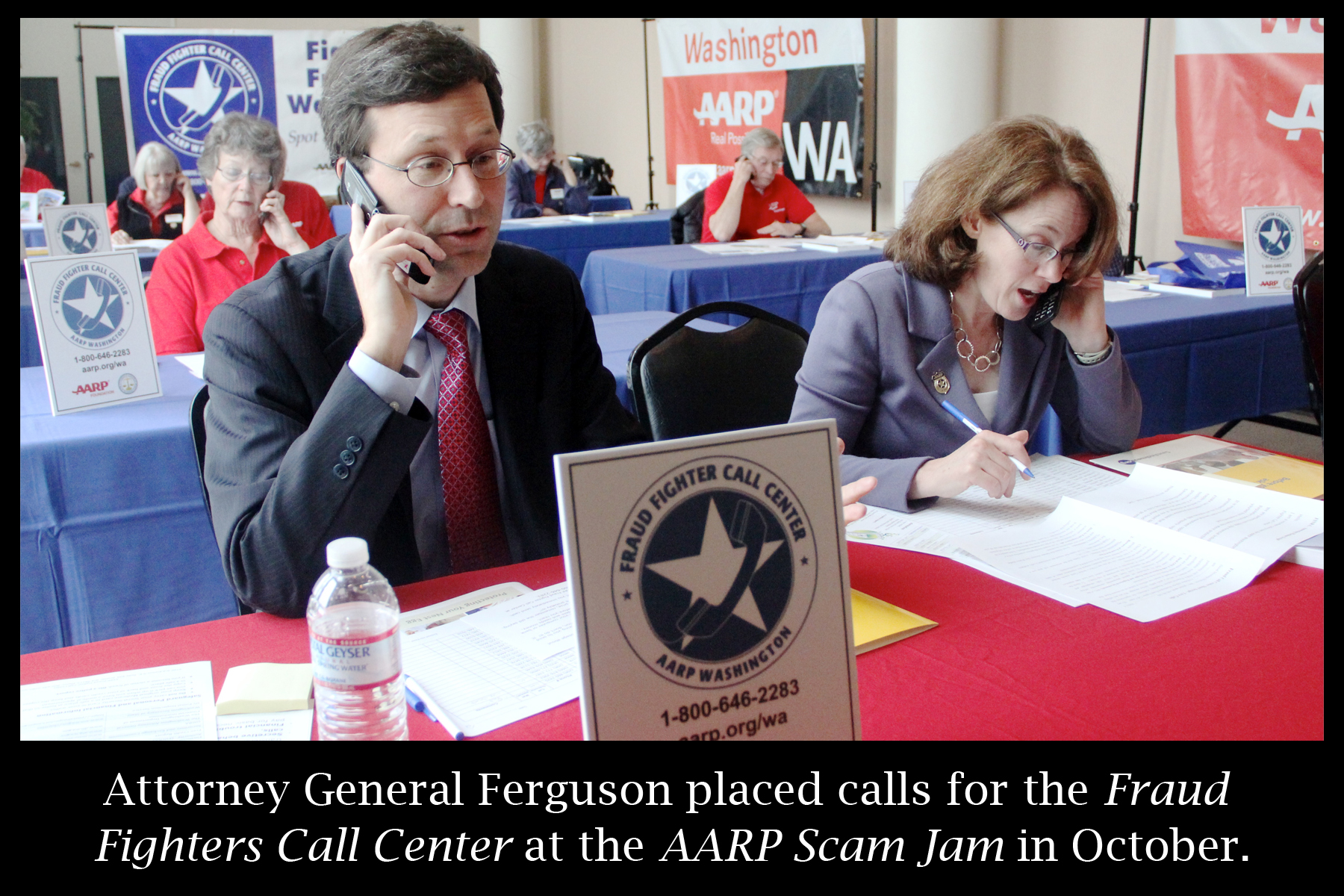 Last month, I traveled to Spokane to provide a grant to the NATIVE project, to visit our local Spokane office, and to meet with the Spokesman-Review newspaper.

I met with seniors at the Washington State Senior Citizen's Lobby Fall Conference in Tacoma on Oct. 18 and joined the AARP Scam Jam on October 23 in SeaTac to talk about keeping consumers safe online .

I also had the pleasure to speak with folks at the Aberdeen Rotary and the Wing Luke Museum in Seattle.

Thank you for the opportunity to serve as your attorney general!

I’m proud to lead one of the most active offices in the nation. Please feel free to contact me with your questions, thoughts or concerns.