You Are Cordially Invited to the

Recognizing members of Law Enforcement who have been killed in the line of duty or have distinguished themselves by exceptional meritorious conduct. 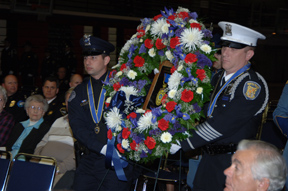 Located on the Washington state Capitol Campus in the shadow of the Temple of Justice and looking north to Heritage Park and Puget Sound, the Washington State Law Enforcement Memorial (WSLEM) is a lasting tribute to law enforcement officers who continue to give their lives in the line of duty. It is a place for survivors to remember their loved ones. It is a place for the public to reflect on the sacrifices made to protect them and marvel at the beauty of the setting overlooking Capitol Lake and the Puget Sound and Olympic Mountains beyond. 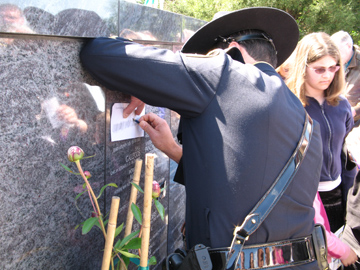 The memorial was designed and constructed by the Washington State Law Enforcement Memorial Foundation.  The private non-profit group undertook a major fund raising campaign and successfully installed a beautiful tribute to fallen officers on the Capitol Campus.  The memorial was designed by John Swanson, architect with the Portico Group and constructed by Edifice Construction Company.  More than $425,000 in private donations was raised to bring the vision to fruition. The Memorial was turned over to the state of Washington on May 19, 2006 as a gift to the citizens of the State of Washington.

The law enforcement memorial is the first Capitol Campus memorial to use the commemorative works account which was authorized in 2005 by the state legislature. This account is in the custody of the state treasurer and will be used for the ongoing care, maintenance, and repair of the law enforcement memorial.  The foundation is seeking funds to fully support this effort.  The Washington State Law Enforcement Memorial Foundation has committed to uphold the dignity and the beauty of the memorial through perpetuity.

Since 1855, 34 years before Washington Territory became a state, more than 280 law enforcement officers have been killed.  The individuals whose names are carved into the Memorial must be law enforcement officers who have been killed in the line of duty. The Memorial will provide a lasting tribute to those brave officers and tangible recognition of our deep appreciation of their sacrifice.