AG announces sweep to crack down on illegal immigration assistance 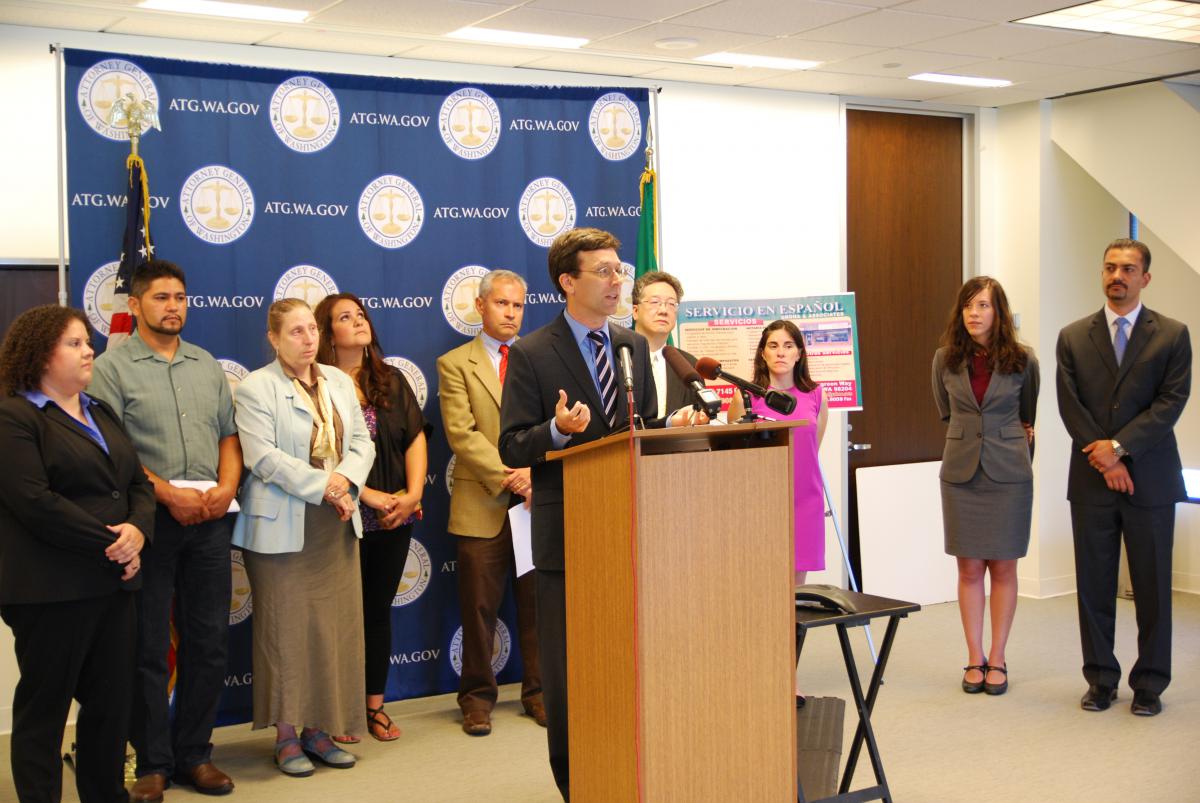 Joined by community leaders from Northwest Immigrant Rights Project, OneAmerica, the American Immigration Lawyers Association of Washington, and the Chinese Information and Service Center, Ferguson announced the actions are part of an initiative to increase enforcement of Washington’s consumer protection laws against unauthorized immigration assistance.

“Scammers who prey on Washington residents who are working hard to follow complex federal immigration laws will not be tolerated,” Ferguson said. “Immigration services fraud has dire consequences for Washington families, and my office is committed to prosecuting these frauds.”

Immigration services, or “notario,” fraud is illegal under Washington state’s Immigration Services Fraud Prevention Act (ISFPA). Signed into law in 2011 at the request of the Attorney General’s Office, the law protects consumers from unauthorized entities that peddle assistance completing immigration forms and navigating immigration processes that legally can only be provided by qualified attorneys and accredited representatives.

These unlicensed immigration “consultants” are often notaries public who prey on immigrant clients by referring to themselves as “notarios” or “notarios públicos,” terms that refer to attorneys or individuals with advanced legal training in Latin American countries.

The ISFPA specifically prohibits the use in advertising of these and any other deceptive terms that imply professional legal skills in the area of immigration law.

While immigration services fraud is prevalent in many Latino communities, it also affects other immigrant communities such as North and West African, Korean, Chinese, Vietnamese, Russian and Ukrainian.

Immigration services fraud places the legal status of unsuspecting immigrant consumers in jeopardy, risking their ability to live and work in the U.S. — and takes their hard-earned money in exchange for dubious services.  In the worst cases, consumers assured that they have qualified for lawful permanent residency have instead ended up in deportation proceedings.

Ferguson’s office is stepping up enforcement, including four actions filed in court today:

In 2011, the Attorney General’s Office sued EC New Horizons and EC Horizons after an investigation revealed that Cruz and Terry improperly provided legal advice and represented themselves to be immigration consultants. A court-approved consent decree resulted, prohibiting further violations and imposing $6,000 in costs and fees, plus $37,000 in civil penalties. A large portion of the penalties was suspended, provided they complied with the consent decree.

Ferguson’s office is now pursuing tougher penalties in Pierce County Superior Court.  The state’s lawsuit seeks payment of the previously suspended civil penalties, plus an additional $25,000 civil penalty from both Cruz and Terry for violations of the Consent Decree.  The AGO also seeks close to $150,000 in restitution for victims, a new injunction barring them from further engagement in any immigration services whatsoever, and costs and fees.

As part of the stepped-up enforcement efforts, AGO investigators identified three businesses with no attorneys on staff, advertising services they legally could not provide. Tacoma-based Rosi Immigration Services, a self-proclaimed “immigration specialist,” provided unauthorized legal assistance to 156 people since 2011, accounting for 95 percent of the firm’s overall business.

Both Everett-based Servicio En Español and Orona & Associates represented that they were “notarios públicos” and offered a variety of other unlawful legal assistance.

The consent decrees filed today enjoin all three entities from further violating the ISFPA and assess penalties, costs and fees as outlined above.

AG Ferguson also announced that his office awarded a $125,000 grant to the Northwest Immigrant Rights Project (NWIRP) to address the unauthorized practice of immigration law. NWIRP, a non-profit organization providing legal assistance to people from more than 150 countries, will use the funds to prevent notario fraud through education and outreach and will provide legal assistance to actual and potential fraud victims.

“We are thrilled to be able to partner with the Washington State Attorney General’s Office to help prevent notario fraud,” said Jorge L. Barón, the agency’s executive director.“NWIRP is excited to be able to launch this new project to not only educate community members about how to get the right type of help in immigration matters but to provide legal assistance for those who cannot afford a private attorney.”

AG Ferguson and community leaders urged immigrant consumers to exercise care when hiring an immigration consultant.Always check credentials and make sure anyone who submits an immigration petition on your behalf is authorized to provide immigration-related services before you pay any money or turn over personal information.

Here are some more tips:

There are a number of resources to help consumers find qualified immigration assistance:

File a complaint with the Attorney General’s Office

Unfortunately, immigration services fraud is often not reported because victims are afraid to come forward.

Washington’s consumer protection laws protect everyone who lives in our state. The Attorney General’s Office is here to help all consumers.

Our office is not part of the federal government and will not turn over information to immigration authorities.

If you believe you have been a victim of immigration services fraud, file a complaint with the Attorney General’s Office online at www.atg.wa.gov.

We can take calls in multiple languages.