SEATTLE — Attorney General Bob Ferguson will file a lawsuit today seeking to block new Trump Administration rules that remove significant protections against the mistreatment of immigrant children and families apprehended at the U.S. border, allowing for their indefinite detention in facilities without adequate standards of care or state oversight.

Hundreds of immigrant children have either been transferred to Washington state-licensed facilities, or released into the state in the last year alone.

Interviews with immigrant children and teenagers in Washington state facilites, conducted last month as part of Washington state’s oversight authority, revealed appalling conditions at federal detention facilities. In addition to a lack of toothbrushes, soap or access to showers reported earlier in the media, the children reported extremely cramped cells, younger kids put in cages as punishment and guards throwing food on the ground for children to fight over.

“This Administration’s cruel immigration policies are reminiscent of shameful chapters in American history — the internment of Japanese Americans, and the forced separation of Native American families,” Ferguson said. “We won’t allow the Trump Administration to drag us back to the devastating and immoral practices of the past.” 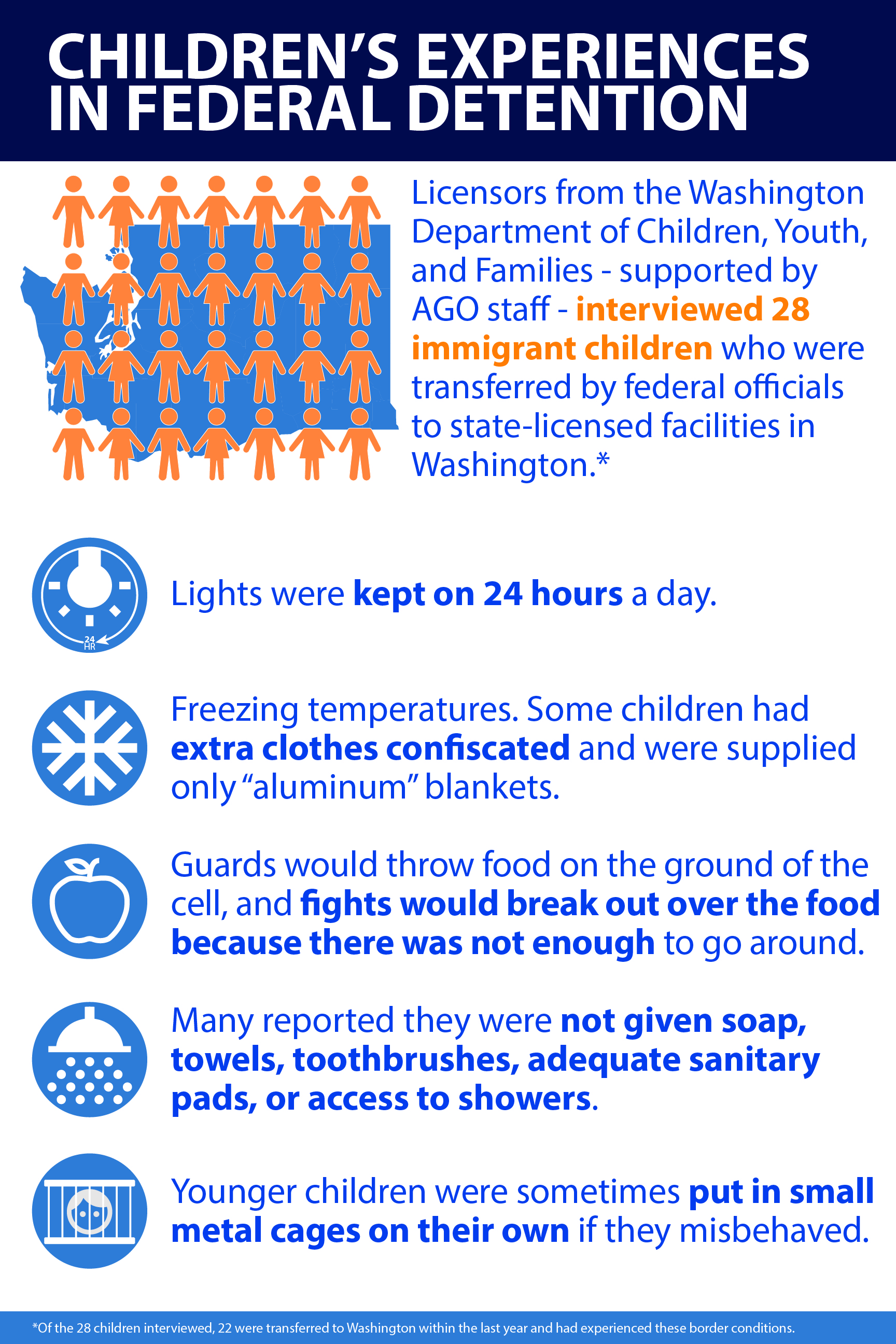 “Detaining families indefinitely and needlessly inflicting trauma on young children is not an immigration policy — it’s an abhorrent abuse of power. This administration has intentionally sought to dehumanize and degrade the immigrants at our southern border. The president’s actions and policies are cruel, inhumane and illegal,” Gov. Inslee said. “Washington will fight to stop this unconscionable policy.”

The new rules, published Friday, override a longstanding court-approved settlement — known as the Flores Agreement — that governs the humane treatment of immigrant children in federal custody. Ferguson asserts that the Trump Administration’s new rules unlawfully permit federal officials to detain children and families in unlicensed facilities without adequate standards of care to protect the safety and well-being of immigrant children. The new rule also allows for their prolonged, even indefinite detention.

The rules give the federal government the ability to suspend its standards in the event of an “influx” of immigrants. The rules define an influx broadly. In fact, many instances of increases in immigration over the last several years would allow the government to suspend even these minimal standards under the rules.

The new rules also strip states of their role in regulating the minimum standards for facilities that house immigrant children for the federal government. They remove the Flores Agreement requirement that immigrant children be placed in state-licensed facilities or with state-approved foster families. 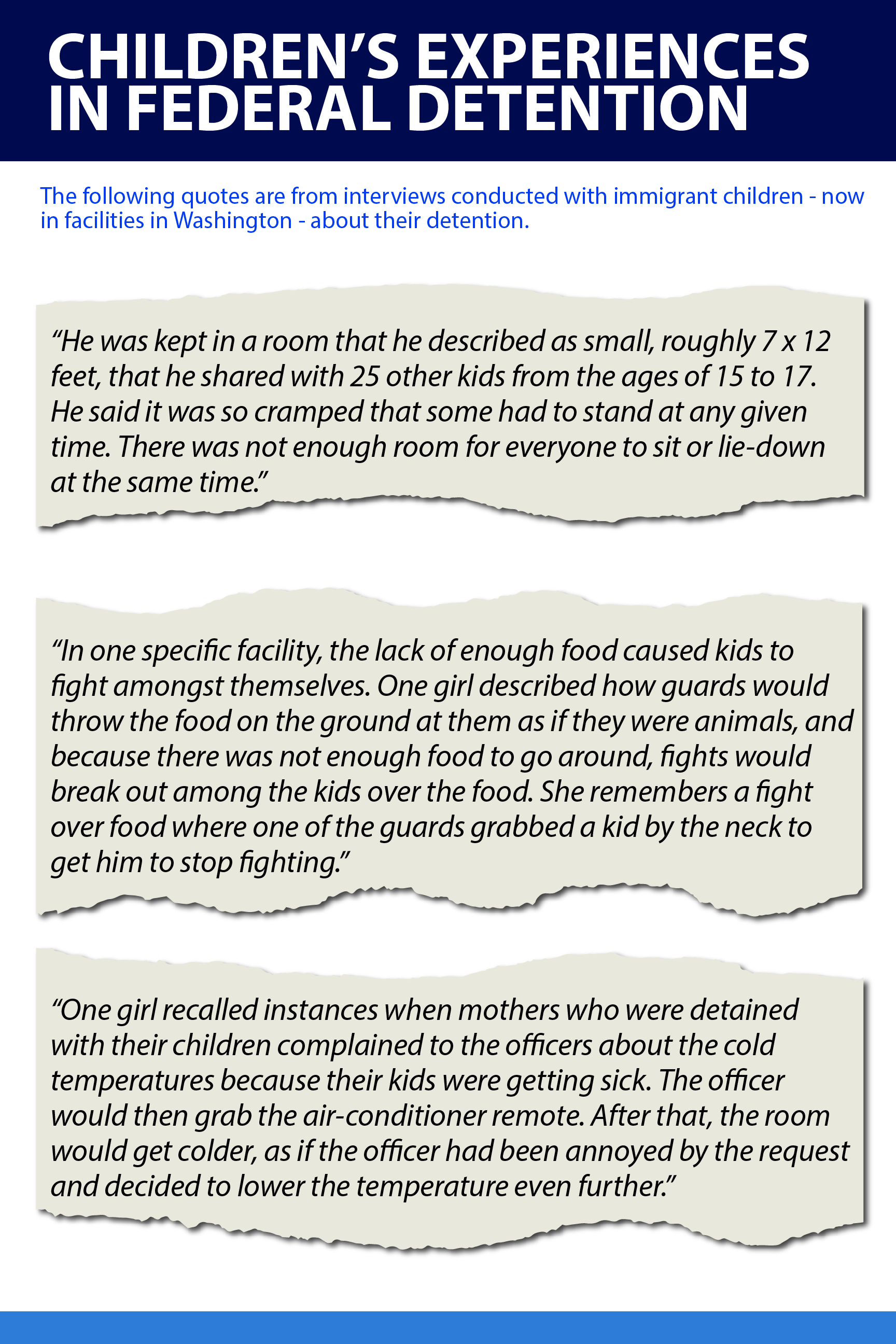 In today’s lawsuit, the attorneys general assert that prolonged detention of children and families in “prison-like conditions” will have profound, long-term impacts on their mental and physical health.

The number of children detained at facilities in the state fluctuates, depending upon the numbers of new placements and releases.

Some of their heart-wrenching stories are detailed in a declaration Washington expects to file in this case in the coming weeks.

Among the many disturbing experiences, one girl recounted that guards at the federal detention facility “would throw the food on the ground at them as if they were animals, and because there was not enough food to go around, fights would break out among the kids over the food.”

The children shared many other experiences in detention, including lights being kept on 24 hours a day and freezing temperatures.

“It was nearly impossible to sleep because the guards would wake them up every few hours during the night,” the declaration states. The child told investigators that they would do roll call “at 12 a.m., 3 a.m., 6 a.m. and 9 a.m. He felt that the guards were intentionally depriving them of sleep by doing roll call in the middle of the night.”

Some had their extra clothes confiscated, and were only supplied thin “aluminum” blankets.

One girl reported being among a dozen children detained in a room so small that they could not all sit, let alone lie down at the same time. “Those that did lay down had to scrunch up their bodies because there was not enough room to extend their legs.”

Many detained children reported they were not given toothbrushes, soap, showers, or towels while they were detained, sometimes up to 10 days. Girls on their periods reported not being offered showers or a change of clothes when appropriate, and were only given one sanitary pad per day.

Some of the children reported being housed in cells with children as young as 4 or 5 years old, without their parents. “The older girls in the room were told to take care of the small children, and were constantly told to keep them quiet and stop them from crying ‘or else,’ ” the declaration states.

Others reported that younger children “were often put in small metal cages (“jaulas”) on their own if the misbehaved or were restless.” Others saw young children locked alone in dark rooms as punishment for asking too many questions or for crying. CBP agents laughed at mothers who asked for formula or medicine for sick babies, and told children who asked for different food that they would be deported.

If the federal government’s new rules were in effect, the state would not be able to tell their stories, as Washington would have no oversight authority.

Additionally, state-run programs and services will bear the burden of those long-term impacts after the children are ultimately released into our communities. In the last fiscal year ending in July, 566 immigrant children were released to sponsor families in Washington state by the Office of Refugee Resettlement. More than 2,500 have been released into the state since October of 2013.

In addition, the new rules eliminate the ability of unaccompanied minors to challenge their detention placements in immigration court.

Today’s lawsuit asserts that the new rules violate the Fifth Amendment’s Due Process Clause and the Administrative Procedure Act. The attorneys general ask the court to block the implementation of the rules and declare them invalid.

The current rules governing the humane treatment of immigrant families and children are rooted in a case originally filed in the mid-1980s, Flores v. Reno. An agreement was reached between the parties — and amended several times in subsequent years — that set limits on the length of detention and standards of treatment of immigrant children, as well as guidelines for their release to adult relatives or state-licensed programs.

Litigation related to the Flores case has continued, with the most recent ruling on Aug. 15, less than two weeks ago. In that ruling, a three-judge panel with the Ninth Circuit Court of Appeals turned away an appeal by the Trump Administration where government lawyers attempted to argue that soap, toothbrushes and toothpaste were not necessarily required elements of a “safe and sanitary” detention environment.

“Assuring that children eat enough edible food, drink clean water, are housed in hygienic facilities with sanitary bathrooms, have soap and toothpaste, and are not sleep-deprived are without doubt essential to the children’s safety,” the judges wrote in their opinion.

The new rules are the latest chapter in the Trump Administration’s intolerant border policies.

On April 6, 2018, Attorney General Jeff Sessions announced a new “zero tolerance” policy on the United States’ southern border. Instead of making case-specific evaluations of individual cases, respecting due process rights and family integrity, the Trump Administration began prosecuting all possible immigration crimes, detaining all accused adults. The intended and acknowledged effect was the separation of parents and children at the border.

In June of 2018, Ferguson filed a lawsuit challenging the Administration’s “zero tolerance” policy. Ferguson’s case is currently pending before the U.S. District Court for the Southern District of California, along with several other related cases challenging the policy.

The Trump Administration was ultimately ordered to reunite the thousands of children impacted by the policy with their families.

In September of 2018, the Trump Administration published its proposed new rules to override the legal protections for immigrant children established by the Flores Agreement. Ferguson and Gov. Jay Inslee voiced their opposition to the proposed rules, comparing them to policies in U.S. history that allowed the forced separation of Native American families and the internment of Japanese Americans during World War II.

Lawsuits against the Trump Administration