OLYMPIA — Attorney General Bob Ferguson today filed a civil rights lawsuit against Ostrom Mushroom Farms in Sunnyside for discriminating against U.S. residents and women, and retaliating against workers who spoke out. Ostrom abused the H-2A system by systematically firing its majority-female, Washington mushroom pickers and replacing them with H-2A foreign agricultural workers who were mostly male. Foreign H-2A workers have fewer rights than U.S.-based workers.

From January 2021 to May 2022, the company fired over 140 of its U.S.-based mushroom pickers, most of whom were women. Many of them already had years of experience working at the farm. During the same period, Ostrom hired 65 temporary, foreign agricultural workers under the federal H-2A program — all but two of whom were men. In addition, as the company was firing its majority female workers, it posted a job advertisement on Facebook seeking “only males” to work at the farm.

When a group of Ostrom workers came forward with their concerns about the discrimination, Ostrom’s management retaliated against workers who tried to assert their rights, including through warnings, discipline, and one case of physical assault.

Ferguson’s lawsuit, filed in Yakima County Superior Court, asserts that Ostrom discriminated against its workers on the basis of gender, citizenship and immigration status, in violation of the Washington Law Against Discrimination.

“The evidence my team uncovered is clear,” Ferguson said. “Ostrom discriminated against female farmworkers and Washington residents so that it could hire mostly male foreign H-2A workers who have fewer rights. Their conduct is disturbing and unlawful.”

The H-2A program under the U.S. Department of Labor allows employers to hire seasonal agricultural workers. H-2A workers are brought in from other countries to work at a specific employer — meaning if they leave the employer, they must also leave the country.

The H-2A program is intended only for employers who face a shortage of laborers. Employers cannot apply for this program unless they can show that there is a shortage of U.S.-based workers — workers located in their region — who are willing, qualified and able to work.

However, there were Washington residents willing to work for Ostrom in the Yakima area where Ostrom’s Sunnyside facility is based. In fact, the company systematically fired almost 80 percent of its 180 pickers between January 2021 and May 2022.

Ostrom workers reported to the Attorney General’s Office that around the time Ostrom started applying for the H-2A program in 2021, Ostrom also increased the pickers’ hourly production rate and began disciplining pickers who did not meet the new rate with warnings, suspensions, and terminations.

However, Ostrom never told the pickers how much they were actually harvesting, nor does this information appear on paystubs, where it usually would appear for agricultural workers subject to production minimums. Ferguson’s lawsuit asserts the minimum production rate was used as a pretext to fire U.S.-based pickers.

The company misrepresented the qualifications, wages, and availability of employment to prospective U.S.-based workers in the surrounding Yakima area. For example, Ostrom represented that workers needed at least three months of agricultural experience to work at the farm — even though they employed H-2A workers who had no such experience. Ostrom paid some U.S.-based workers less than its H-2A workers, offering its H-2A workers a wage rate of $17.41 an hour, when some U.S.-based pickers were only being paid on average $14 an hour.

Ostrom discriminated against its female workers 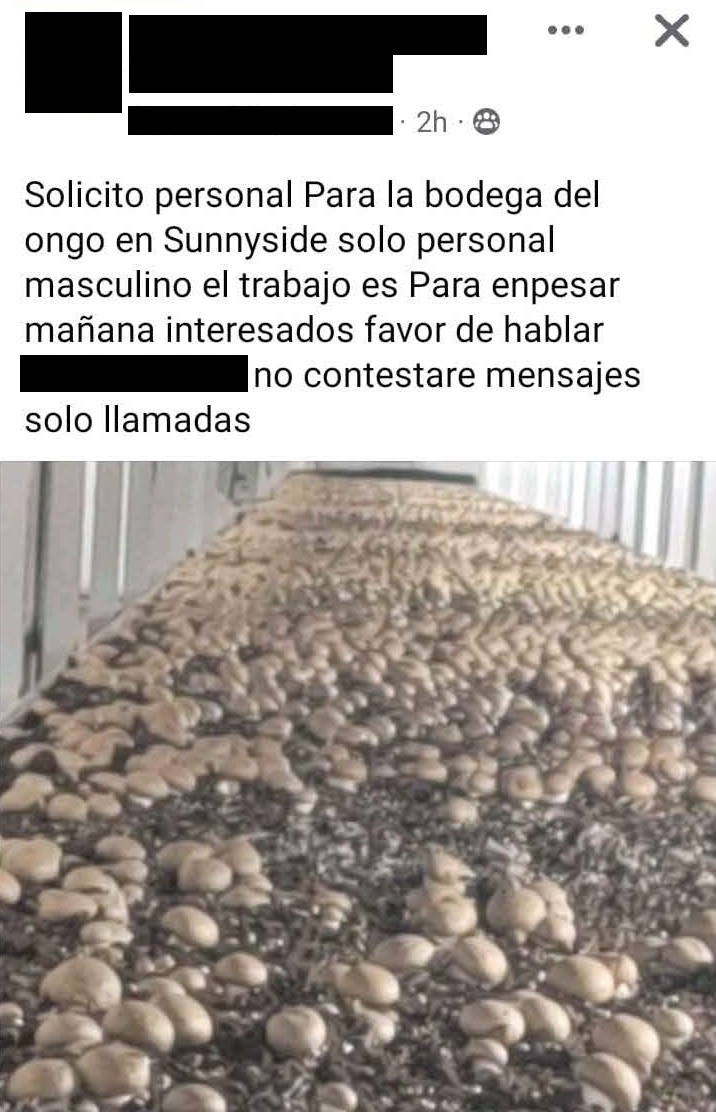 Ostrom violated the Washington Law Against Discrimination when it fired and refused to hire female workers. Ostrom posted to a Facebook group for Yakima-based farmworkers seeking “only males” to apply for its upcoming season, during the same time it was systematically firing its majority female workers.

Once the H-2A workers arrived at Ostrom, the company only hired four U.S.-based workers who were female, compared to 18 male workers.

Ostrom retaliated against workers who spoke out

Since the summer of 2022, a group of Ostrom workers have repeatedly presented their concerns to Ostrom management regarding unfair and discriminatory workplace conditions at Ostrom’s Sunnyside facility.

Instead of addressing these concerns, Ostrom’s managers retaliated against the workers who spoke out. Retaliating against employees for speaking up against discrimination is a violation of the Washington Law Against Discrimination.

One harvesting room manager physically assaulted a female worker with a metal cart immediately after she returned to her shift from a meeting with Ostrom’s management in which she expressed her concerns about work conditions.

The retaliation also included unfounded discipline and warnings. For example, a manager issued a warning to an employee accused of bringing a weapon to work, who had not.

Ferguson’s lawsuit asserts that the company violated the Washington Law Against Discrimination in three main ways:

The company also violated the Consumer Protection Act when it deceived prospective and existing U.S.-based workers regarding qualifications, wages, and availability of employment. The company’s deception included:

Ferguson’s lawsuit asks the court to block Ostrom from continuing its illegal discrimination and issue penalties against the company. Ferguson is also seeking front and back pay for those who were fired, and compensation for U.S.-based workers who were paid less than the H-2A workers.

If you worked at Ostrom since January 2021, we want to hear from you. Contact our Civil Rights Division by emailing ostrom@atg.wa.gov or by calling 1-833-660-4877, and select Option 5.

Ferguson created the Wing Luke Civil Rights Division in 2015 to protect the rights of all Washingtonians by enforcing state and federal anti-discrimination laws. Ferguson named the division for Wing Luke, who served as an Assistant Attorney General for the State of Washington in the late 1950s and early 1960s. He went on to become the first person of color elected to the Seattle City Council and the first Asian-American elected to public office in the Pacific Northwest.