The company, which runs the Seattle Stem Cell Center in lower Queen Anne, charged 107 people a total of $748,250 for these unsubstantiated treatments. The company charged its clients as much as $10,000, out of pocket, for participating in the clinic’s purported “patient funded research.”

US Stemology claimed it was treating patients as part of clinical trials. In reality, the “trials” did not follow generally accepted standards of scientific research — and the researchers themselves led the “independent review” of the trials.

“Dr. Meraglia and US Stemology advertised stem cells as a life-changing miracle cure that could treat almost anything — even COVID,” Ferguson said. “They preyed on people’s fears and frustrations about their health to sell hundreds of thousands of dollars in unproven treatments. Their conduct brings to mind a 21st century version of snake-oil sales tactics.”

The Attorney General’s Office was first alerted to this case when a concerned Washingtonian reported the company’s false claims that it could treat and prevent COVID-19. The company made these claims for at least three months in the early stages of the pandemic.

“The reason for this is because stem cell therapy treats the lungs first and has long term anti-inflamatory and immune modulating properties,” the guide read.

After the Attorney General’s Office sent a cease and desist letter, the company removed from its website the claims that stem cells are effective against COVID-19. 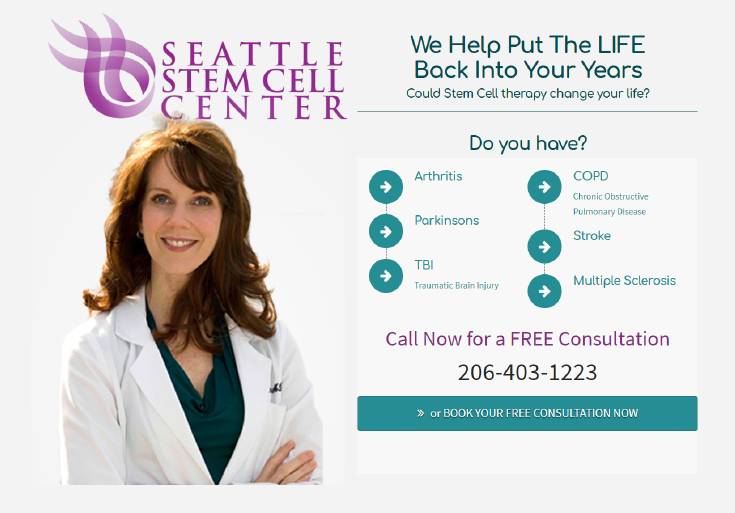 While looking into the consumer complaint, investigators at the Attorney General’s Office discovered that the company claimed it could treat dozens of other conditions — including serious heart, autoimmune and neurological conditions — without reliable scientific evidence that stem cell treatments are effective in treating them.

US Stemology began marketing that it could treat these conditions starting as early as 2018. Meraglia began the stem cell clinic out of the basement of the medispa she owned, which mostly performed aesthetic and cosmetic treatments at the time.

The Seattle Stem Cell Center performed its stem cell “treatments” on over a hundred patients for a host of serious, chronic conditions, including asthma, muscular dystrophy, stroke, diabetes and Crohn’s disease.

After the Attorney General’s Office began its investigation, US Stemology stopped taking new stem cell patients in June 2021. Many of the deceptive treatment claims remain listed on its website.

The clinic and Meraglia promoted their unproven stem cell treatments as part of a “clinical trial.” Instead of paying patients to participate in a trial, like most legitimate trials do, US Stemology charged patients thousands of dollars to undergo experimental treatments. In addition, the “trial” the company ran was marred by conflict of interest and shoddy scientific practices.

The FDA requires clinical trials be approved and monitored by an Institutional Review Board, or IRB. Per FDA requirements, members of IRBs cannot have an interest in a project they are reviewing. Universities and large research institutions operate most IRBs.

In addition to this clear conflict of interest, the trials themselves did not follow accepted standards of research. For example, the trials did not use a control group or a standard course of treatment for each patient, and relied solely on patient surveys to assess results. Typically, legitimate clinical trials pay patients — not charge them thousands of dollars — for agreeing to undergo experimental treatments.

Instead of performing legitimate clinical research, US Stemology used a biased, self-interested IRB to mislead patients to believe that they were participating in “clinical research” — when they were, in reality, paying to receive unproven medical treatments.

Details of the lawsuit

Ferguson’s lawsuit asserts that US Stemology and Meraglia’s unfounded claims are unfair and deceptive business practices in violation of the Washington Consumer Protection Act.

The lawsuit asks the court to require US Stemology to:

If you see suspicious or unproven claims about health treatments, report it to the Attorney General’s Office by filing a complaint at https://www.atg.wa.gov/file-complaint.