Judge finds 15,000+ Washington businesses harmed by the schemes, estimated to be eligible for more than $1.27 million in restitution

CA Certificate Service and Labor Poster Compliance sent hundreds of thousands of letters to Washington business owners that deceptively appeared to originate from the government. The letters demanded payments for posters or certificates that they deceptively implied were required to purchase. The certificate is not mandatory and available from the state for a fraction of the cost that CA Certificate Service demanded. The posters are available from state and federal agencies for free.

The Attorney General’s Office uncovered evidence that the defendants made more than $5.3 million in profit from their nationwide deceptive schemes. The action is the first judgment against the businesses and owners finding them liable for breaking the law anywhere in the country.

In March 2019, the Washington Secretary of State issued an alert regarding the CA Certificate Service scam, but the company continued to operate in the state until Ferguson filed a lawsuit.

If you suspect you are the target of similar scams, please contact the Attorney General’s Office. You can file a complaint online at atg.wa.gov/file-complaint or call the office toll-free at 1-800-551-4636.

The motion before the judge included declarations from small business owners across the state who sent money to both companies. Among them were:

How both companies targeted Washingtonians

Shortly after they registered their business, the company mailed letters to Washington business owners through its print and mail vendor located in Florida. 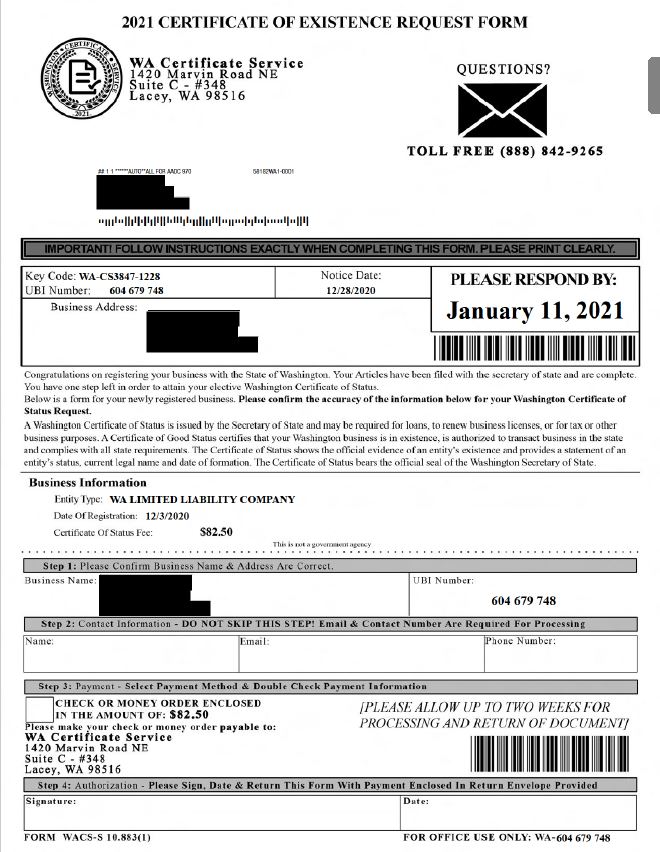 The letters and envelopes imitated official government mail, and created a false sense of urgency that the business owner was required to purchase a “Certificate of Status” for $82.50 to complete a business registration process.

Labor Poster Compliance initially sent a letter that urged small business owners to pay $79.25 for an all-in-one workplace poster, then later raised its price to $85.25. It claimed the poster had required disclosures of certain state and federal laws. The company also cited federal laws that it represented as a requirement to place labor posters, and included threats of penalties and legal action for non-compliance.

During the litigation, the Attorney General’s Office identified the fourth owner of Labor Poster Compliance, Sean Wilson, and he has until Nov. 1 to respond to the lawsuit. The five owners are located in the St. Petersburg, Florida, area and Labor Poster Compliance continues to operate in states across the country.

What is actually required for a small business

In March 2016, a King County Superior Court judge ordered civil penalties and restitution of $1.15 million in Ferguson’s lawsuit against Mandatory Poster Agency. The judgment included $793,540 in civil penalties and up to $362,625 in restitution for victims. The Michigan-based company duped thousands of Washington small businesses into paying for documents many Washingtonians thought were coming from a state agency. The judge found Mandatory Poster Agency violated the state Consumer Protection Act 79,354 times.

Also in February 2016, a Thurston County judge ordered LA Investors LLC, a California company that duped new Washington property owners into buying overpriced deeds, to pay more than $3.6 million for its deceptive practices. The court found the company violated the state Consumer Protection Act at least 256,998 times by sending deceptive mailers. It sent official-looking notices implying that consumers needed to buy a dramatically overpriced $89 copy of their deed. Deeds typically cost only a few dollars from a local county office, and many property owners can obtain a copy of their deed for free online.

Judge Whedbee cited both of these cases in his court orders.