An August 2020 lawsuit by Ferguson asserted the company violated Gov. Jay Inslee’s Emergency Evictions Proclamation. Inslee’s proclamation establishes a temporary moratorium on evictions for the inability to pay rent as Washingtonians cope with the ongoing COVID-19 pandemic. The proclamation specifically prohibits landlords from threatening to evict tenants for unpaid rent during the emergency.

Whitewater Creek, Inc. is a real estate company that, through a number of related entities, manages and owns 1,000 low-income housing units across 12 housing complexes in eastern Washington. Many of their properties were developed with millions of dollars in taxpayer funding in the form of tax-credit equity and tax-exempt notes authorized by the Washington State Housing Finance Commission.

As a result of the legally enforceable agreement, Whitewater Creek is now legally required to train employees on tenants’ rights. Additionally, the company must give the Attorney General’s Office notice over the next three years when it initiates eviction proceedings or refers a tenant to its landlord-tenant attorneys for non-payment of rent. These provisions will help ensure that Whitewater Creek does not illegally evict tenants when the eviction moratorium is lifted.

“Due to the pandemic, many Washingtonians are struggling,” Ferguson said. “Whitewater Creek is a sophisticated company. Nonetheless, it illegally threatened its tenants, most of whom have limited means. This resolution holds them accountable and sends a message to others that they need to follow the law.”

Evidence gathered by the Attorney General’s Office revealed that Whitewater Creek personnel verbally threatened at least five residents at properties it owns and manages at the direction of majority owner Maryann Prescott. Emails showed Prescott wanted tenants to know they would be evicted for unpaid rent and/or fees as soon as courts reopened for eviction proceedings. Whitewater Creek personnel did not disclose to its tenants that the eviction moratorium protected them from being threatened with future eviction. 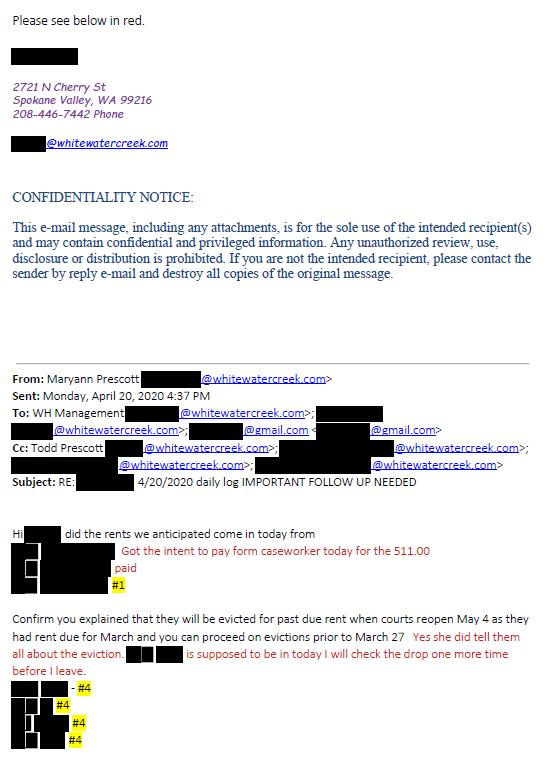 A Whitewater Creek manager threatened one resident, a single mother of young children, that she would be evicted the day courts reopened for eviction proceedings if she did not pay the full balance owed. When she attempted to contact Whitewater Creek’s corporate office to dispute the eviction threat and find out how much the legal fees would be, a manager threatened her that she would be “charged with harassment” if she did not stop calling. This resident expressed fear of retaliation for attempting to contest the eviction threat and also worried she would lose custody of her children if evicted.

Ferguson created the Wing Luke Civil Rights Division in 2015 to protect the rights of all Washingtonians by enforcing state and federal anti-discrimination laws. Ferguson named the division for Wing Luke, who served as an Assistant Attorney General for the State of Washington in the late 1950s and early 1960s. He went on to become the first person of color elected to the Seattle City Council and the first Asian-American elected to public office in the Pacific Northwest.

This is the second lawsuit Ferguson filed to enforce the eviction moratorium. The previous lawsuit against JRK Residential, a Nevada-based property management company with units in Tacoma, Silverdale and Marysville, resulted in a payment of nearly $350,000 — including almost $300,000 directly to tenants in the form of refunds, payments and rent forgiveness.

As of mid-January, here are some of the totals of the effort the Attorney General’s Office has put into protecting Washington’s renters:

Washingtonians who have questions about the governor’s eviction moratorium or who think their rights may have been violated can fill out the online form here.

Landlords who have questions about the eviction moratorium or their rights under the proclamation can contact the Attorney General’s Office here.

On March 18, 2020, the governor issued “Emergency Proclamation 20-19”, titled “Evictions,” to help preserve and maintain life, health, property or the public peace by prohibiting certain residential evictions and related actions statewide. Actions prohibited under the proclamation include serving 14-day notices to pay or vacate. An updated proclamation, issued on April 16, 2020, expressly prohibited threatening residents with eviction for non-payment of rent. The governor extended the moratorium several times during 2020 as the pandemic evolved.