State’s damages and costs to clean up PCBs could reach hundreds of millions of dollars, or more

OLYMPIA — Attorney General Bob Ferguson today announced that he has filed an environmental lawsuit against Monsanto in King County Superior Court. The lawsuit seeks damages and cleanup costs associated with the polychlorinated 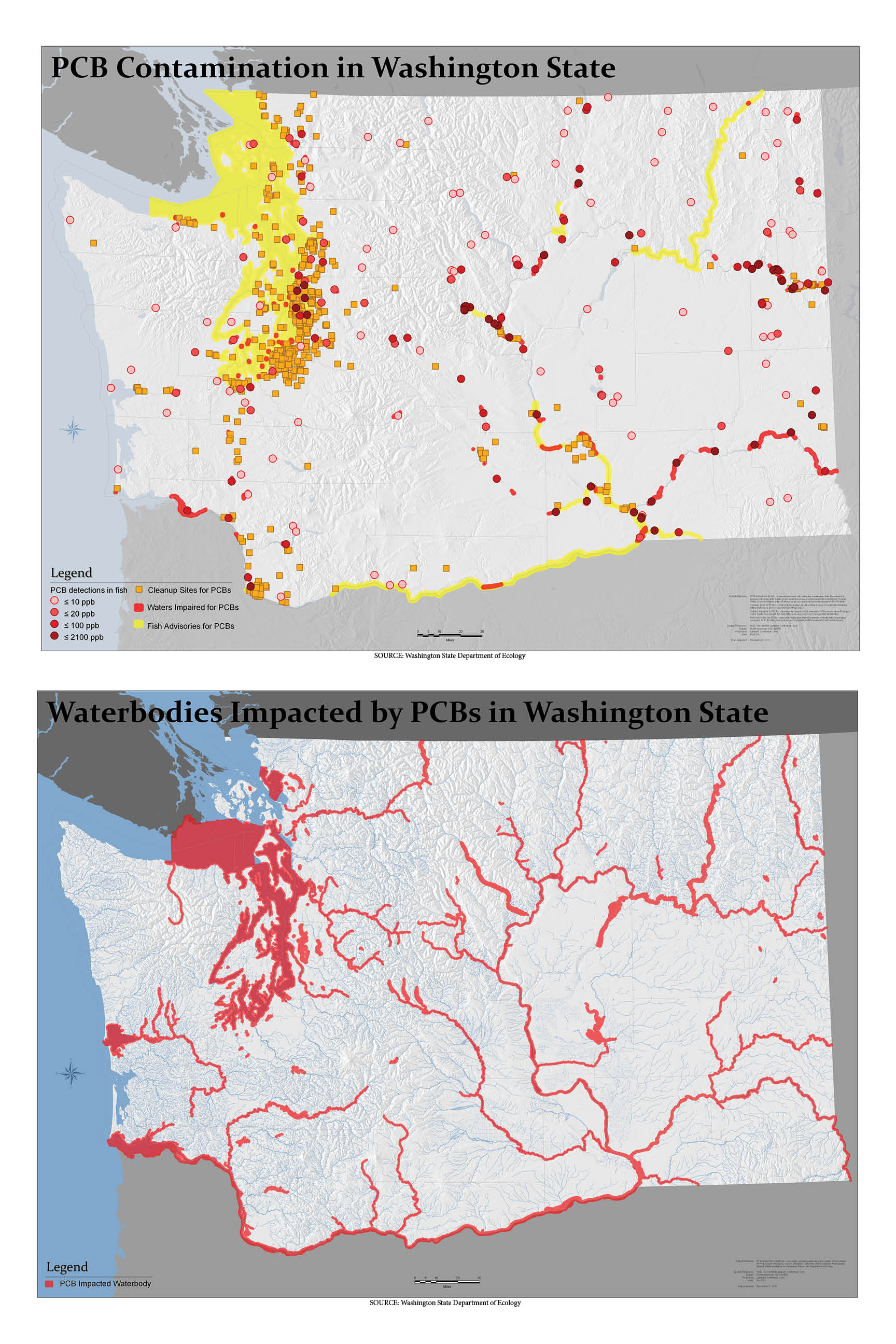 biphenyls (PCBs) Monsanto produced for decades while hiding what they knew about the toxic chemicals’ harm to human health and the environment.

Monsanto was the only U.S. company to produce PCBs from 1935 to 1977. Ferguson asserts that Monsanto knew these compounds were toxic to humans and wildlife and had spread throughout the ecosystem long before the ban took effect.

PCBs present a public nuisance “that is harmful to health and obstructs the free use of public resources and state waters,” the lawsuit alleges, due to Monsanto’s negligence and its efforts to conceal the dangers of its product.

PCBs have been found in bays, rivers, streams, sediment, soil and air throughout Washington state, with more than 600 suspected or confirmed contamination sites from Puget Sound to the Wenatchee River, Lake Spokane to Commencement Bay.

PCBs accumulate in the tissues of fish and other animals, including humans, leading the state Department of Health to issue multiple warnings about fish consumption from rivers, lakes and Puget Sound. Currently, there are 13 active fish consumption advisories related to PCBs, covering several stretches of the Columbia River, all 26,000 acres of Lake Washington, 21 miles of the Wenatchee River and more.

“Monsanto knew the dangers of PCBs yet hid them from the public to generate profits,” Ferguson said. “I will hold Monsanto accountable for its actions.”

“Monsanto is responsible for producing a chemical that is so widespread in our environment that it appears virtually everywhere we look — in our waterways, in people and in fish — at levels that can impact our health,” Gov. Jay Inslee said. “It’s time to hold them accountable for doing their fair share as we clean up hundreds of contaminated sites and waterways around the state.”

The lawsuit — against Monsanto and two of its splinter companies, Solutia Inc. and Pharmacia LLC — seeks compensation for damages to the state’s natural resources, including the economic impact to the state and its residents. It also asks the court to award present and future costs to address the “ongoing public nuisance” caused by PCBs. Damages could reach into the hundreds of millions of dollars or more.

PCBs, marketed and sold under the Monsanto brand name Aroclor, were used in many industrial and commercial applications, from paint and caulking to transformers, capacitors and coolants, among other uses. 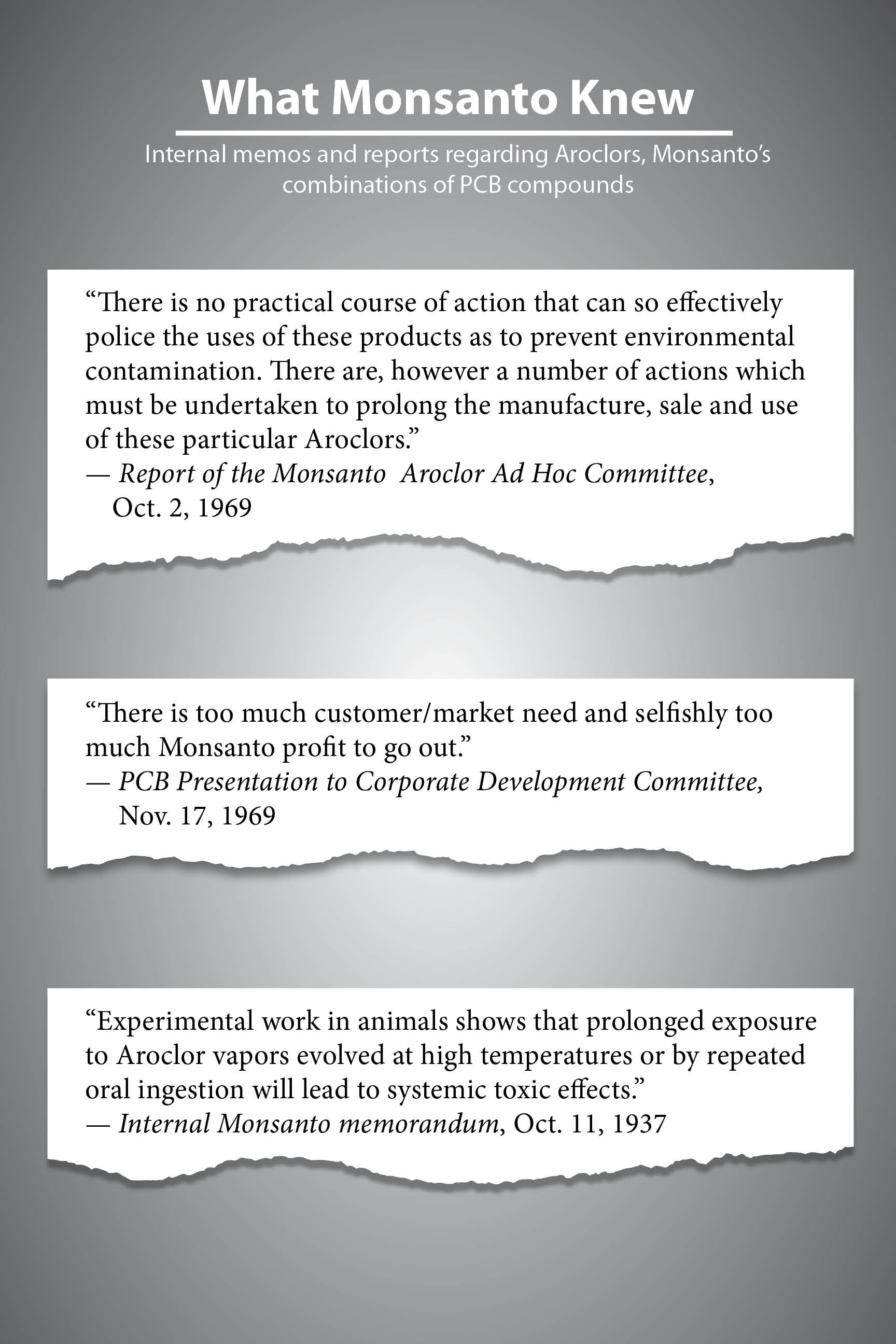 As early as 1937, internal Monsanto documents warned of “systemic toxic effects” from prolonged exposure to PCB vapors. By the late 1960s, Monsanto privately cited evidence of global PCB contamination but kept that information from the public. The company chose to conceal the toxicity and pervasive contamination of its chemicals in favor of profits, Ferguson’s complaint alleges.

“There is no practical course of action that can so effectively police the uses of these products as to prevent environmental contamination,” an ad hoc Monsanto committee on PCBs stated in a 1969 internal report. “There are, however a number of actions which must be undertaken to prolong the manufacture, sale and use of these particular Aroclors.”

Another internal report bluntly stated that “there is too much customer/market need and selfishly too much Monsanto profit to go out” to cease PCB production, despite the dangers. Monsanto continued to produce PCBs for another 10 years after articulating that conclusion.

Seattle and Spokane have pending lawsuits against Monsanto over the costs associated with PCB contamination in water treatment, joining Portland and several California cities. The state’s claims are separate from the cities’ and cover much broader ground. The state’s lawsuit does not impede Seattle’s and Spokane’s ability to recover the damages sought in their court actions.

Attorneys from the firms Baron & Budd and Gomez Trial Attorneys, under the direction and oversight of the Attorney General’s Counsel for Environmental Protection, will represent the state in the litigation. The law firms will shoulder the costs of the complex and potentially lengthy case, receiving reimbursement only after a successful result. The firms — which are involved in similar actions against Monsanto, including the Seattle and Spokane lawsuits — will receive a portion of damages to be awarded to the state in the event of a favorable outcome.

Washington’s contractual arrangement with outside law firms is similar to the state’s approach during lengthy multi-state litigation against big tobacco companies, which garnered a record $206 billion national settlement, split among the states. To date, that settlement has garnered nearly $2 billion for Washington, which continues to receive payments each year.

Attorney General Ferguson recently created the Counsel for Environmental Protection, led by Assistant Attorney General Bill Sherman, to protect our environment and the safety and health of all Washingtonians.