Lawfully owed DNA is defined as a DNA sample from a qualifying criminal offender who should have their sample in the nationwide Combined DNA Index System (CODIS), but from whom a sample has never been collected or submitted to a lab for testing. Washington law requires all currently registered sex and kidnapping offenders to provide DNA samples. Some fail to comply with this part of their sentence.

As of today, the Attorney General’s lawfully owed DNA project has resulted in 345 of the 635 registered sex offenders providing DNA samples to law enforcement.

Local law enforcement agencies working with Ferguson’s office determined that they could not collect samples from 225 of the 635 sex offenders who failed to provide samples. Of these 225 offenders, 107 died or left the state. Ninety-eight failed to register as sex offenders and their whereabouts are unknown. The remaining 20 are uncollectable for a variety of different reasons

DNA profiles from 65 sex offenders currently registered in four Washington counties (Clark, Columbia, Snohomish and Stevens) remain uncollected, according to the Washington State Patrol’s sex offender registry. If they move, they are obligated to register at their new address. County sheriffs monitor registered sex offenders in their jurisdiction.

Ferguson launched the lawfully owed DNA project in October 2019. The project is a partnership with the U.S. Department of Justice and local law enforcement aimed at identifying and collecting court-ordered DNA samples. Collected samples are entered into CODIS, the nationwide DNA database, where they can be used to help identify the perpetrators of unsolved rapes, murders and other crimes. Ferguson has prioritized these resources on offenders convicted of sex offenses and violent crimes, and individuals currently under supervision by the Department of Corrections.

“This work must be done,” Ferguson said. “This project will help solve unsolved cold cases and bring justice to survivors of sexual assault, rape, and other violent crimes.” 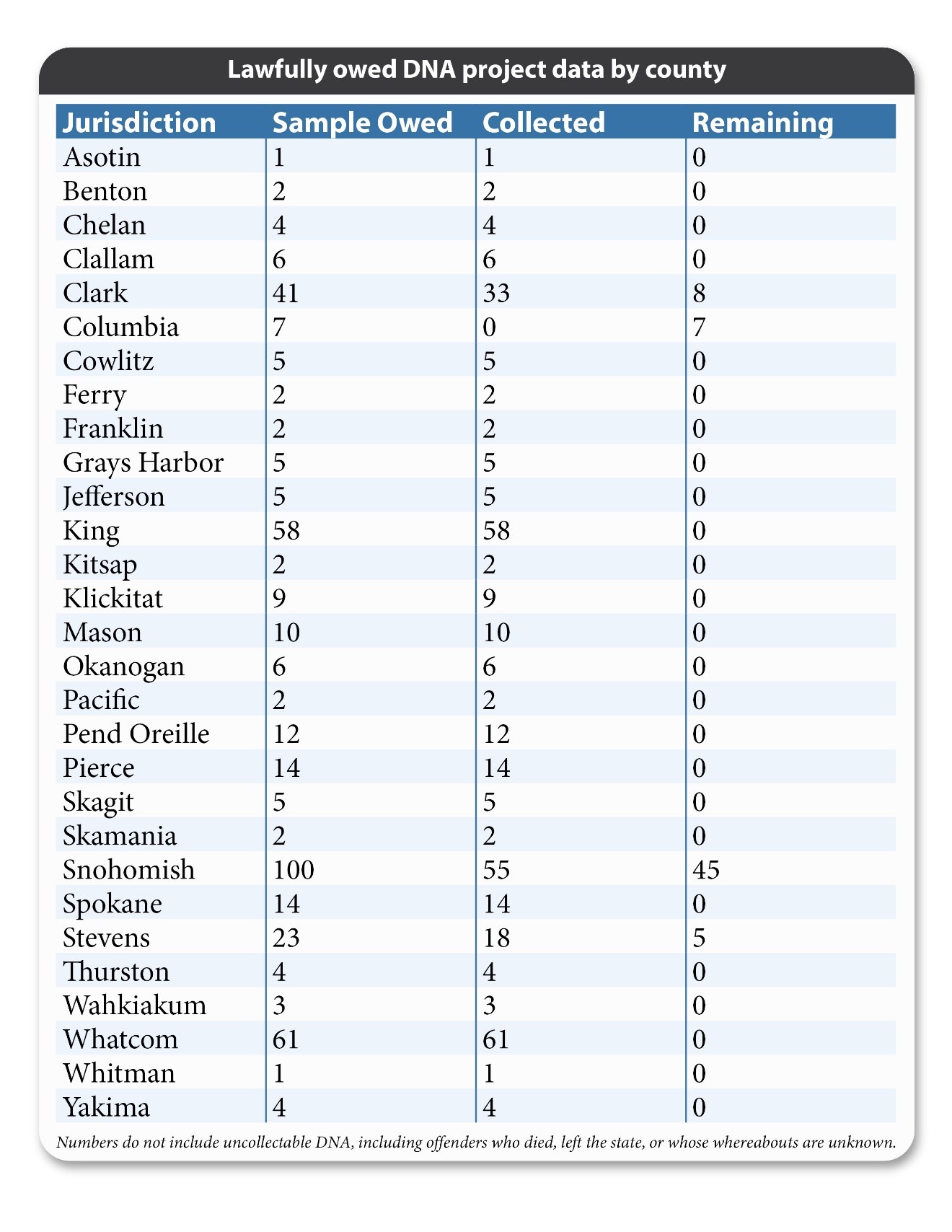 Every state requires individuals convicted of certain crimes, including violent crimes and sex offenses, to submit their DNA profile to CODIS, the nationwide database. Courts order individuals to submit their DNA as a condition of their sentence. Jails, correctional facilities and local law enforcement are responsible for collecting the samples and submitting them to the Washington State Patrol Crime Lab. The Crime Lab enters the DNA profiles into CODIS.

Investigators and prosecutors rely on samples in CODIS to help solve cases and bring justice to victims. When DNA is collected at a crime scene, it is tested by the Crime Lab and checked against the CODIS database. Sometimes the DNA profile that was collected as evidence matches a profile in the CODIS database, which is called a “hit.” These new “hits” can help identify serial rapists, link cases across the country, shed new light on cold cases and provide answers to crime victims and their families. DNA evidence can also exonerate individuals who have been wrongfully convicted. Thus, collecting lawfully owed DNA from qualifying offenders contributes to a comprehensive approach to addressing sexual assault reform.

Background on the project

In October 2019, Ferguson announced that his office successfully won a grant from the Bureau of Justice to pursue lawfully owed DNA as part of his initiative to help the state clear its backlog of sexual assault kits and bring justice to survivors.

Washington state has not developed a consistent method for collecting DNA upon conviction. Instead, every county implements different procedures.

By the end of the year, Ferguson’s office will announce another update on the project’s efforts collecting DNA for all violent offenders who lawfully owe DNA.