The conspiracy harmed an estimated 90 percent of Washingtonians, or approximately 7 million individuals. Consequently, the scheme impacted virtually everyone who consumes chicken products.

Tyson Foods is the largest chicken producer in the U.S., with approximately 20% of the national market share for broiler chickens. The Attorney General’s Office asserts Tyson Foods and 18 other chicken producers drove up the price of chicken since at least 2008, causing consumers to overpay by millions of dollars. The lawsuit asserts a widespread illegal conspiracy to inflate and manipulate prices, rig contract bids, illegally exchange information and coordinate industry supply reductions to maximize profits. Ferguson filed the lawsuit in King County Superior Court in October 2021.

“These corporate executives make more money than most Washingtonians can imagine, yet they decided to cheat those hardworking Washington families in order to satisfy their greed,” Ferguson said. “We will do everything in our power to make Washingtonians whole for the harm done to them by this price-rigging conspiracy.”

As part of the court order, Tyson Foods will cooperate with the Attorney General’s Office to produce information and documentation relevant to the case against the other co-conspirators. Moreover, the company entered into a legally binding agreement to conduct internal training and certify that it has corporate policies that ensure the company follows state and federal antitrust laws. Under the terms of the consent decree, if Tyson Foods engages in price-fixing or other anticompetitive conduct in the next five years, the Attorney General’s Office can go to court to seek further civil penalties.

Two other states, Alaska and New Mexico, have similar antitrust cases against national chicken producers. Washington is the first state to hold these companies accountable.

Ferguson’s office is working on a plan to distribute these recoveries to assist Washingtonians harmed by the price-rigging conspiracy.

The 19 broiler chicken producers named in Ferguson’s lawsuit account for approximately 95 percent of the “broiler” chickens sold in the United States — a term for virtually all chicken produced for consumption. Broiler chickens are used for everything from chicken breasts consumers purchase at the grocery store, to chicken nuggets and chicken sandwiches individuals buy at fast food restaurants.

These 16 remaining companies that have not resolved their cases represent the majority of the broiler chickens sales nationally and in Washington state.

The remaining chicken producers named in the lawsuit are: 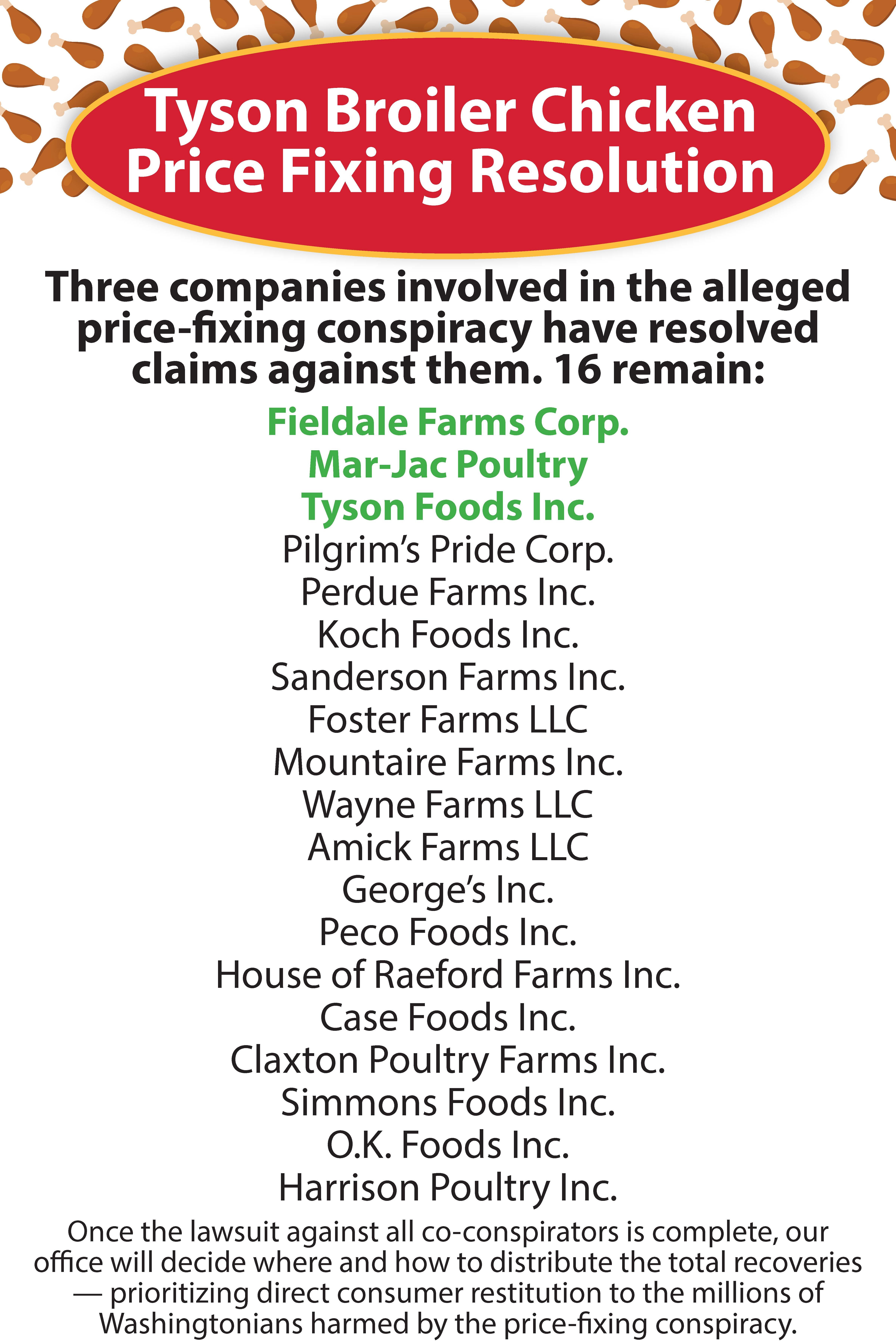 An estimated 90 percent of Washingtonians buy products derived from the chickens these companies produce. In addition, the companies’ illegal conduct reached into Washington businesses, colleges, hospitals and nursing homes.

The lawsuit asserts the companies illegally engaged in a host of anticompetitive conduct to coordinate supply and manipulate pricing of broiler chickens since at least 2008. Ferguson asserts their conduct violated the Washington Consumer Protection Act’s antitrust provisions, and caused consumers and businesses to overpay millions of dollars for their chicken products.

The Attorney General’s Office investigation found a coordinated, industry-wide effort to cut production through the exchange of competitively sensitive information, signals during investor calls and direct coordination between players in the industry.

As an example of the conduct, a former Tyson Foods sales representative admitted that he colluded with employees from three other chicken producers to make a “substantial pricing increase” in the products they all sold to Kentucky Fried Chicken, Popeye’s and Boston Market. The restaurants did not know about the price-fixing conspiracy among the producers. The producers colluded down to the tenth of a penny per pound of chicken to ensure their bulk meat brought each company the most profit.

The Attorney General’s Office Antitrust Division is responsible for enforcing the antitrust provisions of Washington's Consumer Protection Act and federal antitrust laws. The division investigates and litigates complaints of anticompetitive conduct and reviews potentially anticompetitive mergers. The division also brings actions in state and federal courts to enforce antitrust laws. It receives no general fund support, funding its own actions through recoveries made in other cases.

For information on filing a complaint regarding potential anticompetitive activity, visit https://fortress.wa.gov/atg/formhandler/ago/AntitrustComplaint.aspx.