SEATTLE — Attorney General Bob Ferguson today announced that eight additional corporate, fast-food chains will end no-poach practices nationwide, joining 15 others. The 23 account for more than 67,000 locations nationwide and employ millions of workers. The companies will remove all no-poach clauses, which put downward pressure on wages and restrict worker mobility, from all current and future franchise contracts.

Popeyes, Tim Hortons and Wingstop ― will remove no-poach language from current and future contracts, and no longer enforce no-poach provisions currently included in franchise agreements at more than 24,000 locations nationwide.

With this announcement, Ferguson is nearing his goal of eliminating no-poach clauses in the fast-food industry among corporate chains with a significant nationwide presence. Ferguson continues to investigate a handful of corporate chains, including Baskin Robbins, Domino’s, Quiznos, Firehouse Subs and Jersey Mike’s. If they refuse to enter into similar, legally-binding agreements to eliminate no-poach clauses, Ferguson will file enforcement actions. Ferguson’s investigation has not uncovered evidence of any other fast food chains in Washington state that use no-poach clauses.

“My goal is to eliminate no-poach clauses nationwide to benefit workers,” said Ferguson. “No-poach provisions create a rigged system where businesses no longer have to compete for workers, putting downward pressure on wages nationwide. That’s wrong — and illegal.”

The fast-food companies are legally bound to immediately stop enforcing no-poach clauses and stop adding the language to new franchise contracts. To ensure these changes occur nationwide, the companies must notify all franchisees, or independent franchise owners, of the requirements.

Papa John’s and Pizza Hut previously discontinued no-poach practices within the last year. A&W ended its practices shortly after the Attorney General’s investigation began. These legally binding agreements announced today ensure that all of these companies are legally bound to end the practice in all current and future franchise agreements. These eight corporate chains must now proactively remove no-poach clauses in contracts with Washington franchise locations.

Ferguson continues to investigate other corporate chains that utilize no-poach agreements in industries other than fast food, including:

Because employees cannot move to another location within their corporate brand, their current location has less incentive to give them raises.

A September 2017 article in the New York Times titled “Why Aren’t Paychecks Growing? A Burger-Joint Clause Offers a Clue,” focused on the downward pressure no-poach agreements among fast-food franchises place on wages. After reading the article, Solicitor General Noah Purcell referred the subject to the Attorney General.

Early this year, Ferguson’s Antitrust Division launched an investigation into these so-called “no-poach” clauses in fast-food chains after research by Princeton economists Alan Krueger and Orley Ashenfelter pointed out the issues with the practice.

The economists believe that “no-poach” clauses reduce opportunities for low-wage workers and stagnate wages. Ferguson asserts that no-poach provisions harm workers in Washington and across the nation. Restricting competition, whether in the labor market or the burger market, violates the state Consumer Protection Act.

Beginning in January, the Attorney General’s Antitrust Division used the economists’ list to determine which fast-food companies used no-poach clauses and were present and employed people in Washington. Out of the original 31 the division identified, three chains ― Hissho Sushi, Long John Silver’s and Wendy’s ― did not use no-poach provisions in their franchise contracts. In addition to the eight companies announced today, Ferguson negotiated an end to no-poach provisions with seven fast-food chains in July and eight more in August. 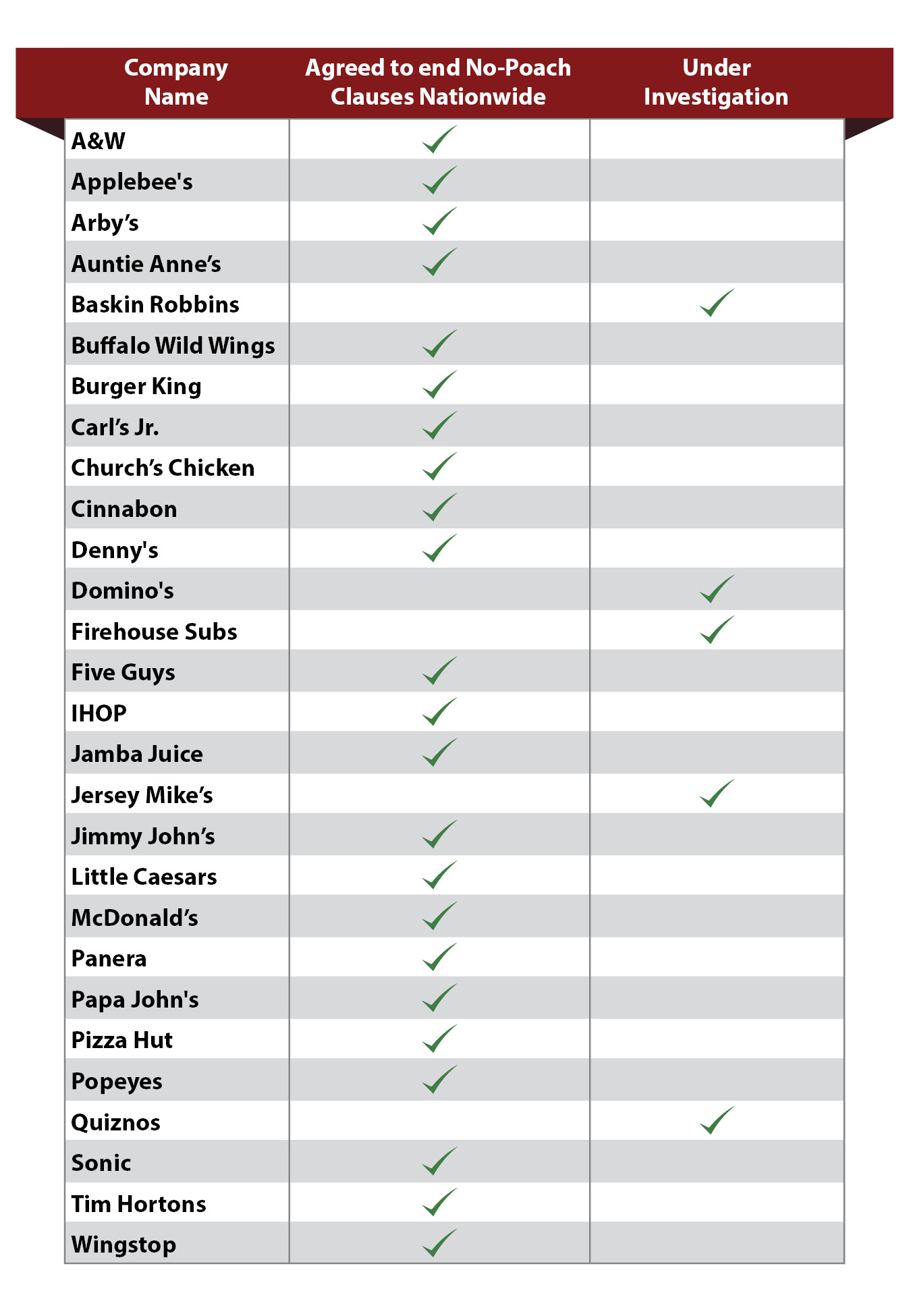 Ferguson is expanding his investigation to cover fast-food chains with fewer than 500 stores nationwide.

In addition, Ferguson has since expanded his investigation beyond the fast-food chains to other franchise chains operating in Washington.