SEATTLE — Attorney General Bob Ferguson today filed a lawsuit against a Seattle business and its owner for preying on new immigrants by making deceptive promises to help them with legal assistance for immigration needs then later abandoning them in courtrooms after charging thousands of dollars.

Ana Caroline Pinto do Nascimento, who owns ACN & Associates, LLC, targets Portuguese-speaking immigrants from Brazil. Nascimento is not a licensed attorney in Washington state nor does she have an educational background in the law. According to consumer complaints, Nascimento tells families she will represent them in immigration courts, but she has never appeared in any courts because she is not an attorney. When families ask for their money back, Nascimento refuses or delays.

In one complaint, an English-speaking acquaintance of one of Nascimento’s clients wrote, “What is particularly obscene about this abuse of a helpless single mother seeking safety in the US, is that refusing to return the funds is actually preventing [her] from moving forward with competent legal representation … she could be deported because of this fraud/theft.”

Ferguson is seeking civil penalties and restitution for the families who paid Nascimento and her business money. Additionally, Ferguson seeks a preliminary injunction from the court to immediately stop the illegal conduct. The lawsuit is filed in King County Superior Court.

“Ana Nascimento preys on immigrants’ hopes to find asylum or work in our state then abandons them when they need her most — when they’re standing before an immigration judge,” Ferguson said.  “She deprived dozens of families of a qualified advocate, and cheated them out of their hard-earned money. My team will prosecute immigration scammers exploiting families who simply want to live and work in Washington state.”

If you believe you have been a victim of immigration services fraud from Nascimento’s business or any other immigration agency, file a complaint with the Attorney General’s Office online or call 1-800-551-4636 between 10 a.m. and 3 p.m. on weekdays.

Ferguson asserts that Nascimento’s conduct violates the Immigration Services Fraud Prevention Act because she is not a licensed attorney in Washington state, yet plainly advertises offers for immigration law services. Moreover, she does not have any accreditations to represent individuals or their families in any immigration court.

Ferguson also asserts Nascimento, and her business, violate the Consumer Protection Act (CPA) by unlawfully marketing and selling legal services in a deceptive manner. Her website once advertised the business as “expertise you can rely on” that offered “immigration law you can understand.” 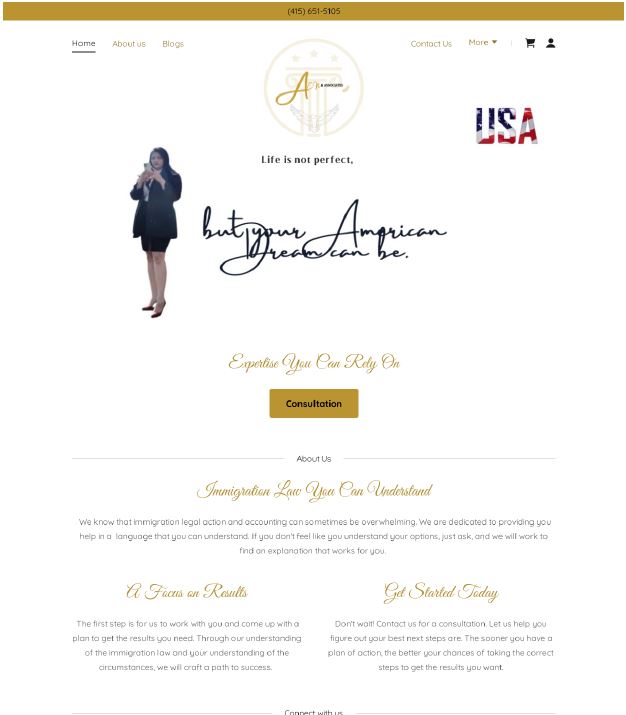 Nascimento continues to operate her business despite receiving a cease and desist notice in April from the U.S. Department of Justice’s Executive Office of Immigration Review. She changed her website from English to Portuguese after receiving the letter.

Ferguson is seeking restitution for the families who gave her money and for a court to stop Nascimento and her business’s unlawful conduct.

In a motion for preliminary injunction filed with the lawsuit, the Attorney General’s Office included examples of Nascimento’s and ACN's business practices based on text messages individuals sent to Nascimento or members of her staff.

For example, in early March, a Brazilian man seeking asylum in Seattle sought representation for asylum cases for himself, his partner and their 9-year-old son. They left Brazil seeking safety after their landlord threatened and imposed a curfew on them in their home. They had a hearing in immigration court on March 29 and he wanted assurances that an attorney would represent him and his family. Nascimento provided those assurances but on the date of the hearing no one showed up.

The man called her and sent messages from a courtroom multiple times asking where his attorney was.

“I'm here in court now, and I was supposed to have a lawyer here today. My God! I feel lost! I've already paid you $500. How do I get my money back?? Because I have to get another lawyer urgently. If not, they will deport me,” the man wrote in a text to Nascimento’s assistant.

“When we started your proceedings, Dr. Ana was a lawyer. Now, she is no longer a lawyer, but a paralegal,” the assistant wrote back.

A judge told the man that no one had filed any documents for his case.

After speaking with Nascimento later, she assured the man that what happened was a mistake and she would arrange an attorney for his next hearing. Three weeks before the hearing in May, Nascimento’s assistant gave the man a name of an attorney, but on the morning of his hearing, he was told that it would be someone else. Ultimately, an immigration judge told the man he would not permit the attorney into the courtroom because of the association with Nascimento. The man had paid Nascimento $3,000 for representation.

In January, another Brazilian man seeking a work permit contacted Nascimento to request representation for him, his wife and their infant son. They traveled to the United States to temporarily care for an elderly relative, with their infant son in tow. Nascimento said she could represent them and would personally appear at their court hearings. The man asked Nascimento about potential risks and the strength of the case. Nascimento’s only response was that there was no way an immigration judge would deny his requests.

On the day of their first hearing, the man could not locate Nascimento in court so he called and messaged Nascimento. “I stood there like a fool, not knowing what to say. The judge asked me your name. It was like I didn't have a lawyer to represent me, like I was alone,” he wrote.

Again, Nascimento offered excuses and assurances that she and her staff were working on his application and would have an attorney at his next hearing. The man referred to her as “Dr. Ana,” which is an honorific for attorneys in Brazil. At no point did Nascimento correct him and in fact Nascimento’s own staff referred to her as Dr. Ana in communications with consumers.

In June, as the man was preparing for his next hearing, Nascimento noted he would have a different attorney. Two days later, Nascimento’s assistant informed the man that she had cancelled his contract with her business and he would get a refund. The man asked to speak with Nascimento directly but she never responded.

In July, the man had not received his refund and Nascimento promised that it was still processing.

Immigration services, or “notario,” fraud is illegal under Washington state’s Immigration Services Fraud Prevention Act. Signed into law in 2011 at the request of the Attorney General’s Office, the law protects consumers from unauthorized entities that peddle assistance completing immigration forms and navigating immigration processes that legally only qualified attorneys and accredited representatives can provide.

These unlicensed immigration “consultants” are often notaries public who prey on immigrant clients by referring to themselves as “notarios” or “notarios públicos,” terms that refer to attorneys or individuals with advanced legal training in Latin American countries.

The law specifically prohibits the use in advertising of these and any other deceptive terms that imply professional legal skills in the area of immigration law.

Signs that it may be an immigration scam

Washington’s consumer protection laws protect everyone who lives in our state. The Attorney General’s Office is here to help all consumers. We will not ask about your immigration status.

Notify the Attorney General’s Office if you were in contact with someone who:

Do not agree to pay anyone for legal advice or assistance in an immigration matter until you confirm that he or she is a licensed attorney or federally accredited representative authorized to provide such services.