SEATTLE — Attorney General Bob Ferguson filed a lawsuit today to block the Trump Administration’s plan to “reprogram” funding for more than $3.6 billion in congressionally approved military construction projects to help build a wall along the U.S. southern border with Mexico. The plan diverts nearly $89 million from the Kitsap Peninsula’s Bangor submarine base.

Ferguson filed the lawsuit in the U.S. District Court for the Western District of Washington. Ferguson also intends to ask the court for injunctive relief in the near future to immediately block the Administration’s attempt to divert the congressionally appropriated funds.

“President Trump’s misuse of his presidential emergency powers to accomplish an ideological political goal is an egregious abuse of power that should concern all Americans, regardless of how you feel about Donald Trump or immigration,” Ferguson said. “Our nation’s founders enshrined our system of checks and balances in our Constitution. President Trump’s actions threaten to undermine that system. We will not allow that to happen.”

“The president’s actions demonstrate a clear disdain of Congressional authority and are a serious breach of constitutionally established powers,” Gov. Jay Inslee said. “The president promised that Mexico would pay for his vanity border project, but instead it is U.S. military members, their families and their communities who are paying for it. I support Attorney General Ferguson’s actions and I stand with him on this, as I have with every other lawsuit his office has filed, and won against this president.”

In February, President Trump declared a “national emergency” to reallocate funds for his long-promised border wall despite the fact that Congress has repeatedly refused to approve the funding he requested.

Senator Lamar Alexander (R-TN) said: “We had a war against a king in the American revolution. This would be the first time that a president has ever asked for a certain amount of money from Congress, Congress has refused to provide it, and then the president has declared a national emergency under the 1976 act and said, 'I'm going to spend the money anyway.'”

Earlier this month — seven months after the “emergency” declaration —  the Trump Administration identified specific military construction projects it is targeting to pay for wall construction along the southern border. Among the diverted funds are nearly $89 million for a much-needed new pier and maintenance facility at the Bangor submarine base on the Kitsap Peninsula.

Several lawsuits were filed earlier this year, including a lawsuit by 20 states, after the president’s declaration, but courts have yet to rule on the legality of “reprograming” military construction funds because the Administration had yet to detail which projects would lose funding. Ferguson decided to file his lawsuit after the Department of Defense confirmed a Washington project would lose funding. 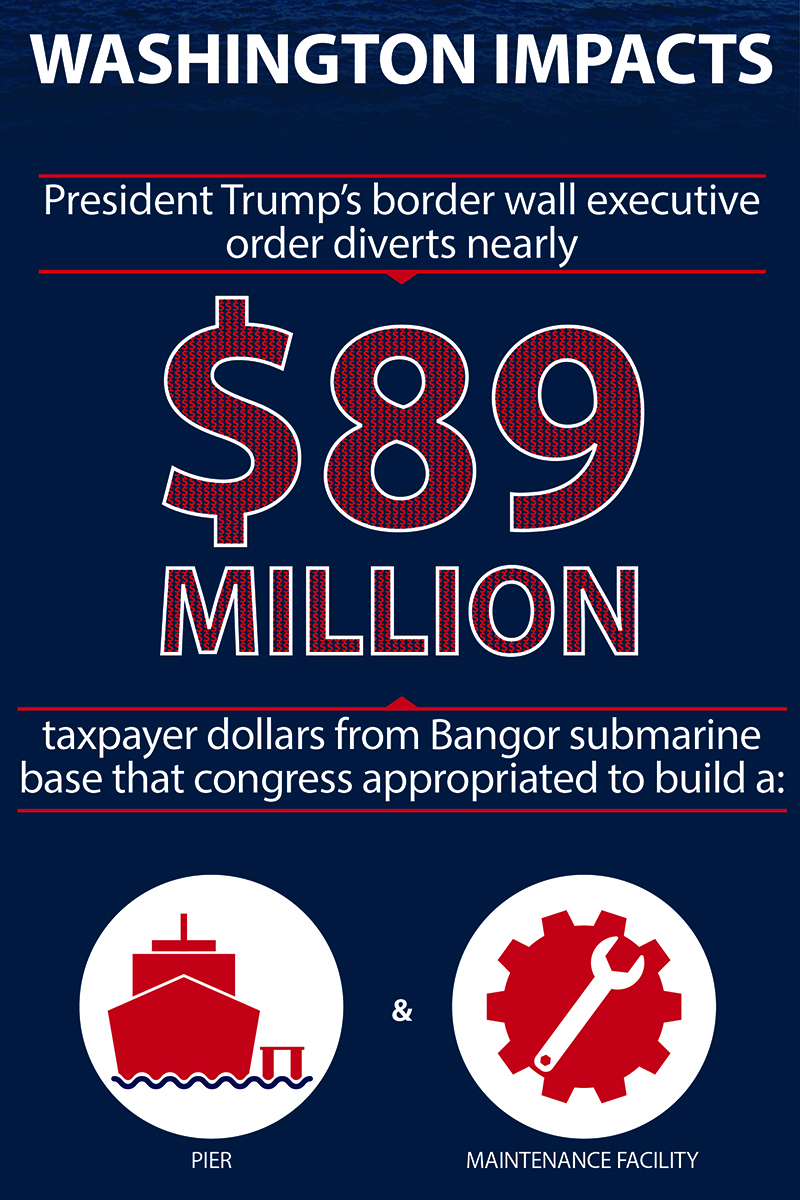 Washington’s Bangor submarine base is home to the U.S. Pacific Fleet of Trident ballistic missile submarines. The Trump Administration’s plan subverts a congressionally approved $88.96 million project to build a pier and maintenance facility at the base, complete with a boat shop, small-craft fueling station and storage tank, and permanent berthing for two 250-foot blocking vessels. The vessels, which escort and provide security for submarines between the base and dive points in the Strait of Juan de Fuca, currently have no dedicated pier space, forcing them to operate in a “nomadic state” according to the Department of Defense.

The Department of Defense also wrote about the Bangor pier project’s importance to military readiness, asserting that if the Bangor pier project is not funded, “full operational capability of the [transit protection] mission cannot be executed. [Nuclear Weapons Security] posture will continue to fall short of DoD directives and requirements.”

Additionally, a converted barge is currently providing diesel fuel at the facility, which was designed for temporary use, is costly to operate and carries serious environmental risks, according to the Department of Defense.

In his lawsuit, Ferguson asserts that President Trump violated Articles 1 and 2 of the U.S. Constitution with his the President’s declaration and subsequent diversion of congressionally appropriated funding. The Constitution grants Congress the exclusive power to appropriate federal funds. President Trump’s “emergency” declaration and seizure of military construction funds constitutes an unconstitutional abuse of power and a violation of separation of powers.

Ferguson also asserts that President Trump’s diversion of military construction projects runs afoul of the plain language of the law.

Ferguson additionally alleges that President Trump’s “emergency” declaration violates the statute granting him the power to declare emergencies, and thereby access certain emergency powers, because the president has the authority to declare a national emergency, as the Senate put it, “only when emergencies actually exist.” For sake of comparison, only two other domestic incidents have been declared national emergencies: the H1N1 flu pandemic, and the September 11th terrorist attacks.

The president’s emergency declaration was a bad-faith, pretextual effort to circumvent Congress and seize funds that they refused to appropriate. The president admitted as much in the press conference announcing the “emergency” declaration when he said, “I want to do it faster. I could do the wall over a longer period of time. I didn’t need to do this. But I’d rather do it much faster.”

The president’s decision to wait seven months to actually specify where the funding is coming from also undermines the case that an emergency actually exists.

Lawsuits against the Trump Administration