Senior management knew: “I’m afraid this is going to backfire on us if we are not very careful very soon.”

The lawsuit also alleges that St. Joseph senior management were aware of the problems and did nothing.

The law requires hospitals to provide notice of charity care availability and screen patients for eligibility. It also limits the amount of documents patients can be required to provide as proof of their income.

At St. Joseph, former employees reported they were told to “never volunteer information about St. Joseph’s charity care program to patients, even if they were obviously low-income or homeless.” The Attorney General’s Office investigation also revealed supervisors directed staff to provide patients with charity care applications only when a patient specifically requested one, often after aggressively seeking payment.

The Sisters of St. Francis of Philadelphia founded St. Joseph Hospital in 1891. According to St. Joseph’s website, the sisters “ministered to all people, regardless of race, religion or financial status.” The hospital’s stated vision is to “lead the transformation of healthcare to achieve optimal health and wellbeing for the individuals and communities we serve, especially those who are poor and vulnerable.”

In a press release marking the facility’s 125th anniversary last year, St. Joseph stated that care for the poor and vulnerable is primary to its mission. “What remains constant is the hospital’s dedication to compassionate care and service to the poor.” 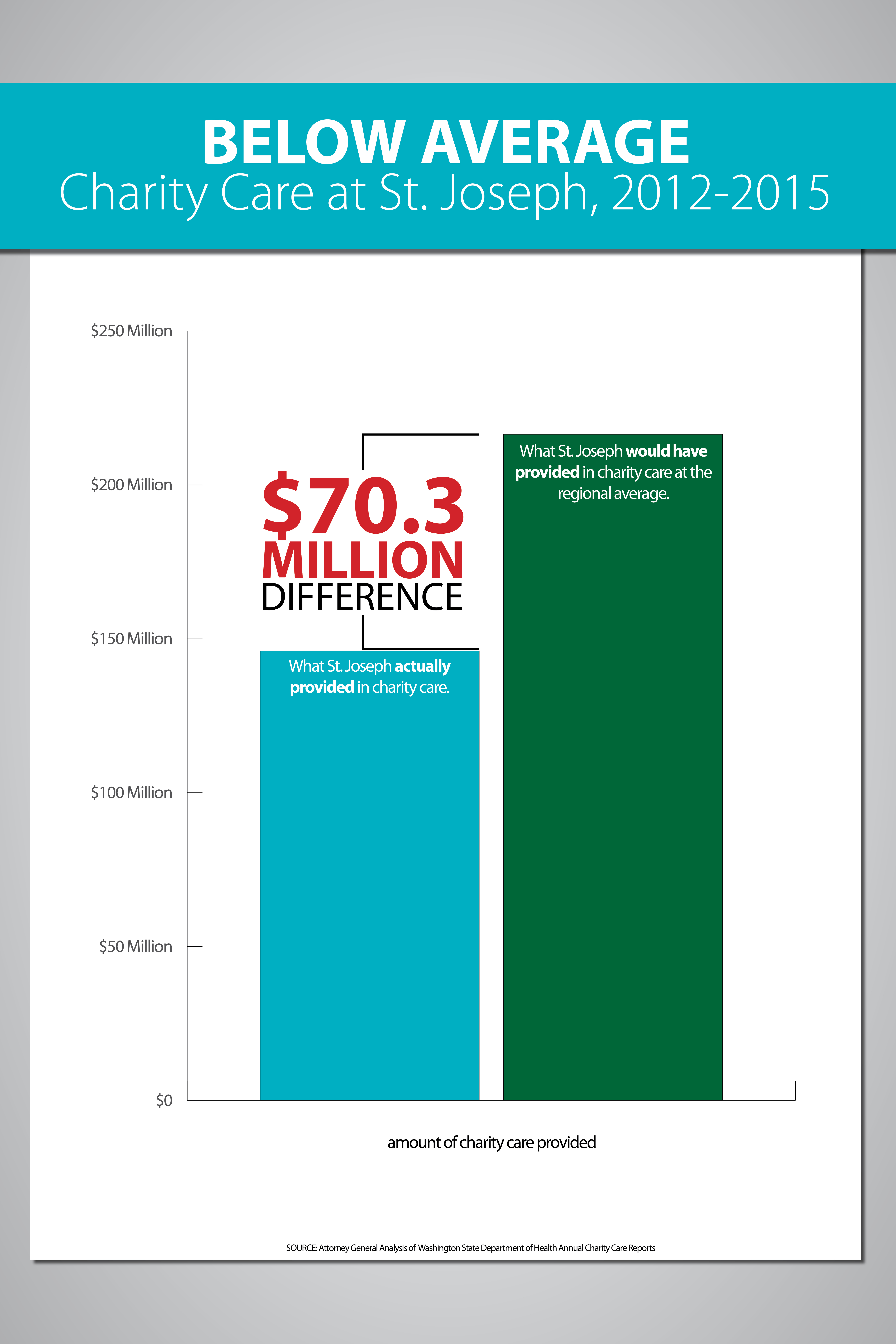 “It happens on a regular basis”

State law requires hospitals to provide charity care to individuals who are near the federal poverty level to ensure that everyone has access to affordable health care, regardless of income. Hospitals are required to:

In the lawsuit, filed today in Pierce County Superior Court, Ferguson alleges that St. Joseph violated all of these requirements. It allowed its revenue management contractor, Conifer Health Solutions, to train and encourage staff to demand upfront payment from patients while concealing their right to apply for charity care for their medical expenses.

Employees were trained to use language designed to give patients the impression that they were required to pay for their treatment upfront, forcing patients who may have been eligible for charity care to pay deposits of $250 or more prior to treatment, and incur large medical bills.

For example, a 2015 “user guide” from Conifer directed employees to “avoid phrases that give patients the option to not pay.” 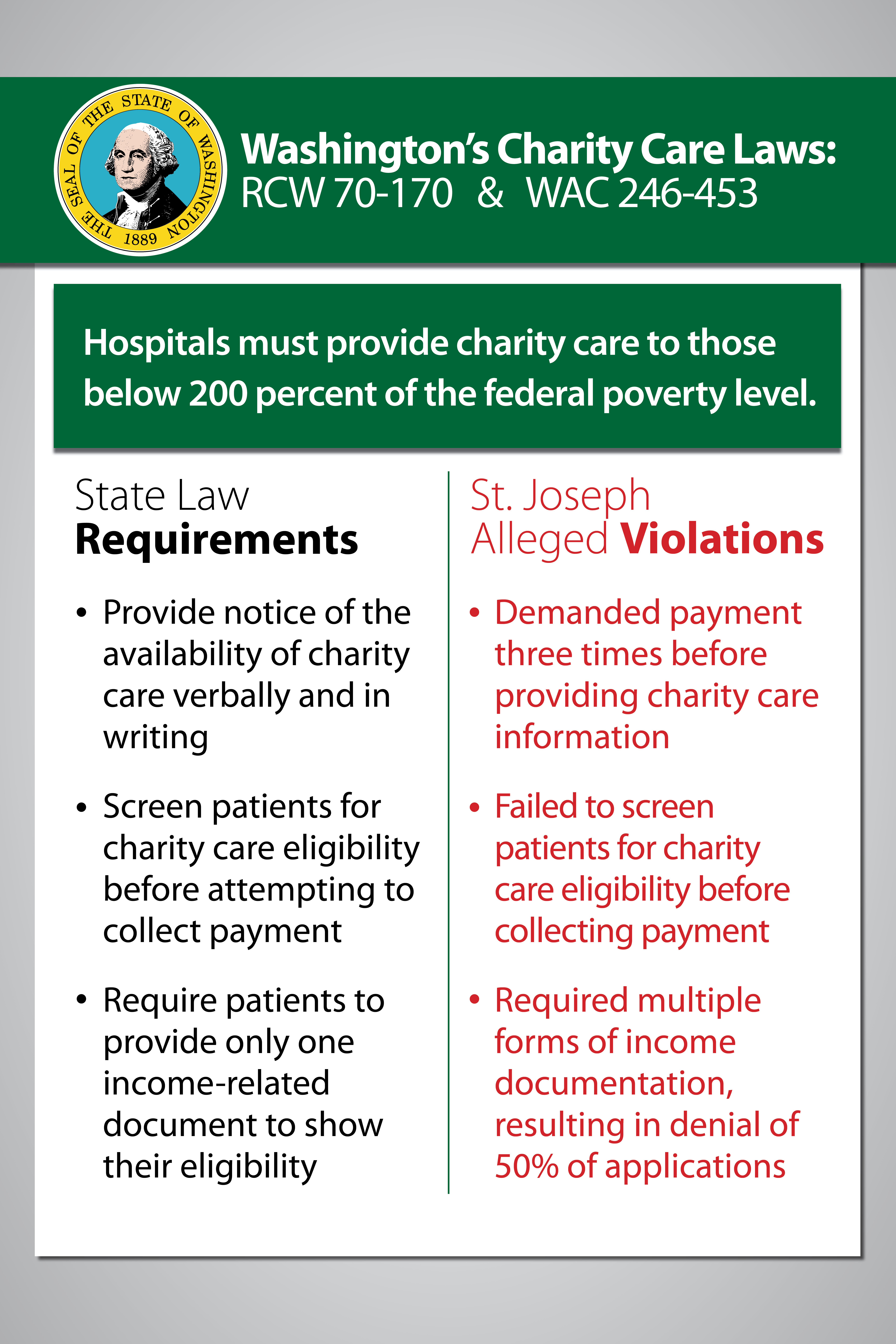 A former employee told Attorney General’s Office investigators that she was trained to “encourage patients to pay the deposit by indicating that I could only provide them with a charity care application if they paid a deposit first.” This violates the law’s requirement that patients are screened for charity care eligibility before attempting to collect payment.

As early as 2014, St. Joseph senior management was aware of complaints about aggressive collection practices. In September of that year, St. Joseph’s human resources director sent an email to a senior vice president and the president of the hospital relaying a staff member’s concerns that complaints would not be properly dealt with.

The staffer reported she received “at least one patient complaint daily about our billing/collection practices” and that she “feels badly because she doesn’t think they are being adequately taken care of.”

The complaints included a patient who said that St. Joseph’s demand for a large upfront payment made him reconsider whether to have heart surgery.

Another complaint came from one of St. Joseph’s own employees, who had difficulty accessing charity care for her own medical bills.

The employee was assured her accounts were on hold while her charity care application was being processed, but then was served with a debt collection lawsuit over the accounts.

“This is terrible news from a very credible employee,” the senior VP wrote when forwarding the September 2014 email, adding that similar complaints had been relayed by the labor union representing some St. Joseph employees. She noted the union “is telling us it happens on a regular basis.”

One of the recipients, St. Joseph’s chief financial officer, commented, “we probably need to shore up our processes. I’m afraid this is going to backfire on us if we are not very careful very soon.”

When patients were able to apply for charity care, St. Joseph required them to provide multiple income verification documents with their charity care applications to prove their eligibility. These documents included pay stubs, tax returns or tax withholding statements, and Medicaid or unemployment eligibility documents, among others. This violates state law, because only one document is required.

One of Conifer’s own directors described their document requirements as “rather extensive” in an email to company executives. The director explained that at least half of charity care applications were denied because patients did not meet the extensive documentation requirements.

The hospital’s practices allowed it to provide charity care at well below the regional average, providing potential benefits to its financial position. According to figures reported to the state Department of Health, between 2012 and 2015, St. Joseph consistently provided charity care at a much lower rate than the regional average, sometimes as much as 40 percent lower.

If St. Joseph had provided charity care at the regional average during the four-year span, it would have given out about $70 million more to its neediest patients.

Ferguson’s lawsuit seeks to ensure that St. Joseph Medical Center provides patients with notice of their charity care rights before payment is requested, properly screens them for charity care eligibility and ceases its aggressive collection practices. It also seeks restitution for low-income patients harmed by the hospital’s practices, in addition to civil penalties.

The state Consumer Protection Act allows for a civil penalty of up to $2,000 per individual violation. St. Joseph’s practices impacted tens of thousands of patients, impacting their access to affordable health care.