SEATTLE — Attorney General Bob Ferguson announced today the creation of a statewide Organized Retail Crime Theft Task Force. The Task Force will improve coordination and collaboration among law enforcement agencies to address these multi-jurisdictional crimes that endanger employees and cause significant economic harm to our state.

The task force will focus on sophisticated, organized crime rings that account for almost $70 billion in retail losses across the country.

The Task Force is the first of its kind in Washington. Nine other states have a task force dedicated to organized retail crime.

An analysis from the Retail Industry Leaders Association estimates Washington retailers lost $2.7 billion to organized retail crime in 2021. Federal crime statistics show that the value of items stolen from Washington retailers increased by 151 percent from 2019 to 2020.

The first Task Force meeting will be held on Thursday, July 7. The Attorney General has committed to convening quarterly meetings for at least a year.

“Coordination is key to combatting this growing, and sometimes dangerous problem,” Ferguson said. “These organized crimes cross jurisdictions and cause significant economic harm. I’m committed to working together with law enforcement and retail partners to help combat this significant and growing problem.”

Organized Retail Crime involves a group of individuals that steal products not for their own personal use, but to resell them for a profit. This do not include general retail crimes like petty theft, shoplifting or poverty-driven crimes.

According to the Department of Homeland Security, the thefts that the task force will focus on are often perpetrated by sophisticated criminal organizations, and can involve threats to store staff and the public.

Often, but not always, these stolen goods are then sold on online marketplaces.

Organized retail crime differs from burglary and larceny — such as shoplifting — in that it is not the result of a single individual breaking the law, but rather part of an organized scheme to defraud retailers or to steal products for resale elsewhere. Organized crime can result in intimidation and violence for employees in those stores. 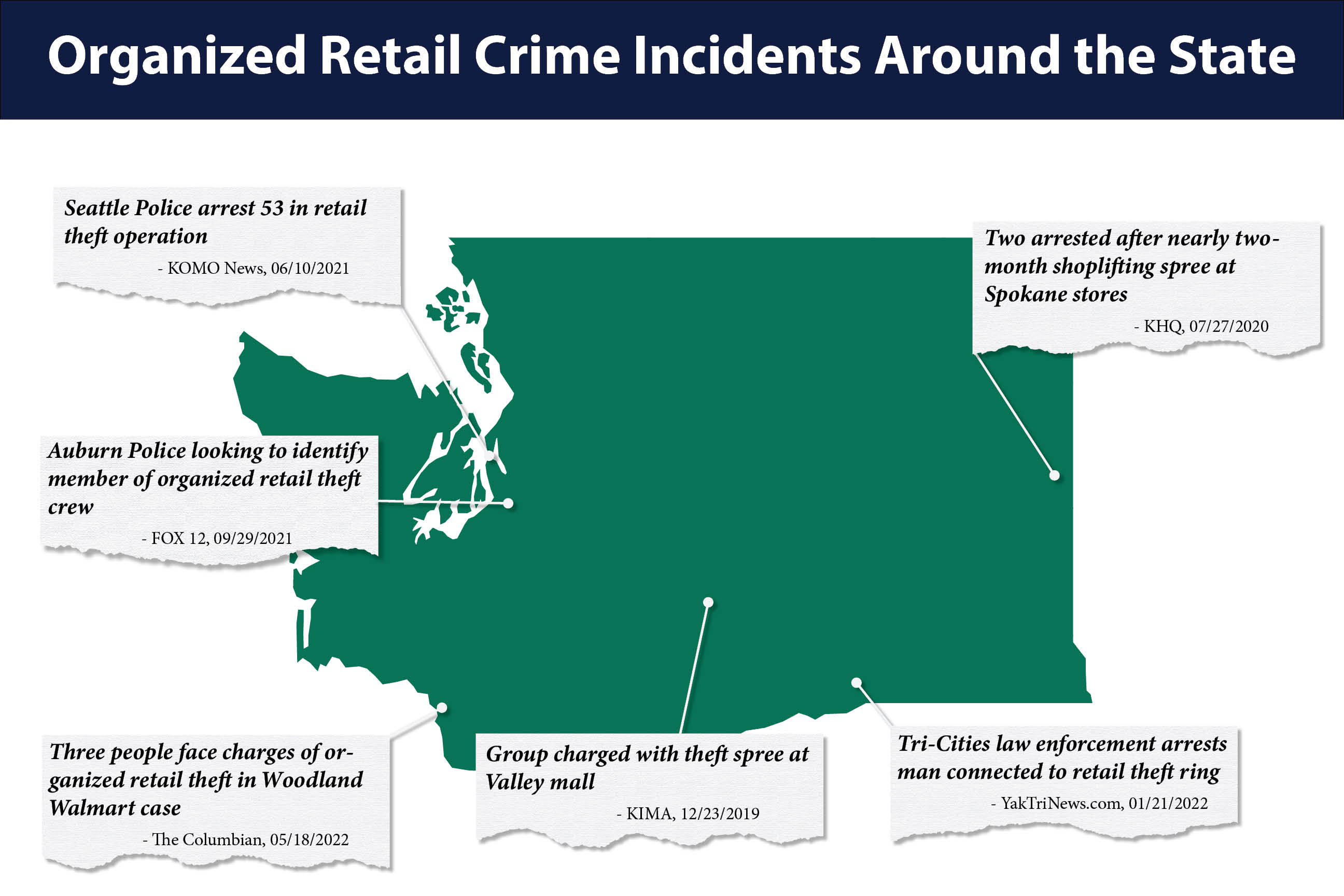 Even before the recent, well-publicized national shortage, baby formula accounted for 13 percent of the most-stolen items from stores, according to the 2020 National Retail Foundation Organized Retail Crime survey. The stolen formula then can appear for sale on online marketplaces.

Parents who buy stolen formula on the secondary market may be putting their babies at significant risk if the thieves failed to store it at the appropriate temperature. Additionally, thieves may have manipulated the packaging, such as changing expiration dates.

Washington’s legal cannabis retailers provide another example. The state Liquor and Cannabis Board has reported more than marijuana retail store robberies through the first three months of this year.

These incidents can be dangerous and traumatic for employees. For example, in March, a suspect took an employee hostage before being fatally shot by the store’s security guard.

At a robbery in Bellevue, police pursued three suspects into a south Seattle neighborhood. Two suspects surrendered, but the third engaged in a standoff with police before opening fire and ultimately being killed by officers.

The task force will bring together prosecutors and retailers from across the state with local, state and federal law enforcement representatives, including the FBI and U.S. Attorneys Nick Brown and Vanessa Waldref. The Task Force will also include the Port of Seattle, small business representatives and workers’ representatives.