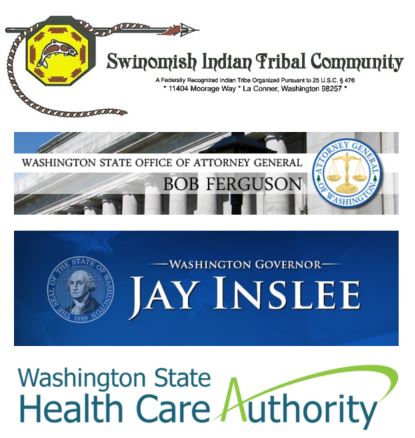 Dental Health Aide Therapists, or DHATs, help fill a void in tribal communities, many rural, which have a significant shortage of dentists and dental services. Native Americans experience untreated dental conditions at more than three times the rate of the United States’ general population.

The state and Swinomish jointly filed an appeal with the U.S. Court of Appeals for the Ninth Circuit after President Biden took office.  The state and Tribe also asked the Biden Administration to reverse the decision, but it defended the decision. Last week, the Ninth Circuit ordered the Centers for Medicare & Medicaid Services (CMS) to approve Medicaid funding for the dental therapists.

The decision to deny Medicaid funding, made by CMS, came on the last day of the Trump Administration and nearly a year after an independent federal hearings officer recommended the funding be approved. CMS previously approved Medicaid funding for a similar program in Alaska under the George W. Bush Administration.

Ferguson, on behalf of the Health Care Authority, and the Swinomish Tribe jointly filed their petition with the Ninth Circuit in March of 2021 asking the court to overturn the federal agency’s decision.

On Jan. 12, a three-judge panel with the Ninth Circuit agreed with the state and Swinomish that CMS’ denial was “not in accordance with law.” The court ordered CMS to approve the Medicaid funding for DHATs in Washington.

Once approved, the federal government will cover the entire cost of DHAT services for Medicaid patients in Washington. Currently, the state is covering all of the Medicaid costs out of its own budget.

In 2015, Swinomish became the first tribe in the country to establish its own dental health provider licensing law and regulatory system, which includes the licensing and regulation of dental therapists.

“We are very thankful for the decision of the Ninth Circuit Court of Appeals authorizing Federal Medicaid payments to Dental Therapists working in tribal dental programs,” said Steve Edwards, Chairman of the Swinomish Indian Tribal Community. “Dental Therapists are a Native solution to the unmet oral healthcare needs in Native communities. They provide culturally appropriate care to the patients and communities they serve, and they free up dentists’ time for the most complex conditions and procedures.”

“I want to thank the tribes, tribal leaders and tribal organizations who have worked with us for years to bring Dental Therapists to tribal health programs,” said Chairman Edwards. “I also want to express appreciation to our partners in the Washington Legislature, to the Governor and the Health Care Authority, and to the Attorney General’s Office for their support of Dental Therapists and their commitment to making Federal Medicaid available for their work. This has truly been a partnership of the tribes and state to address the oral health disparities in Native communities.”

Chairman Edwards added, “At the same time that we pursued approval of Medicaid in the Court of Appeals, we have worked with Skagit Valley College to create the dəxʷx̌ayəbus-Dental Therapy Education Program, the first Dental Therapy training program in the lower 48 states. This program has been accredited by the Commission on Dental Accreditation (CODA) and is beginning to train future Dental Therapists to help address oral health disparities. We look forward to further collaboration with the state to ensure the success of our dəxʷx̌ayəbus-Dental Therapy Education Program.”

“This successful case is a great example of building strong state-tribal relations,” Ferguson said. “I appreciate the leadership of the Swinomish Tribe. I will continue to partner with tribal governments in order to reduce health disparities.”

“This is very welcome news, and the result of tremendous efforts by Swinomish, AG and HCA,” said Gov. Jay Inslee. “This is a big step toward ensuring access to dental care, and for recognizing Tribal sovereignty.”

“This decision creates a space for tribal members to directly serve their communities,” said Aren Sparck, Director of the Office of Tribal Affairs at the Washington State Health Care Authority. “It highlights the importance of state and tribal health leaders partnering with each other to create change. This is one of the more promising developments we have seen in the country toward creating needed access for tribal communities disproportionally affected by health disparities.”

In 2017, Senate Bill 5079 authorized DHATs to provide dental services statewide on reservations. The bill also directed the state to pursue federal Medicaid funding for the services.

The bill, proposed by Tulalip Tribes member and then-Sen. John McCoy, passed with overwhelming bipartisan support in the Legislature and was signed into law by Gov. Inslee.

DHATs are professionally trained to perform about 40 oral health care and dental procedures in a culturally competent manner, ranging from preventative services like cleanings to simple extractions. They work under the supervision of dentists, who are trained in a much wider array of procedures. DHAT services increase tribal access to preventative dental care, allowing dentists to focus on more complex procedures. They also reduce wait times and off-reservation referrals that could require patients to travel long distances for care.

Washington’s DHAT program was modeled after the successful program in Alaska, which is widely used in tribal communities there. Alaska originally sent native villagers to New Zealand to train as DHATs before eventually creating its own training program.

After Swinomish created its own dental licensing program, the first tribal Dental Therapist outside Alaska began practicing at the Swinomish Dental Clinic in 2016. Swinomish subsequently sent several tribal members to Alaska to be trained, and has since developed a training program with Skagit Valley College which is more accessible to students in the lower 48 states.

After McCoy’s bill became law, HCA began the process with CMS to approve the use of federal Medicaid funding for DHATs for tribal communities.

CMS initially denied the request in May of 2018. HCA and the Swinomish Tribe asked the federal agency to reconsider its decision. A federal hearings officer conducted a day-long hearing in Seattle and in February 2020 agreed with the state agency and Swinomish that Medicaid funding could be used, and recommended approval.

After nearly a year of inaction, on the last day of the Trump Administration, the administrator of CMS disagreed with the hearings officer, and again denied the use of Medicaid funds for DHATs in Washington.

Last week’s ruling by the Ninth Circuit reverses that decision.