FedEx contractor fired employee when she asked for a pregnancy accommodation

TACOMA — A Tacoma judge has ordered over $41,000 in penalties and mandatory training for a FedEx contractor and its owner for firing a pregnant employee immediately after she asked for an accommodation. An accommodation is a reasonable change to the working environment to accommodate the pregnancy and the health conditions after the birth of the baby. The judge’s decision came in the first case brought to trial by the Attorney General’s Office under the 2017 “Healthy Starts Act.”

The case involved a woman, Sarai Alhasawi, who asked her manager for a specific, legally required accommodation during the initial stage of her pregnancy. Her manager denied her request and immediately fired her over text message by writing, “Don’t give me that crap that you can’t work because you’re pregnant.” The manager then continued, “Either you don’t want to or you want to but it doesn’t matter anymore because you’re no longer employed with us.”

The judge ordered the two companies, Colmar and DB Delivery, and owner Collin Heacox to pay $41,672.36 to Alhasawi. Further, the judge mandated that the companies provide employees with materials for both the Healthy Starts Act and Washington Law Against Discrimination, and conduct training on employees’ rights under Washington law. They must develop these materials within 30 days and submit them to the Attorney General’s Civil Rights Division for approval.

“A pregnant employee does not have to choose between her job and her health,” Ferguson said. “This ruling communicates to employers around the state that my office will ensure pregnant employees are protected.”

“You’re no longer employed with us”

Alhasawi began working for Colmar and DB Delivery in November 2016. On January 24, 2018, she texted Operations Director Denise Brown to ask if she could avoid taking heavy items for the following day’s route. Brown asked why, and Alhasawi replied that since she was in the initial stage of her pregnancy her physician said she needed to be careful and not lift heavy items. She said she could get a note from her doctor but Brown declined the offer.

Brown then asked her to come in and drop off her work van because she would give Alhasawi’s entire route to someone else. Alhasawi asked why and Brown replied that it was because she could no longer lift 150 pound items as required. “I was going to have to let you go anyhow,” Brown texted. Brown later texted that other pregnant employees had worked their routes with no accommodations, then told Alhasawi none of that mattered “because you’re no longer employed with us.” 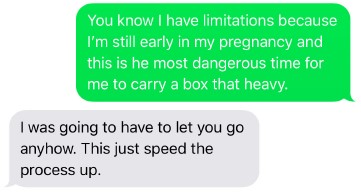 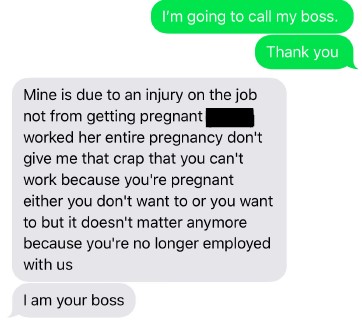 Alhasawi asked another manager if he could assist her, but he said he could not because Brown was the decision maker. He suggested she talk to Heacox, who she texted and called repeatedly, so that she could ask him to intervene on her behalf. Heacox never returned her calls or texts.

Alhasawi was the sole income earner for her family and had to move herself, her husband and their young child in with relatives across the state. In the order, Judge Rumbaugh acknowledged the emotional and economic damages that Alhasawi suffered due to the companies’ conduct, and awarded $16,069 for back wages, $470.36 for moving expenses, $133 for storage costs, and $25,000 for emotional distress.

During court proceedings, attorneys asked Heacox if he would grant accommodations to pregnant employees. Heacox responded that he would if they were “valuable.” State laws require that accommodation discussions happen with any employee who has made a request — regardless of a manager’s assessment of that employee’s “value.”

Ferguson created the Wing Luke Civil Rights Division in 2015 to protect the rights of all Washington residents by enforcing state and federal anti-discrimination laws. Ferguson named the division for Wing Luke, who served as an Assistant Attorney General for the State of Washington in the late 1950s and early 1960s. He went on to become the first person of color elected to the Seattle City Council and the first Asian-American elected to public office in the Pacific Northwest.

The bill unanimously passed both the state House of Representatives and Senate then took effect in July 2017. The Attorney General’s Office specifically cited the violations of the law, along with the Washington Law Against Discrimination (WLAD), in its December 2019 complaint.

Under the law, employers must provide certain accommodations for pregnant employees, including:

In addition, the WLAD prohibits discrimination against employees based on their pregnancy status or sex and prohibits firing employees or reducing their work schedules because they are pregnant.

There is more information about the Healthy Starts Act here: https://www.atg.wa.gov/pregnancy-and-breastfeeding-accommodations. Employees and employers can contact the Attorney General’s Office regarding legal pregnancy protections at pregnancy@atg.wa.gov or by leaving a message at (833) 660-4877. Employees may also submit a complaint using an online form.