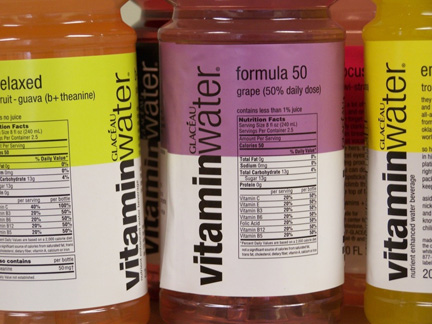 has been served notice of a class action lawsuit filed over what the Center for Science in the Public Interest (CSPI) says are deceptive and unsubstantiated claims on its VitaminWater line of beverages.

Coke labels VitaminWater with health buzz words as "defense," "rescue," "energy," and "endurance." According to CSPI nutritionists, the 33 grams of sugar in each bottle of VitaminWater do more to promote obesity, diabetes, and other health problems than the vitamins in the drinks do to perform the advertised benefits listed on the bottles.
Coca-Cola maintains that, “Glaceau vitaminwater is clearly and properly labeled and shows the amount of vitamins and calories in the product,” spokeswoman Diana Garza Ciarlante sent in a statement reported in Reuters.

Last month, the U.S. Food and Drug Administration sent Coca-Cola a letter warning about its marketing of Diet Coke Plus. The company’s claims that the soda includes vitamins and minerals violate U.S. policy against marketing soda and other snack foods as more nutritious, or “fortified.”