I’m feeling a bit nostalgic. Mr. Sony was my best friend in college. We shared my first dorm, then my first apartment and eventually went to work at the same office.

Mr. Sony was my first stereo – a bulky, black boombox with dual cassette deck, single CD player, detachable speakers and non-digital tuner. In our youth, we rocked to the Singles soundtrack, partied to Nirvana’s “Nevermind" and chilled to The Doors (who made a comeback thanks to the 1991 film starring Val Kilmer).

But as we grew older, Mr. Sony became ill. His antenna drooped. He hiccupped when he played a CD. He developed an appetite for mixtapes, chewing them to bits.

So today, we sang our last song as I carried Mr. Sony to a free electronics recycling event. Today is Earth Day. Today, Mr. Sony will be avoid a landfill grave and be reborn. 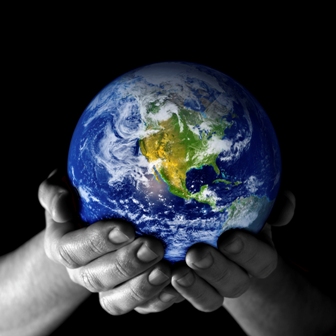 Since I spend so much time talking about how to protect consumers, I think it makes sense to dedicate today's column to mentioning how consumers can protect our world. So here are some easy ways to think green – and some Earth Day giveaways!

If you haven’t seen Google’s interactive Earth Day logo yet, visit the main Google page and roll your mouse over the different creatures. The panda likes having its belly rubbed!

Bing’s logo is neat too. At first, it appears to just be a photo of a jungle canopy. But move your mouse around for the “secret” messages. Then hit one of the arrows in the bottom right corner for additional photos and "hidden" notes.