UPDATE: As of August 2022, restitution checks and electronic payments of about $500 per person have gone out to about 8,900 Washington student loan borrowers who were enrolled in forbearance for an extended period of time between 2009 and 2017. For more details and the most up-to-date information on the Navient case, please visit www.NavientAGSettlement.com.

Washington was the first state, along with Illinois, to file a lawsuit against Navient, and the first to obtain a judgment stating Navient broke the law.

The student loan giant will:

Washingtonians do not need to take any action to receive these benefits. Borrowers receiving private loan debt cancellation will receive a notice from Navient, and they will receive refunds of any payments made on those loans after June 30, 2021. Washingtonians who are eligible for a restitution payment will receive a postcard in the mail from the Attorney General’s settlement administrator in the next several months. Federal student loan borrowers who may be eligible for a restitution payment are encouraged to update their contact information in their studentaid.gov account or create an account if they do not already have one.

For more details and the most up-to-date information, please visit www.NavientAGSettlement.com.

Borrowers who will receive restitution or debt relief span all generations: Navient’s harmful conduct impacted everyone from students who enrolled in colleges and universities immediately after high school to mid-career students who dropped out after enrolling in a for-profit school in the early 2000s.

“Higher education should not equal a lifelong debt sentence — and student loan corporations do not have the right to deceive Washingtonians in order to maximize their profits,” Ferguson said. “We are holding the country’s largest student loan servicer accountable, achieving hard-fought corporate reforms, and helping repair the damage they did to Washington borrowers. We will continue fighting to prevent the financial abuse of Washington students overburdened with debt.”

Forbearance was easy for Navient, bad for borrowers

Navient will pay restitution to Washington students it enrolled in forbearance instead of fully explaining the benefits of income-driven repayment plans. Navient unfairly pushed borrowers into forbearance, which was good for the company because it was simple and cheap, but resulted in long-term harm to most borrowers. Forbearance allowed borrowers to suspend payments temporarily, but their interest continued to accumulate. When repayment resumed, the accumulated interest would be added to the loan principal, meaning borrowers ended up paying interest on their initial interest. Unlike forbearance, income-driven plans offer the possibility of loan forgiveness after 20 or 25 years of qualifying payments, and can provide valuable interest subsidies. Under income-driven plans, payments can be as low as $0 per month. 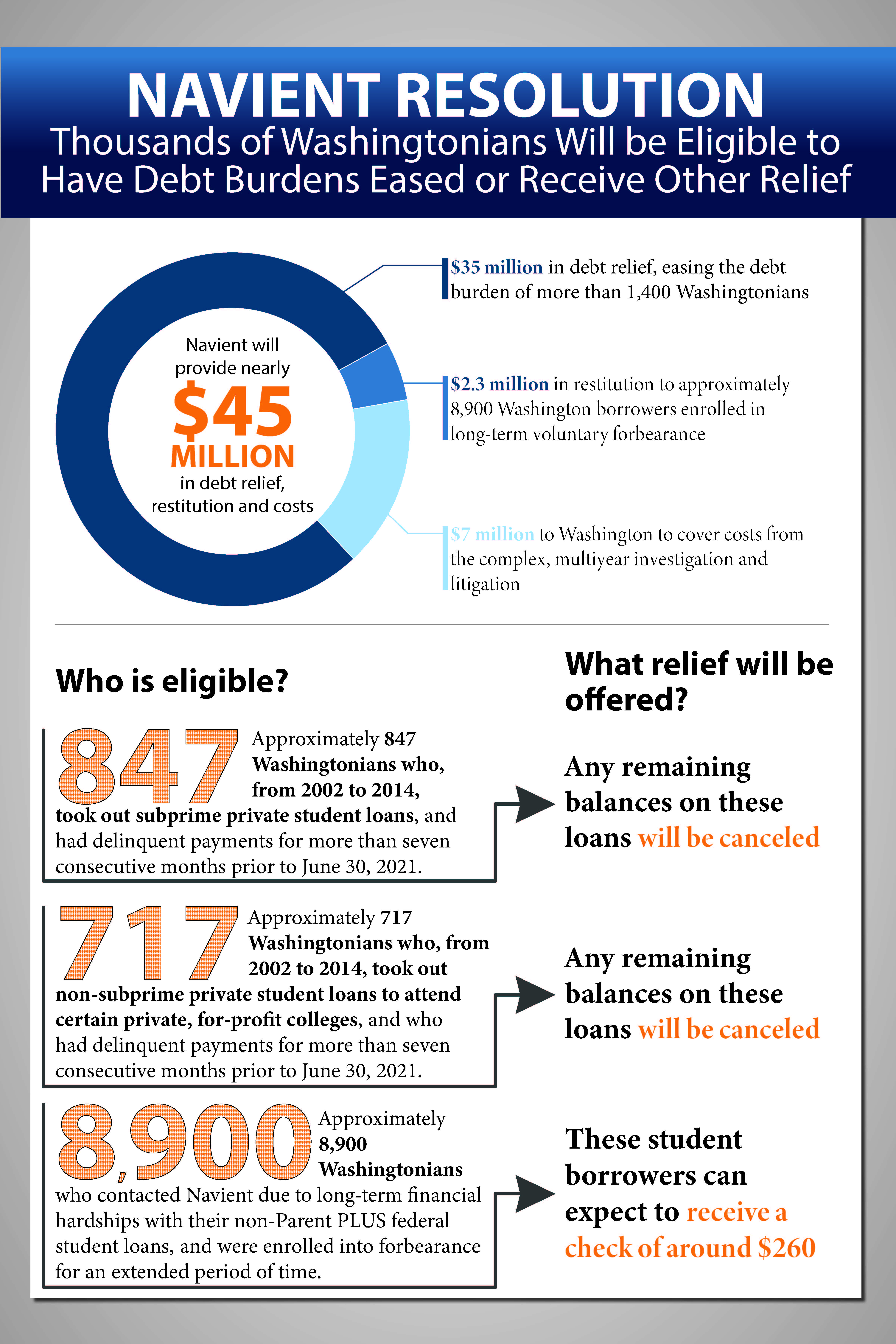 Today’s consent decree will apply to thousands of Washingtonians:

It also requires Navient to notify borrowers of the U.S. Department of Education’s important recent changes to the Public Service Loan Forgiveness (PSLF) program, which offers millions of qualifying public employees a waiver that may count past payments or periods of repayment toward loan forgiveness.

Ferguson encourages all Washington residents who work in the government or non-profit sectors to review the PSLF website or consult the Washington Student Loan Advocate’s website to determine whether they might qualify for loan forgiveness.

Student loan borrowers with questions or complaints about their student loans can contact the office of the Washington’s Student Loan Advocate by using the Washington student complaint portal at studentcomplaints.wa.gov.

On Oct. 20, 2021, Navient transferred its servicing of 5.6 million loans owned by the U.S. Department of Education to a company named Maximus, which will service loans under the brand name AidVantage. Following completion of this transfer, Navient will continue to service its existing portfolio of private student loans and legacy Federal Family Education Loans issued before the program ended in 2010.

Ferguson, along with the Attorneys General for Illinois, Pennsylvania, California, Massachusetts, Ohio and North Carolina, as well as the Consumer Financial Protection Bureau (CFPB), led an investigation into Navient’s business practices. Ferguson, the Illinois Attorney General and the CFPB filed the initial lawsuits against Navient on the same day in January 2017, then other states followed.

Ferguson’s lawsuit asserted that Navient deceptively promoted a “co-signer release” feature of private loans to entice family and friends to co-sign loans. However, Navient put up barriers to obtaining co-signer release without informing consumers in advance, and failed to disclose that very few borrowers ever achieved co-signer release.

In March 2021, King County Superior Court Judge Veronica Galván ruled that Navient violated the state’s Consumer Protection Act with its unfair and deceptive conduct related to this program. It was the first time a judge ruled that Navient broke a consumer protection law in a student loan servicing lawsuit filed by a state’s Attorney General or federal consumer protection agency.

Ferguson proposed the Student Loan Transparency Act in 2017 as Attorney General-request legislation. The act requires schools to provide students basic information on their student loans. The bill passed overwhelmingly in the House with a bipartisan vote and unanimously in the Senate.

In 2018, the Legislature passed the Student Loan Bill of Rights, which Ferguson requested to provide vital protections to Washington state’s student borrowers. The law created a dedicated student loan advocate to help students navigate the murky world of loan servicers and adopted standards for student loan servicers. The law also provided students with basic guarantees: Student loan servicers must credit borrowers’ payments within one business day, respond to requests for information promptly in writing and refund fees assessed in error, among other standards.

Ferguson has previously obtained millions of dollars in debt relief for thousands of student borrowers who attended for-profit colleges that used misleading and deceptive recruitment practices. He has also recovered almost $1.6 million cracking down on debt adjustment companies that charge fees to help borrowers consolidate their federal student loans and enroll in income-driven repayment plans — tasks that borrowers’ loan servicers can and should help them with free of charge.

To assist student loan borrowers in Washington, the Attorney General's Office has compiled a Student Loan Survival Guide. This guide provides tips and links to resources to help high school students thinking about attending college, former college students who are not able to keep up with their payments, parents of students and everyone in between.