OLYMPIA — Attorney General Bob Ferguson today announced that Kirkland-based timeshare exit company, Reed Hein & Associates LLC, must stop its deceptive timeshare exit practices and pay $2.61 million to Washington. If the company violates the terms of the consent decree, it will be required to pay an additional $19 million — a total judgment of $22 million. Reed Hein also retracted and apologized for statements made in response to the Attorney General’s lawsuit.

The Attorney General’s Office will use Reed Hein’s $2.61 million payment to provide restitution to Washingtonians harmed by Reed Hein’s timeshare exit scheme and for partial reimbursement of his office’s litigation costs. The amount of restitution each individual receives will depend on the number of claims and the severity of harms suffered due to Reed Hein’s conduct. If Reed Hein’s timeshare exit scheme impacted you or your family, please contact us by email at ReedHeinRestitution@atg.wa.gov to be notified when the claims process begins. The Attorney General’s Office will also proactively reach out to Reed Hein customers when the claims process is finalized using the contact information it received from Reed Hein. 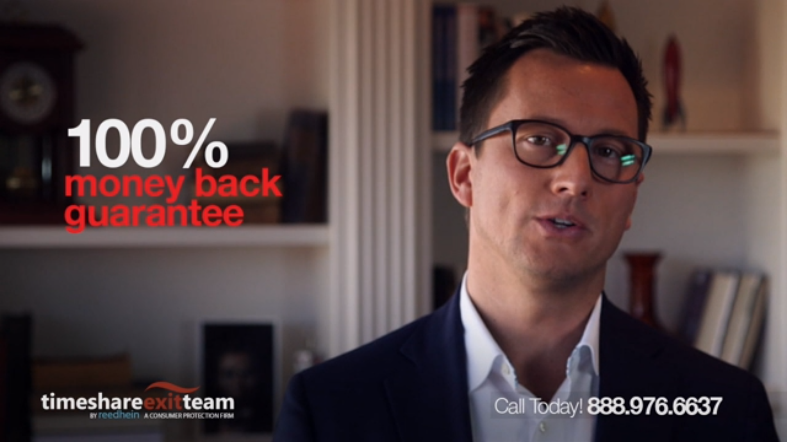 refunds, and are still denied refunds even after the company failed to deliver for years.

More than 2,800 Washingtonians entered into contracts with Reed Hein, paying thousands in upfront fees, ranging from just under $3,000 up to tens of thousands of dollars per “exit.” Many of these individuals are still waiting for an exit from their timeshare years after signing their contracts.

“Reed Hein deserves its F rating from the Better Business Bureau,” Ferguson said. “Their dishonesty and reckless behavior had grave financial consequences for its customers. Thanks to my legal team, millions of dollars will be returned to Washingtonians who lost money because they believed Reed Hein’s deceptive promises.”

Reed Hein deceptively advertised a 100 percent money-back guarantee. Under the terms of Reed Hein’s guarantee, customers who are facing foreclosure or were already foreclosed on are not entitled to their money back, because Reed Hein considers foreclosure a successful outcome — despite the potential negative impacts. Because of this practice, some Reed Hein customers have even struggled to obtain home loans. Reed Hein scrubbed the guarantee from its website shortly after the lawsuit was filed.

In the consent decree, Reed Hein issued the following apology and retraction for statements made in response to the Attorney General’s consumer protection lawsuit.

“Defendants retract and apologize for all public statements made questioning the propriety, motivations, or validity of the Attorney General’s allegations and lawsuit against Defendants, including but without limitation, statements attributed to Reed Hein’s legal counsel in an article titled, ‘Bellevue firm scammed millions from unhappy timeshare owners, AG alleges’ appearing in the Seattle Times on February 15, 2020.”

After the Attorney General’s Office filed its consumer protection lawsuit, Reed Hein’s attorney provided the following quote to the Seattle Times:  “This is maybe the most anti-consumer protection action Bob Ferguson has ever taken. To me, this suit is just blowing a kiss to the timeshare industry, one of the biggest enemies to consumers.”

Reed Hein must stop its deceptive and unfair practices

In addition to the $2.61 million payment, Reed Hein is required to:

If the company fails to comply with the terms of the consent decree, it will be required to pay more than $19 million in suspended penalties.

Impacted Washingtonians will receive restitution from the Attorney General’s Office

The Attorney General’s Office will implement a claims process to determine how to distribute restitution to consumers. The amount of restitution each individual receives will vary, depending on the number of claims and the severity of harms suffered due to Reed Hein’s conduct. Factors the Attorney General’s Office will use to determine the amount of restitution will include: whether the customer received any money back, whether their “file” is still pending with no hope of an exit and whether the customer was subject to particular damaging “exit” practices.

The Attorney General’s Office will proactively reach out to Reed Hein customers when the claims process is finalized using the contact information it received from Reed Hein.

Washingtonians wishing to be notified when the claims process begins can email [reedheinrestitution@atg.wa.gov].

The Attorney General’s Office learned of this conduct through complaints from Washington consumers. The office received 283 complaints from consumers about Reed Hein. Reed Hein has an F rating with the Better Business Bureau and is no longer accredited.

Several of these consumers submitted declarations in support of Ferguson’s case, describing the impact of Reed Hein’s conduct on their lives.

One Washington man sought the help of Reed Hein to get him and his wife out of their timeshare in Mexico. He traveled frequently for his work as a reverend, and let Reed Hein know that he would be unable to communicate for several months at a time. Under Reed Hein’s advice, he stopped paying for his timeshare. As a result, the resort brought a collection action against him, which he was unable to fight because he missed important communications regarding the collection while he was out of the country.

“We have not even been able to look into buying a house since returning from missionary work in Africa based on our lowered credit score,” he said in his declaration. “For the time being, I am unemployed as a proximate result of the COVID-19 pandemic. We are living on Social Security and cannot get credit because of the collection.”

One man received a letter from Reed Hein congratulating him on exiting his timeshare, claiming that he no longer was responsible for any fees to the resort. It wasn’t until he applied for a home remodeling loan that he learned he was, in fact, still responsible for paying for the timeshare and that his past-due account had been sent to collections from the resort months after Reed Hein sent the letter.

Another couple paid Reed Hein $6,600 to help them get out of their timeshare. After about three weeks, the couple stopped receiving any communication from the company. The company told the couple not to contact the resort, claiming it would make the process more difficult. Out of desperation, after many months of struggling to get answers from Reed Hein, the couple contacted the resort anyway. They discovered that the resort owners’ association offers a relatively easy exit process that consists of filling out a form and paying a $20 fee. Reed Hein never discussed this option with the couple.

Trevor Hein and Brandon Reed formed their company in 2012, after Reed attended a trade show where he noticed a long line at a booth selling timeshare exit services. They were previously employed selling rain gutter systems.

Ferguson’s lawsuit asserts that Reed Hein does not possess its claimed expertise in exiting timeshares, exposing its customers to unanticipated negative consequences. Instead, Reed Hein’s business model was to outsource nearly everything. Experiences vary from customer to customer — sometimes Reed Hein hires an attorney or sometimes a transfer company (a company that may find someone to take over the timeshare). Because Reed Hein lacks expertise in timeshares, and sometimes has no contract with their vendors governing the vendors’ conduct, the company often does not know whether the vendor is pursuing an effective or legal course of conduct to get the customer out of their timeshare.

In fact, some consumers were congratulated by Reed Hein for a successful timeshare exit, only to find out months or years later that they had not actually gotten out of their timeshare contract, and now owe a significant amount of money to the resort. They may have been sent to collections or otherwise had their credit damaged.

Reed Hein has contracted to provide more than 41,000 timeshare exits across North America. Of those, more than 16,000 are still pending — thousands of which have been pending for three years or longer.

For many consumers, Reed Hein’s promise of a 100 percent money-back guarantee was a major factor in their decision to contract with the company.

In practice, Reed Hein regularly denies refunds. Reed Hein’s position is that anything that terminates the customer’s timeshare ownership is an “exit” in satisfaction of the guarantee, meaning that Reed Hein is not obligated to provide a refund — even if that “exit” is the resort foreclosing on the customer, or the customer finding some way out of the contract on their own. For years, Reed Hein also interpreted their guarantee to mean that no refunds were owed so long as the company said they still were working on the case. Reed Hein stopped offering the guarantee after Ferguson’s lawsuit.