UPDATE: This release has been updated with information on a separate class action settlement with cities, which includes Spokane and Tacoma.

In 2016 Washington was the first state to file a lawsuit against Monsanto over its PCBs, asserting that the company produced PCBs for decades while hiding what they knew about the toxic chemicals’ harm to human health and the environment. Monsanto was the only U.S. company to produce PCBs from 1935 until it was banned in 1977.

After three years of intense litigation — including defeating multiple efforts by Monsanto to have the case dismissed and moved to federal court — Monsanto will pay $95 million as compensation for damages PCBs have inflicted on the state’s natural resources, including the economic impact to the state and its residents.

The majority of the payment will go to the state General Fund. Ferguson is urging the Legislature to use these funds as the lawsuit intended: to help clean our water and protect orcas and salmon in the wake of decades of pervasive PCB contamination across the state. The remaining funds will be used to pay the costs associated with litigating the complex case and to help fund the continued environmental protection work of the Attorney General’s Office.

“Monsanto knew the dangers of PCBs, but hid them from the public to protect their profits,” Ferguson said. “Washington has been shouldering the health and environmental costs of PCB contamination and clean up for decades. This record payment holds Monsanto accountable for the harm they inflicted on our state.”

“For decades, Monsanto manufactured and marketed PCBs, despite knowing the tremendous risk that PCBs pose to fish, wildlife and people,” said Gov. Jay Inslee. “This settlement holds Monsanto accountable for its actions and will help us address the legacy PCB pollution in our waters, fish, lands and air.” 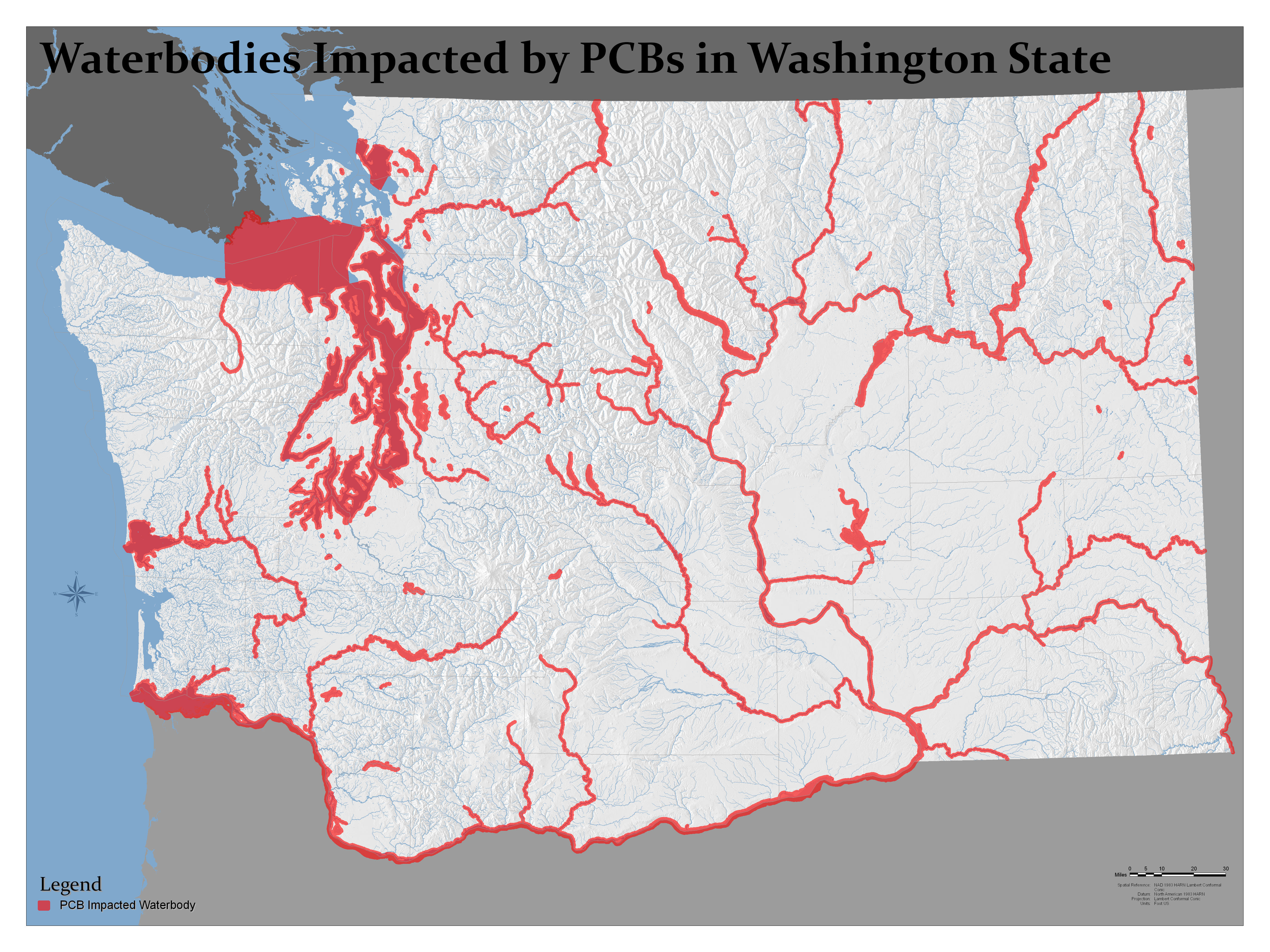 PCBs have been found in bays, rivers, streams, sediment, soil and air throughout Washington, with more than 600 suspected or confirmed contamination sites from Puget Sound to the Wenatchee River, Lake Spokane to Commencement Bay.

PCBs accumulate in the tissues of fish, orcas and other animals, including humans. The state Department of Health has issued multiple warnings about fish consumption from rivers, lakes and Puget Sound. Currently, there are 13 bodies of water with active fish consumption advisories related to PCBs, covering several stretches of the Columbia River, all 26,000 acres of Lake Washington, 21 miles of the Wenatchee River and more.

In King County Superior Court in December of 2016, Ferguson filed the nation’s first statewide environmental lawsuit against Monsanto over its manufacturing, marketing and distribution of PCBs. The states of New Mexico, Oregon and Ohio have since filed similar lawsuits over PCBs, as has Washington, D.C.

PCBs, marketed and sold under the Monsanto brand name Aroclor, were used in many industrial and commercial applications, from paint and caulking to transformers, capacitors and coolants, among other uses. 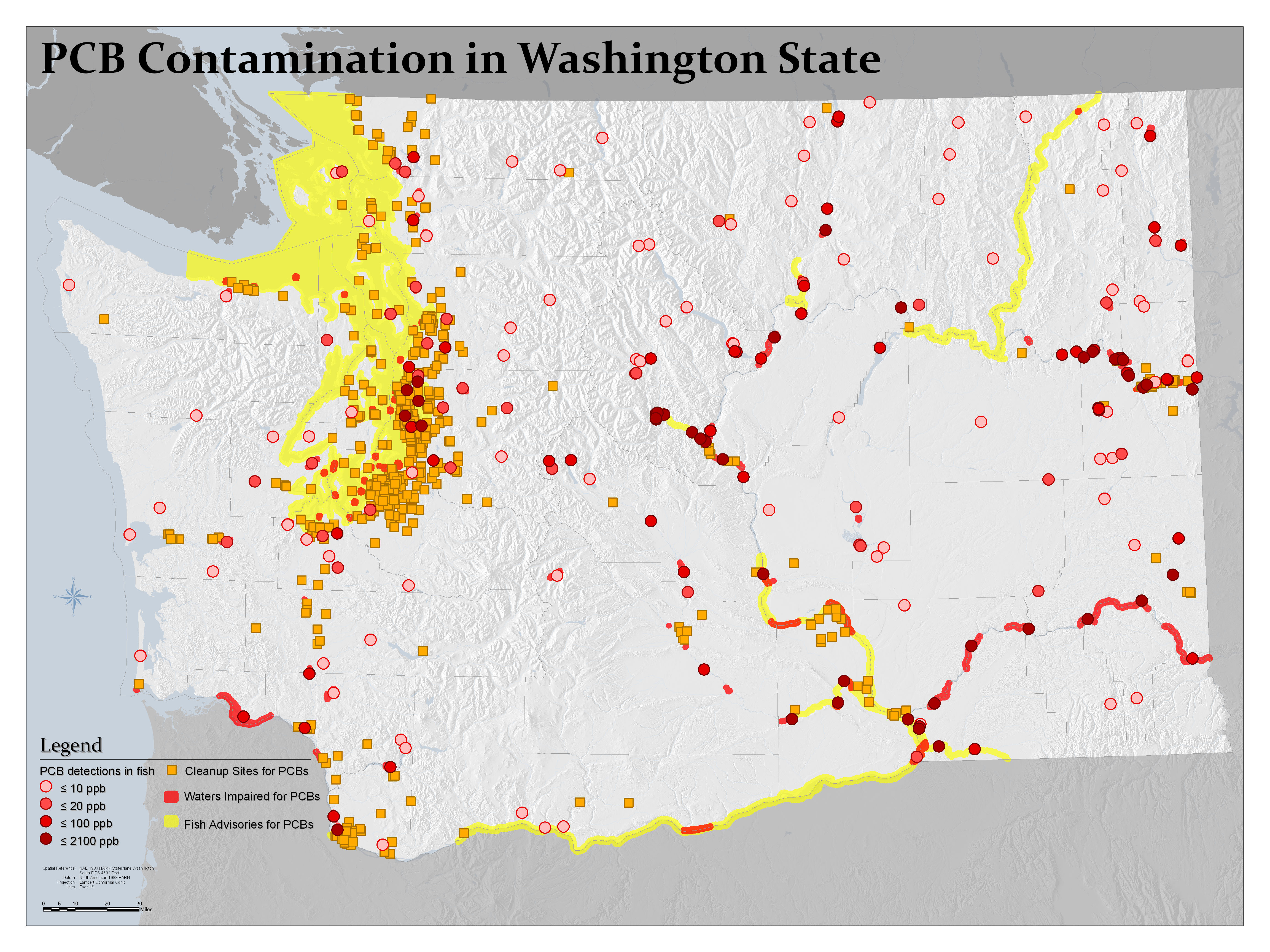 ation but kept that information from the public. The company chose to conceal the toxicity and pervasive contamination of its chemicals in favor of profits, Ferguson’s lawsuit alleged.

“There is no practical course of action that can so effectively police the uses of these products as to prevent environmental contamination,” an ad hoc Monsanto committee on PCBs stated in a 1969 internal report. “There are, however a number of actions which must be undertaken to prolong the manufacture, sale and use of these particular Aroclors.”

Another internal report bluntly stated that “there is too much customer/market need and selfishly too much Monsanto profit to go out” to cease PCB production, despite the dangers. Monsanto continued to produce PCBs for another 10 years after articulating that conclusion.

When Washington filed its lawsuit, several cities, including Seattle and Spokane, also had pending lawsuits against Monsanto over the water treatment costs associated with PCB contamination. The state’s lawsuit is separate from the cities’ and covers much broader ground.

In addition to today's resolution with Washington state, a nationwide class of cities have negotiated a class action settlement with Monsanto, under which 2,528 governmental entities such as cities, counties, and port districts may recover a share of a $550 million pool. The proposed settlement class, structure, and amount are subject to the approval of a federal district judge in California. The Cities of Spokane and Tacoma are among the named plaintiffs in the class, but the settlement would be available to a range of Washington entities, including the Port of Seattle and King County.

Under the terms of the settlement, Monsanto will pay $95 million within 60 days to resolve its manufacturing, marketing, and distribution liability related to PCBs in the state. This resolution does not impact any pending or potential liability related to the direct discharge of PCBs in the state, including PCB contamination at Superfund sites along the Lower Duwamish River.

At least $60 million will go to the state General Fund.

“I urge the Legislature to use this historic recovery to help repair the damage PCBs have inflicted on our environment and public health in Washington state,” Ferguson said. “This recovery should be invested in our environment.”

About $2 million will cover the Office of the Attorney General’s legal costs related to bringing the case. Ferguson will reinvest $10 million to support the office’s environmental work on behalf of Washingtonians through the Environmental Protection Division. That division receives no General Fund support, and is funded entirely by recoveries in successful lawsuits.

The Environmental Protection Division is one of five affirmative litigation divisions, including Consumer Protection, Civil Rights, Complex Litigation and Antitrust. These divisions receive virtually no General Fund support, but have returned more than $650 million to Washingtonians and state and tribal governments since 2013. This represents a return on investment of $35 for every $1 the state has spent on funding for this work.

In order to pursue this complex case, the office partnered with outside law firms Baron & Budd and Harrigan Leyh Farmer & Thomsen. Baron & Budd had already investigated Monsanto and gathered internal documents and evidence showing the company knew for decades about the health and environmental impacts of PCBs. The office also worked with state agencies to prepare its case against Monsanto. The total effort involved more than a dozen attorneys.

The Environmental Protection Division led and oversaw the case. The outside firms shouldered significant costs in bringing the case, and will receive approximately $21.25 million of the settlement.

The arrangement with the outside firms is rare, but not unprecedented, given the scale and complexity of the case. The arrangement is similar to the state’s approach during lengthy multi-state litigation against big tobacco companies, which garnered a record multi-billion national settlement, split among the states.