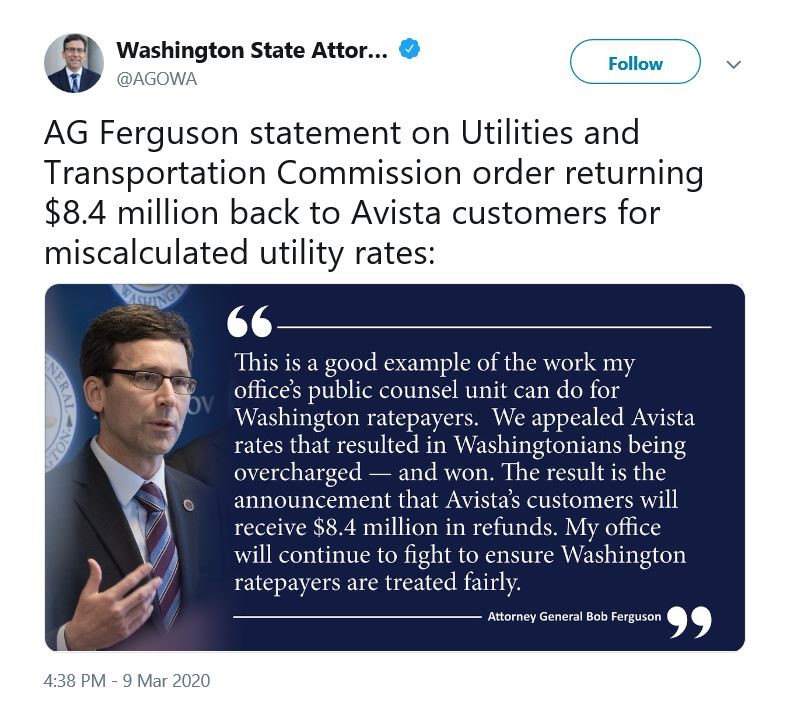 Washington State Attorney General Bob Ferguson:  “This is a good example of the work my office’s public counsel unit can do for Washington ratepayers. We appealed Avista rates that resulted in Washingtonians being overcharged—and won. The result is the announcement that Avista’s customers will receive $8.4 million in refunds. My office will continue to fight to ensure Washington ratepayers are treated fairly.”

Since the start of the pandemic, Public Counsel has been monitoring regulated utility company responses to COVID-19. On July 2, 2020, Governor Inslee extended the moratorium on service disconnects and late fees for all energy, landline telephone, and water utilities through the earlier of September 30 or termination of the state of emergency. Customers who have trouble paying their utility bills should call the Commission at 888-333-WUTC (9882) for information about available assistance. Utilities have bill assistance, debt relief, and repayment plans available.

The Commission opened a docket to discuss how investor-owned utilities’ should respond to the COVID-19 Pandemic (Docket U-200281). Public Counsel attended several meetings and submitted eight comments, six on behalf of Public Counsel and two on behalf of a coalition of Consumer Advocate groups:  The Energy Project, Sierra Club, NW Energy Coalition, Front and Centered, and Puget Sound Sage. The Commission entered an order on May 18, 2021, which would allow the resumption of utility disconnections on August 1. Public Counsel filed a petition to reconsider and stay this order, seeking an extension of the disconnection moratorium through September 30, 2021, and retaining the Commission’s ability to evaluate whether the moratorium should be lifted. The Commission subsequently issued an order on July 2, extending the moratorium through September 30 as a result of the Governor’s proclamation and, thus, considered Public Counsel’s petition for reconsideration to be “moot.”

Investor-owned utilities Avista, PacifiCorp, Northwest Natural Gas, Cascade Natural Gas, Suncadia Water, and Cascadia Water filed petitions to the Commission for authorization to defer costs associated with the COVID-19 public health emergency for later recovery. The utilities sought to defer such costs as lost revenues, late and reconnection/disconnection fees, “direct” costs related to the pandemic, labor costs, the cost of bill assistance programs, and bad debt. Public Counsel filed a Joint Response with The Energy Project on November 19 opposing deferral of all costs except the costs of bill assistance programs and bad debt. On December 10, the Commission filed Orders for each case, granting the accounting petitions subject to particular conditions.

In December 2020, Cascadia Water (a subsidiary of Northwest Natural Holdings) proposed a 53.8 percent rate increase (Docket UW-200979) for all of its water systems to be adjusted into a company-wide rate. Since Cascadia’s water systems, spanning from Sequim to Whidbey Island, currently function on varying rates, the shock of rapid rate increases would impact certain communities more than others. The company sought an average company-wide increase of $10.75 or 37 percent, though some communities would experience an average increase of over 70 percent. Public Counsel recommended the Commission reject the planned implementation of Cascadia Water’s request to avoid and mitigate rate shock to Cascadia’s customers by adopting a three-year phased rate increase with incremental increases every six months. Due to the request for a company-wide rate and the proposed rapid increases amidst the COVID-19 pandemic, a group of customers from the Sequim and Dungeness area participated in the informal proceedings, and requested for their rates to remain separate from Whidbey Island systems. Commissioners considered the matter at its regularly scheduled open meetings on May 20 and June 24, hearing presentations from Commission Staff, Public Counsel, customers, and the company. The Commissioners accepted Cascadia’s initial rate increase over two years in four phases, but ordered that the rates be split based on different “Island” and “Peninsula” rates. New rates went into effect for customers on July 1, 2021.

The Commission conducted several rulemakings to implement the Clean Energy Transformation Act (CETA), which was passed by the Legislature in 2019 and is codified at Chapter 19.405 RCW. CETA mandates that electric utilities eliminate coal-fired generation from the energy it sells in Washington by 2025, provide electricity that is carbon neutral by 2030, and provide electricity that is carbon free by 2045. Public Counsel represented the consumer interest in each of the following dockets:

The Commission filed a complaint alleging CenturyLink violated state statutes by improperly managing their 911 services, causing a major 911 outage in December 2018 across the state that lasted 49 hours and 32 minutes. Commission Staff, which functions as a party in Commission proceeding, prepared a technical report identifying the cause of the outage to be CenturyLink’s improper configuration of its network infrastructure. The report also indicates deficient network management and alleges that this led to the lengthy duration of the outage. Public Counsel will file testimony on July 29 and participate in an evidentiary hearing in January 2022.

The Commission released a final order on June 1, 2021, approving the settlement agreement regarding Puget Sound Energy‘s request to update its power costs. The final settlement included a revenue increase for the Company of $65.3 million, or 3.07 percent, as well as a modification to the Green Direct program to reduce potential cross-subsidization, an adjustment to better reflect the costs and benefits of the Energy Imbalance Market, and an increase to funding for the low income assistance program. Public Counsel did not join the settlement, but filed testimony addressing it (Docket UE-200980).

The UTC lowers Cascade Natural Gas’s rates, agreeing with Public Counsel and other parties that Cascade had failed to demonstrate a revenue deficiency

On May 18, 2021, the Commission rejected Cascade Natural Gas’s rate increase request of $13.8 million, or 5.283 percent, in base rates, and ordered a decrease amounting to $0.39, or 0.15 percent (Docket UG‑200568). The Commission, in their decision, agreed with Public Counsel and other parties that Cascade had failed to demonstrate a revenue deficiency in the rate effective year. The rate change will be spread equally across all Cascade utility customers.

On December 17, 2020, Public Counsel held the first entirely virtual Legislative Preview for its Citizens' Advisory Committee. The Citizens’ Advisory Committee, which is made up of consumer groups from around the state, representing low-income, rural, small business, environmental organizations, and others, meets with Public Counsel quarterly to discuss utility topics as well as important policies and decisions made by the WUTC. Our December meeting, which occurs just before the start of the state legislative session, previews upcoming legislative and policy goals of utilities, industry organizations, and government agencies. Although the meeting is commonly held in person at a venue near the State Capitol, virtual attendance was high with many industries joining for the first time, such as the Washington Trucking Associations and Washington Movers Conference. Policies such as expansion of broadband networks, carbon regulation/pricing, the Clean Energy Transformation Act and much more were discussed.

The Commission approved a settlement, which established a three-year rate plan for PacifiCorp, and an immediate revenue decrease of $4.15 million, or 1.18 percent (Docket UE-191024). The decision also established a new low-income bill assistance advisory group, and required development of a Disconnection Reduction Plan that binds PacifiCorp to disconnection practices aimed at keeping customers connected. All parties to the proceeding, including Public Counsel, joined the settlement.