OLYMPIA — Attorney General Bob Ferguson led eight other attorneys general in filing a formal objection today asking the judge to reject Purdue Pharma’s proposed bankruptcy plan, which includes a lifetime legal shield for the company’s owners, the Sackler family. The states argue that a bankruptcy court doesn’t have the authority to prevent attorneys general from enforcing state law, including the decision to pursue the Sacklers for their illegal conduct.

“This settlement plan allows the Sacklers to walk away as billionaires with a legal shield for life,” Ferguson said. “It’s up to the states — not a bankruptcy court — to decide whether states should hold the Sacklers accountable in a court of law. We’re asking the court to reject this flawed proposal. The Sacklers should not be allowed to profit from their misconduct.”

Purdue’s bankruptcy plan proposes that the Sackler family pay $4.3 billion to the group of states, municipalities and private plantiffs, including Washington, that sued the company in 2017. Ferguson’s objection, filed today in the U.S. Bankruptcy Court for the Southern District of New York as part of Purdue’s bankruptcy proceedings, asserts $4.3 billion is miniscule in context: The Sackler family made over $11 billion in profits from producing and deceptively marketing OxyContin, a major driver in the rise of the opioid crisis.

The crisis has cost the nation millions of lives and at least $2 trillion in damage. Based on expert reports, it will cost Washington state alone tens of billions of dollars to fix the state’s opioid crisis. 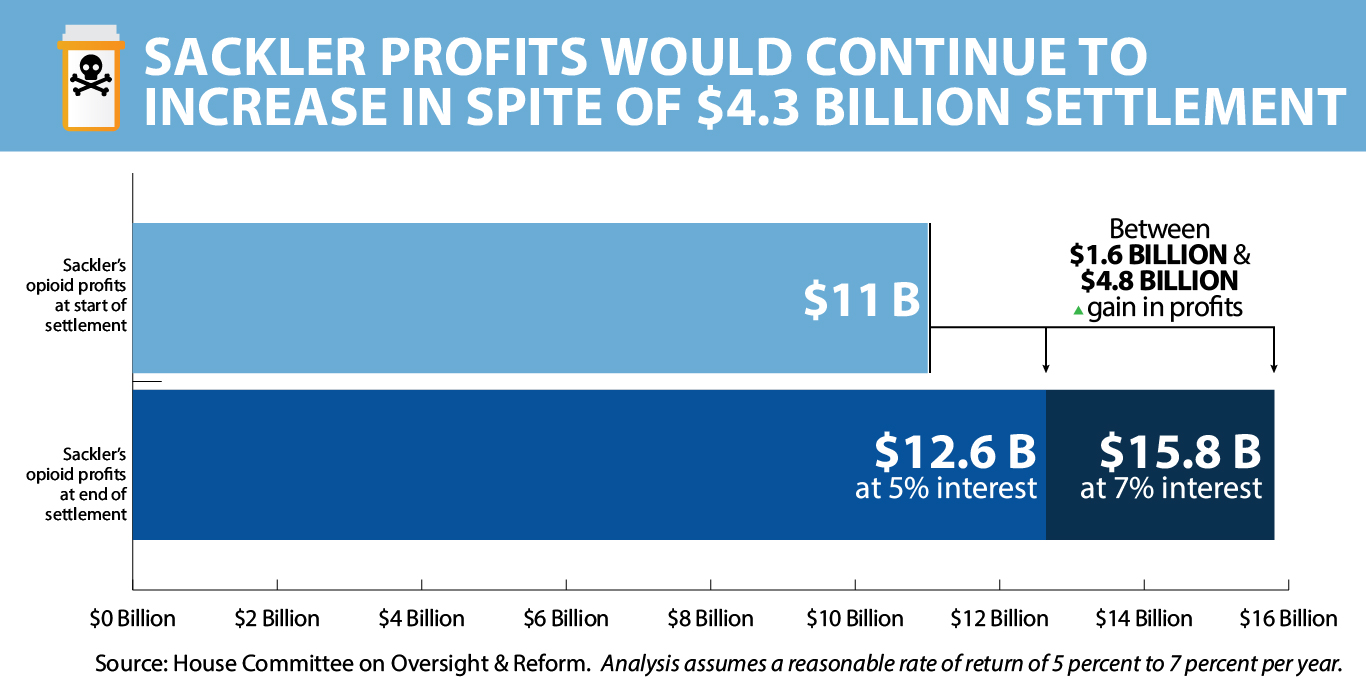 As noted in a recently published New York Times op-ed, by the time they are finished paying this settlement, the Sacklers will be wealthier than they were when they started: “The Sacklers proposed to pay the $4.5 billion out over nine years. Their current fortune is estimated to be at least $11 billion. Conservatively, with interest and investments, this means they can expect a 5 percent annualized rate of return on that fortune. If that’s the case, they’ll be able to pay the fine without even touching their principal. When they’re done paying in 2030, they will probably be richer than they are today.”

The states’ objection argues the Sacklers should not be handed a federal injunction shielding the lion’s share of their multi-billion-dollar fortune in exchange for payments that cover less than one percent of the damage they caused.

Washington’s opposition to this settlement does not prevent Washington from receiving its share of the settlement funds. If the judge denies the objection and approves Purdue’s proposal, Washington and the other objecting states will still receive their share of the $4.3 billion settlement fund. Although the plan is still being finalized and these numbers are preliminary, Washington’s portion of this fund is estimated to be about $67 million to $76 million over 11 payments. Factoring in inflation, the estimated total value in today’s dollars is $53 million to $60 million.

Joining Washington in filing the objection is California, Connecticut, Delaware, Maryland, Oregon, Rhode Island, Vermont and the District of Columbia.

The hearing on the bankruptcy plan is set to begin on August 9. The judge will decide on whether to approve the plan shortly after.

Washington is one of 48 states that sued Purdue Pharma, the maker of OxyContin, for fueling the opioid epidemic. Washington’s lawsuit asserts Purdue embarked on a massive deceptive marketing campaign to convince doctors and the public that OxyContin is effective for treating chronic pain and has a low risk of addiction, all without evidence to support its claims. This deceptive marketing resulted in the deaths of Washingtonians and devastation to Washington families.

The lawsuit contends Purdue conducted an uncontrolled experiment on the American public without any reliable clinical evidence that opioids are effective at treating chronic pain. To doctors and patients, Purdue consistently downplayed the risks of addiction from long-term use and deceptively represented opioids as safe for treating long-term chronic pain.

The opioid epidemic continues to rise. The CDC recently reported that more than 93,000 Americans died from an opioid overdose last year, a record number and a 30 percent jump from 2019.

In October 2019, shortly before the lawsuit was set to go to trial, Purdue declared bankruptcy, and then obtained an injunction halting all state legal actions against the company. As part of the bankruptcy proceedings, Purdue had to draft a plan that, once approved by the judge, governs how the company will pay back all its creditors — including the 48 state attorneys general that filed suit.

For the last several years, the Attorney General’s Office has taken on complex cases to hold major corporations accountable for their role in the opioid crisis. Earlier this year, a multinational consulting firm that worked with Purdue was legally required to pay $13.4 million to the Attorney General’s Office. The consulting firm, McKinsey, discussed ways for Purdue to “turbocharge” sales of OxyContin.

In January 2020, Ferguson filed a lawsuit against Johnson & Johnson, one of the largest suppliers of the raw materials used to produce opioid pain medications, accusing the multinational company of playing a key role in driving the entire pharmaceutical industry to vastly expand the use of prescription opioids.

Ferguson also sued the three largest distributors of opioids — McKesson Corp., Cardinal Health Inc. and AmerisourceBergen Drug Corp. — in 2019, asserting they made billions of dollars feeding the opioid epidemic by shipping huge amounts of oxycodone, fentanyl, hydrocodone and other prescription opioids into the state even when they knew or should have known those drugs were likely to end up in the hands of drug dealers and addicts.

In the summer of 2017, the Attorney General’s Office hosted a summit on Washington’s opioid epidemic in partnership with the Washington State Patrol and the Washington Association of Prosecuting Attorneys. A report developed by the organizations after the summit included a range of recommendations, several of which became the subject of Attorney General request legislation in the 2018 legislative session. Those proposals included limits on new opioid prescriptions, which failed to pass the Legislature. However, in the first half of 2019, state medical boards implemented new opioid prescription limits in Washington state similar to those requested by Ferguson.