SEATTLE — Attorney General Bob Ferguson announced that Washington state is set to receive the maximum $518 million under a resolution with three companies found to have played key roles in fueling the opioid epidemic. All 125 eligible local governments signed onto the half-billion dollar opioid resolution stemming from Ferguson’s lawsuit.

The completion of the resolution ends Ferguson’s lawsuit. The first payments will begin flowing to Washington communities Dec. 1.

The trial lasted six months, and led to a resolution requiring the three Fortune 15 companies to pay a total of $518 million — $46 million more than Washington would have received under the national settlement. Ferguson is directing the additional $46 million be used to provide substance abuse treatment and support other strategies to address the opioid crisis, including housing and other wrap-around services.

All 125 jurisdictions joined the resolution, ensuring that the maximum recovery would come to Washington. Local governments will receive a total of $215 million, divided per an agreement negotiated amongst themselves. The state will also receive $215 million to fund opioid remediation, plus the additional $46 million Ferguson is directing to that purpose. In all, more than $476 million will be directed to addressing the opioid epidemic in Washington, paid over a period of 17 years.

The first payment is the largest. Washington will receive $55 million on Dec. 1. These resources will support improved and expanded treatment options, youth-focused prevention strategies, support for first responders and other evidence-based programs and services that will help communities heal.

“This is a major milestone — one of the largest resolutions in Washington state history — but we’re not done fighting back against the opioid epidemic,” Ferguson said. “This represents significant accountability for the opioid distributors that helped fuel the epidemic, as well as urgently needed resources to fight it. The crisis is far from over. Our fight to hold these mega-corporations accountable will continue.”

This is part of a wider effort by Ferguson to combat the opioid epidemic and recover resources to address the ongoing crisis.

It is the second time Ferguson’s rejection of a national settlement led to a better deal for Washingtonians. In March, Ferguson announced that Washington will receive $183 million to address the opioid crisis as a result of his office successfully leading the challenge to the Purdue bankruptcy plan — $113 million more than Washington would have received under the original deal.

As part of his strategy of rejecting national settlements and choosing to litigate, Ferguson also declined to settle with Johnson & Johnson last year.  The Washington Attorney General’s Office has a trial scheduled against opioid manufacturer Johnson & Johnson in September. Ferguson’s legal team is conducting multiple ongoing investigations into conduct by other entities that helped fuel the epidemic.

In all, Ferguson’s opioid initiative has recovered approximately three-quarters of a billion dollars for Washington.

In order to finalize the resolution and receive the full recovery, 125 local governments needed to sign onto the agreement, including:

Had the sign-on effort fallen short, Washington would have received a lower dollar figure, or the entire resolution could have been jeopardized.

Now that the sign-on process is complete, the specific totals flowing to each participating jurisdiction are available for the first time.

A full list is available here. The top five counties, including their local governments, are: 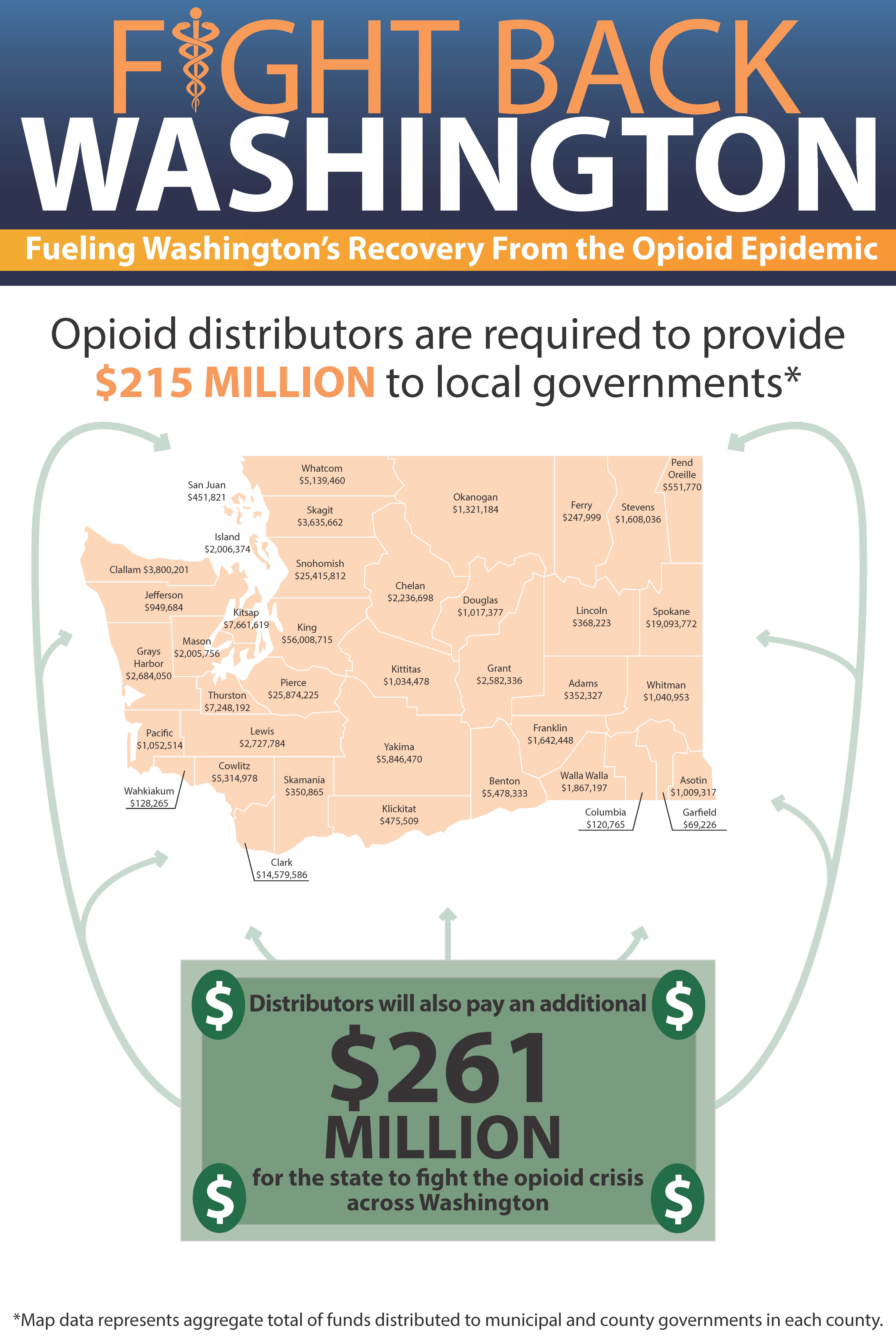