OLYMPIA — The Washington Legislature has passed Attorney General Bob Ferguson’s bill to increase access to affordable health care for millions of Washingtonians. The measure now heads to the governor for his signature.

The legislation requires large hospital systems to provide more financial assistance. Beginning July 1, approximately half of all Washingtonians will be eligible for free or reduced-cost care at hospitals that represent approximately 80 percent of the licensed beds in the state.

“Too many Washingtonians are just one hospital bill away from financial crisis,” Ferguson said. “Under current law, a single parent working two minimum wage jobs at 50 hours per week was not eligible for financial assistance at Washington hospitals — that’s not right and it needed to change. This bill ensures that help is there for those who need it.”

“No Washingtonian should be bankrupted by a trip to the emergency room,” Rep. Simmons said. “I am proud to have worked with the Attorney General to update and standardize Washington’s charity care law. Four million Washingtonians will now be eligible for free or reduced out-of-pocket hospital costs making our healthcare system fairer and more equitable.”

Ferguson and Simmons’ legislation establishes two tiers of financial assistance — one for large health care systems and another for smaller, independent hospitals. Once SHB 1616 takes effect, Washington will have the strongest protections in the country for out-of-pocket hospital costs.

Nationwide, about two-thirds of individuals who file for bankruptcy cite medical issues as a key contributor, and more than half of collection items on credit reports are for medical debts.

Access to care is also an equity issue, as communities of color are disproportionately underinsured, and especially vulnerable to catastrophic and unexpected medical expenses.

The bill significantly increases eligibility for full write-offs of out-of-pocket hospital costs, as well as expanding eligibility for discounts. The bill ensures all Washingtonians within 300 percent of the federal poverty level are eligible for financial assistance, with discounts up to 400 percent of the federal poverty level for the vast majority of Washington hospital beds.

Current law only provides full write-offs for those earning up to 100 percent of the federal poverty level — up to $17,420 a year for a two-person household — and sliding scale discounts up to 200 percent. Approximately 1.8 million Washingtonians are eligible for financial assistance under current law. Under current law, a single parent working two minimum wage jobs at fifty hours per week is not eligible for financial assistance at Washington hospitals.

AGO enforcement of charity care law

Under state law, hospitals are required to:

As the result of a 2017 lawsuit, CHI Franciscan provided $41 million in debt relief and $1.8 million in refunds, in addition to rehabilitating the credit of thousands of patients who were not offered charity care when they were eligible at eight of its hospitals in Washington. CHI Franciscan also paid $2.46 million to the Attorney General’s Office to cover the costs of the investigation and enforcement of the Consumer Protection Act.

Ferguson also sued Capital Medical Center in Olympia in 2017 over its charity care practices. To resolve the lawsuit, Capital provided at least $250,000 in refunds and more than $131,000 in debt relief. In addition, Capital paid $1.2 million to the Attorney General’s Office. 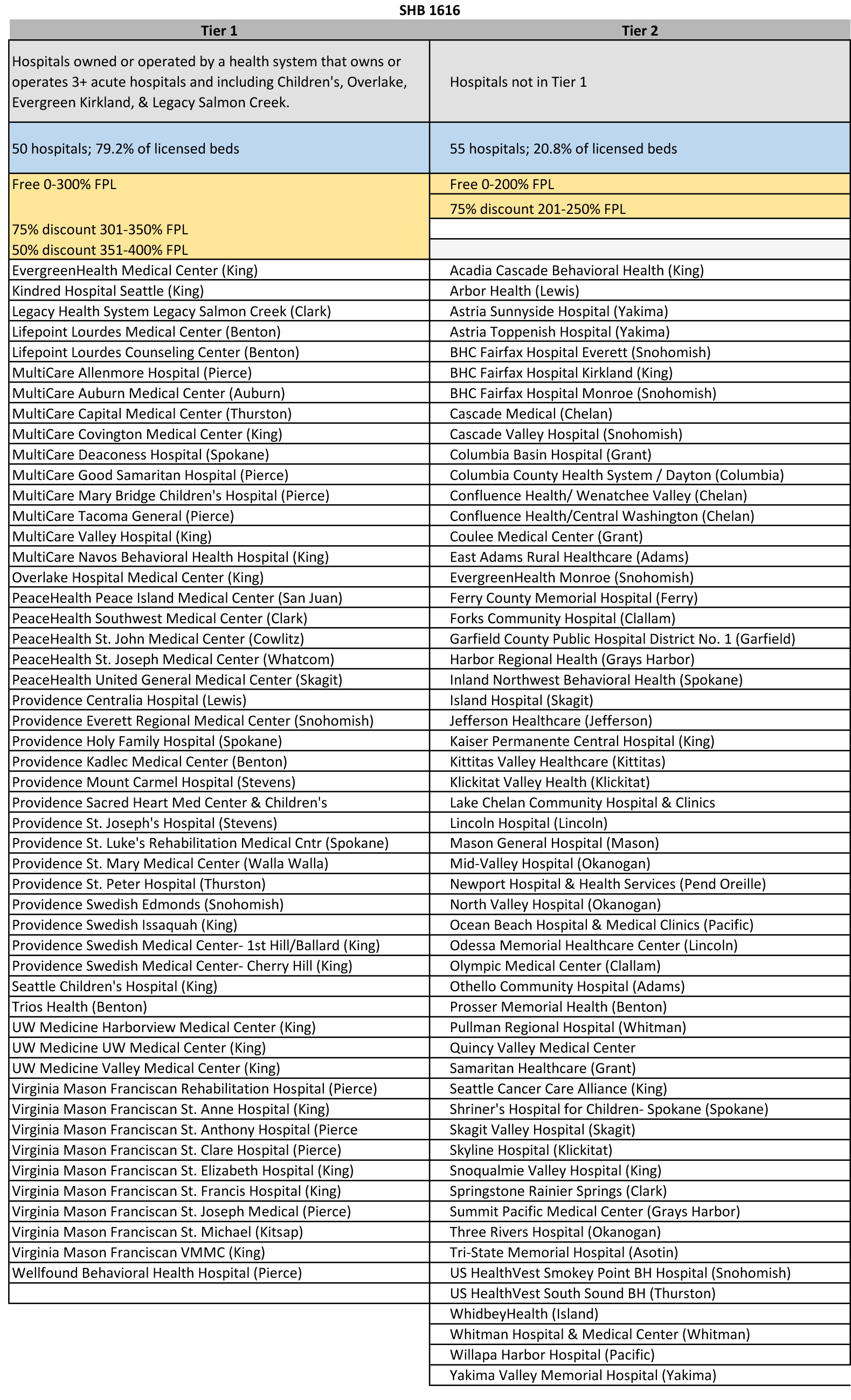