CORRECTION: This press release has been corrected to reflect that the office's affirmative lititgation divisions have delivered about $40 in restitution and state services for every $1 in state funding. The release previously omitted state services, incorrectly stating that the entire $40 was in the form of restitution to Washingtonians.

OLYMPIA — Attorney General Bob Ferguson today announced that his office’s Consumer Protection Division, and other divisions that work directly on behalf of Washingtonians, have delivered more than $1.14 billion since January 2013, including the Purdue Pharma bankruptcy resolution that awaits court approval.

Since January 2013, the Attorney General’s six affirmative litigation divisions delivered approximately $40 to Washingtonians in the form of restitution and increased services for every $1 received in state funding.

“My office takes on powerful special interests that refuse to play by the rules and puts money back in the pockets of Washingtonians,” Ferguson said. “As the people’s attorney, I will continue fighting every day for Washingtonians.”

The Attorney General’s six affirmative litigation divisions recovered nearly $1.14 billion for Washingtonians since January 2013. In the past two years, they recovered more than $300 million, including the $183 million Purdue Pharma resolution. These recoveries include direct restitution payments to Washingtonians and indirect benefits in the form of payments to non-profits, tribes and government agencies that increase services. 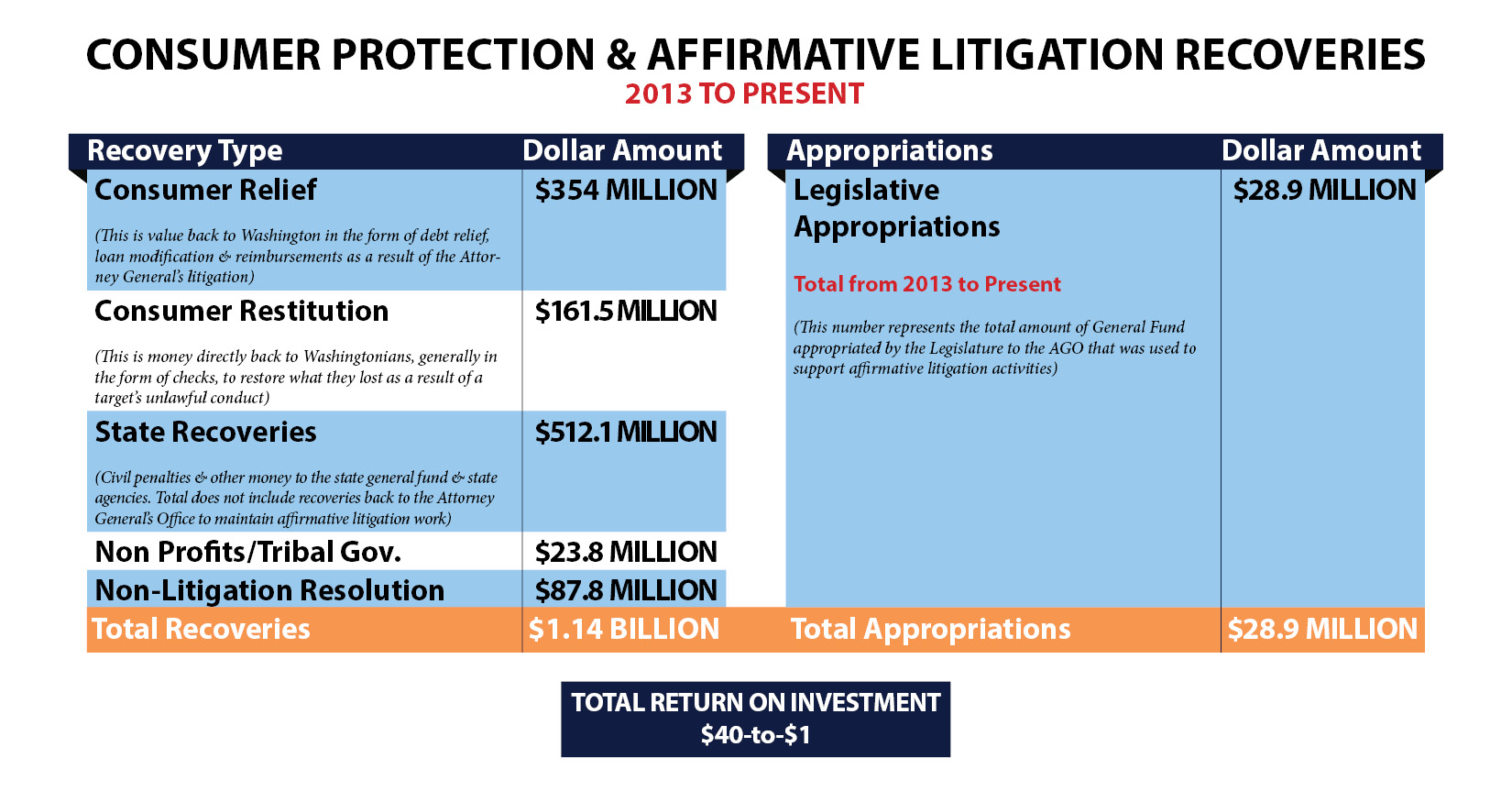 The totals also do not include recoveries for the state’s Public Disclosure Transparency Account from campaign finance cases. These cases include millions of dollars in recoveries from enforcement actions against the Grocery Manufacturers Association, Tim Eyman, Google, Facebook and Twitter.

Finally, these totals do not include recoveries from successful cases brought by the Attorney General’s Office on behalf of state agencies.

In January 2013, the Attorney General’s Office employed a total of 16 assistant attorneys general in its Consumer Protection and Antitrust Divisions. The Civil Rights Division, Environmental Protection Division and Complex Litigation Division did not exist. The Torts Division had a complex litigation unit, but the unit only handled lawsuits brought against the state. Medicaid Fraud was a unit in the Corrections Division.

Today, more than 100 assistant attorneys general and a similar number of investigators and professional staff work in these six affirmative litigation divisions.

These divisions generate revenue for the state, meaning they return more money to the state than they receive in the form of appropriations. They protect the public and ensure that the cost of litigation necessary to enforce consumer protection, antitrust and anti-discrimination laws are borne by the violators.

Over the last 11 fiscal years, the Legislature has provided a total of $28.9 million in state funding for these six legal divisions – an average of $2.6 million per year. Collectively, these divisions have an annual budget of more than $50 million. Consequently, they primarily fund themselves through the recovery of costs and fees in successful cases. Cost and fee recoveries that fund ongoing work are not included in the recovery figures announced today.

In 2017, the Tri-City Herald editorialized: “[Attorney General Ferguson has] done something we don’t often see in government: He’s running his office like a business. …The Attorney General’s Office is able to keep money earned in a settlement. So rather than just keeping the staff at the status quo and covering costs, Ferguson has added employees as well. More attorneys mean more bad actors can be brought to justice. And it’s not costing the state a dime. The office is earning the money it needs to operate and expand on its own. And then giving the surplus to the state.”

The office is currently in trial in King County Superior Court against the three largest distributors of opioids — McKesson Corp., Cardinal Health Inc. and AmerisourceBergen Drug Corp. Ferguson’s lawsuit, filed in 2019, asserts the corporations made billions of dollars feeding the opioid epidemic by shipping huge amounts of oxycodone, fentanyl, hydrocodone and other prescription opioids into the state even when they knew or should have known those drugs were likely to end up in the hands of drug dealers and addicts.

Trials completed in the past two years include: