SEATTLE — Attorney General Bob Ferguson filed a lawsuit today against Albertsons, Kroger and Rite Aid, whose pharmacy chains helped fuel Washington state’s opioid epidemic. Ferguson asserts the pharmacies served as the last line of defense in the opioid supply chain and failed in their collective responsibility to prevent the overuse of opioid prescriptions.

Ferguson also announced today resolutions with five other companies that produced or sold opioids. This will bring Washington state’s total recoveries to more than $1.1 billion for funding opioid abatement and treatment programs.

These announced resolutions are not final until certain conditions are met:

If the resolutions become final, these amount will be split between the state, county and city governments similar to Washington’s opioid distributor resolution.

“Opioids tore apart Washington families, overburdened our health care system and caused an epidemic of addiction we are still struggling to contain,” Ferguson said. “My office won a billion dollars to help fund recovery efforts, but I am not done. I will continue to hold accountable the corporations that enriched themselves off the suffering of Washington families.”

Ferguson filed the lawsuit in King County Superior Court against Albertsons, Kroger and Rite Aid. Those companies also acquired pharmacy chains like Safeway, QFC, Fred Meyer and Bartell Drugs. The lawsuit asserts they collectively ignored federal regulations, put profits over safety and knowingly oversupplied prescription opioids into Washington state. This oversupply led to a separate illegal market that flooded communities with highly addictive and dangerous drugs and local governments are still coping with the damage these pharmacies helped cause.

This led to predictable failures.

All three corporations have a history of filling prescriptions that came from medical providers whose prescribing license was suspended or revoked. All three corporations also previously paid penalties for violating federal rules regarding opioids. For instance, Bartell Drugs paid an $800,000 fine in 2020 for allegations it filled prescriptions from medical providers whose licenses had been suspended or restricted at least 400 times.

Ferguson asserts the pharmacies’ conduct was an unfair business practice that violated the state Consumer Protection Act. He also asserts their conduct violated the state’s public nuisance law by contributing to the opioid crisis in communities across the state. The lawsuit asks the court to award penalties of $7,500 for each violation of the Consumer Protection Act and take injunctive actions to prevent further damage to communities. Ferguson expects this could total hundreds of millions of dollars or more.

As part of the resolutions, CVS, Walgreens and Walmart will tightly monitor opioid prescriptions and prevent patients from seeking multiple prescriptions.

The estimated $434.4 million in resolutions from these companies as well as others like Purdue, McKinsey, Mallinckrodt and the three major opioid distributors will bring Washington state’s overall total to more than $1.1 billion to help fund the state’s opioid abatement and recovery programs. 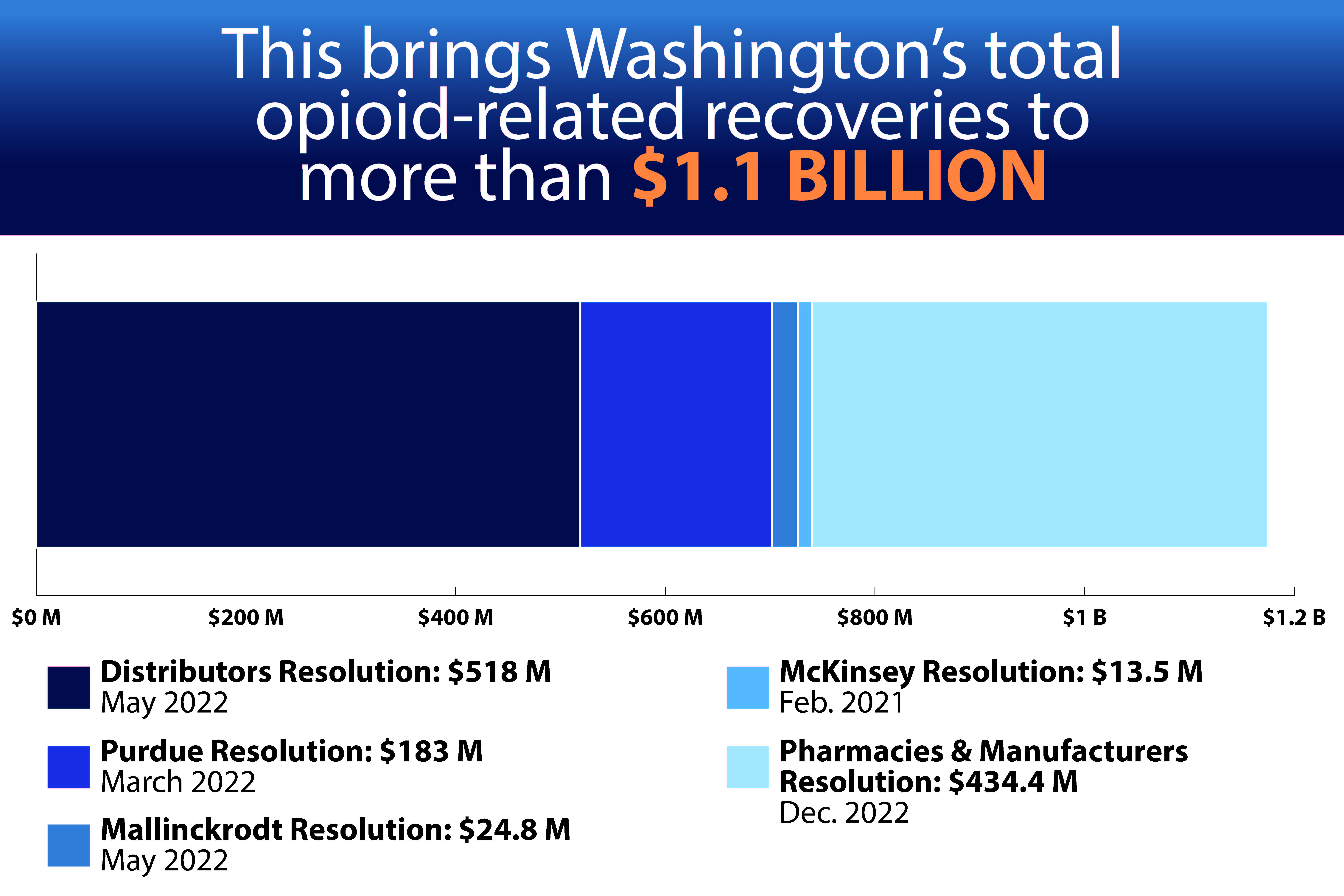 In October, all 125 eligible local governments signed onto the $518 million resolution stemming from Ferguson’s earlier lawsuits against opioid distributors. Similarly, local governments will also need to sign onto these new resolutions to accept half of the funds from the CVS, Walgreens, Walmart, Teva and Allergan resolutions. The sign-on process is expected to begin in early 2023. The other half of the funds will go to the state to fund opioid remediation.

All of the funds are restricted for use with opioid remediation programs consistent with the state Opioid Response Plan. Recoveries can be used to address the Fentanyl epidemic.

A January 2020 lawsuit Ferguson filed against Johnson & Johnson, one of the largest suppliers of the raw materials used to produce opioid pain medications, is currently on hold. An appellate court is reviewing, at Ferguson’s request, Johnson & Johnson’s attempt during discovery to gather medical information from millions of Washington residents that is protected from disclosure and irrelevant to the case. The trial is likely to be rescheduled in 2023.

Ferguson asserts Johnson & Johnson, along with several of its subsidiaries, fueled the opioid epidemic in Washington state by embarking on a massive deceptive marketing campaign and convincing doctors and the public that their drugs are effective for treating chronic pain and have a low risk of addiction, contrary to overwhelming evidence. Johnson & Johnson deceptively marketed the long-term use of opioids at high doses without documented evidence of their effectiveness, ignoring the well-documented risks of its drugs.

That lawsuit is also filed in King County Superior Court.

Key facts from the opioid crisis in Washington state

The following are some key facts about the opioid crisis included in the lawsuit against the pharmacies: